Hillsborough County is a swing district in the swing state of Florida. Both Democrats and Republicans are sure that they will win. But party affiliation does not necessarily decide how Floridians ultimately vote. 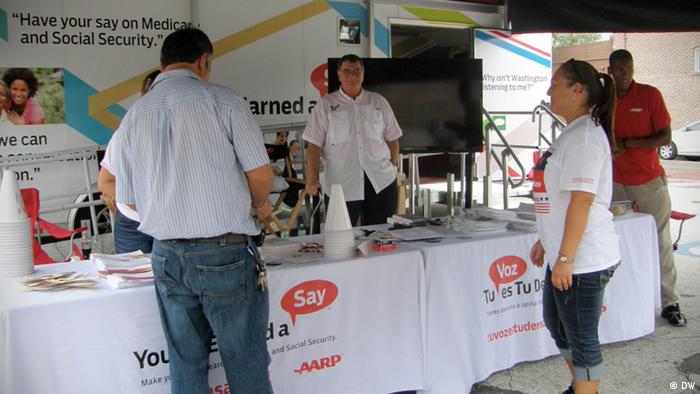 Joe Matta just had a back operation - he has problems with his knee and has to use a cane to walk. Despite his health complications, Matta braves the humid August heat of subtropical Florida, staffing an informational stand for the American Association of Retired Persons (AARP) on 7th Avenue in Tampa. The AARP, which says it represents the interests of senior citizens, is one of the most powerful lobby groups in the United States. And Matta wants to help the AARP in its campaign to preserve Medicare, America's public health care system for retirees. 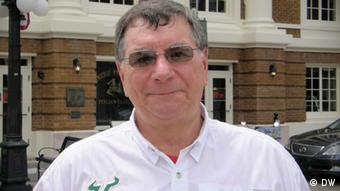 "It (Medicare) shouldn't just be for the people who are 55 and older right now, it should be for the younger people," Matta says. "My children and my grandchildren should be taken care of the same way that we are - not something less."

Matta, a two-time father, has four grandchildren. And although he is a registered Republican, he does not support Republican candidate Mitt Romney's plan for Medicare. The former governor of Massachusetts wants to turn Medicare into a voucher system for the younger generation. The youth of today would use those vouchers to buy private insurance when they become seniors. But the extent to which Romney's proposed voucher system would cover constantly rising insurance costs, remains an open question.

According to Matta, Mitt Romney and the Republicans have pivoted so far to the political right since the 1980s that "they don't seem to be caring about taking care of the people." Many people share Matta's view in Florida, a state where one-fifth of the voters are 65 years or older. A study conducted by the Washington Post and the Kaiser Family Foundation reported that 65 percent of Floridians want Medicare to retain its current form. And Americans who view Medicare as important are very likely to vote for President Barack Obama.

The issue of Medicare gives Obama an advantage in Florida, a so-called swing state that plays a decisive role in presidential elections. Floridians remain very conscious of their state's recount drama during the 2000 election, which the Supreme Court - in a controversial decision - ultimately ended, effectively calling the state in favor of George W. Bush. In 2004, 52 percent of Floridians voted for Bush, aiding his return to the White House. But in 2008, 51 percent of voters here supported then-senator Obama. Hillsborough County, a district in Tampa, voted for the winner in all of those elections.

Nearly half of Florida's voters live in a broad strip that stretches from Tampa on the western Gulf Coast to Orlando on the Atlantic side of the state, according to Susan McManus, a political scientist at the University of South Florida.

"It is equally divided between Democrats and Republicans, and about one-fourth of the rest of the voters are independents." McManus says. "So it's clearly the swing part of the swing state." 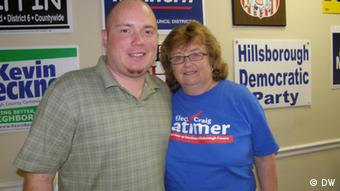 The 60-year-old Sally Phillips is one of the delegates for the Democratic Party, who nominated President Obama as the party's candidate at the convention in Charlotte, North Carolina. Her partner accompanied her to the convention. Sally is the chairwoman of the Florida Democratic Party's caucus for Lesbian, Gay, Bi- and Transsexuals. She worked at General Motors for 35 years and just went into retirement.

Sally, who for years has voted Democrat, admits that party enthusiasm has waned since 2008.

"It's because some people are not as happy with Barack Obama, but I think that only has to do with the fact that he has been working with a legislature that just has not been real effective with him," she says. But Sally believes that if Obama fails, "then the American people fail."

Chris Mitchell, the district chairman of the Democratic Party, agrees with Sally.

"It's really, really going to be a turning point in this nation's history, if President Obama is not re-elected," Mitchell says.

The future course of US economic, social and foreign policy is at stake. Democrats in Hillsborough Country can actually breathe a sigh of relief, because they have 55,000 more registered voters than the Republicans. But the independents will decided which way the county goes, according to Mitchell. And it's not without reason that the Republicans are confident of victory.

Art Wood, the chairman of the local Republican Party, says there's "no way" that the Democrats will win Hillsborough County. "It'll be over my dead body," Wood jokes. The party chairman is confident that the Republicans do not face the same challenges in Florida that they did four years ago. 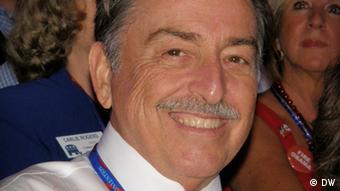 Wood is confident that the Republicans will win Hillsborough

"What happened four years ago is many of them just peeled away and stayed away, after their candidate lost," Wood says. "They did not get behind McCain, and there's almost none of that now."

The nomination of Paul Ryan as Romney's running mate has energized the party base, according to Wood. The congressman from Wisconsin is considered to be a fiscal conservative, and he has presented a controversial budget that seeks to reduce the deficit by slashing public spending, instead of raising taxes.

"By sort of mating together Ryan with his plans, with Romney with his vision, I think we have a great combination," Wood says.

The residents of Hillsborough County are interested in the same issues as people elsewhere in nation, explains Wood, who cites jobs, debt and the poor economy.

"Everyone knows somebody who has a home in foreclosure, or has a spouse or a child who is unemployed, or a college graduate who has to live at home because the economy isn't strong enough to support them," Wood says. "The economy is the issue."

But Woods is not fazed by that fact or the reality that the Democrats have more registered voters in Hillsborough County than the Republicans. He says many Florida Democrats will vote Republican this time around. Henry Gonzalez, a 44-year-old banker who has been unemployed since the summer, agrees with Woods' assessment.

"My Dad is going to be 76 in November," Gonzalez says. "He was a registered Democrat until three years ago. But he always, in the general election, voted Republican."

According to Gonzalez, that's because - until recently - mostly Democrats competed in the races for the local elected offices. Anybody who wasn't a registered Democrat couldn't vote in the primaries. Gonzalez changed his party registration 10 years ago. His mother did the same five years ago.

For Gonzalez, the economic situation is the main issue for him this election cycle. He says his life is not better than it was four years ago.

"My taxes are higher as a percentage of my income, I tell you that my health care is probably about the same, but the cost of everything, including tuition for my children at a private school has gone up, everything else has gone up, and my income has not kept pace with that," the former banker says.

It will again be a tight race in Hillsborough County and also in Florida. And according to the political scientist McManus, "there is no county better than Hillsborough, which is the one that Tampa is in, that predicts how the state of Florida at-large is going to vote."

Hillsborough, like Florida, is a microcosm of American society. There are young and old, rural and urban regions, and the suburbs of Tampa. There are African-Americans and Latinos from Cuba and elsewhere. One-fourth of the voters belong to a minority. Everyone has their own history and their own reasons to vote for the candidate that they have decided on.

Social issues unlikely to play decisive role in US election

Although social issues divide the US public, they rarely decide presidential elections. But over the long-term, a growing Hispanic community and a shift in views on gay marriage could push voters to the Democrats. (08.10.2012)