Fish stocks threatened by Fukushima leaks | Asia| An in-depth look at news from across the continent | DW | 14.08.2013

For more than two years, tons of radioactive water has been seeping daily into the ocean from Japan's crippled nuclear plant in Fukushima. Experts examine the impact on fish stocks and how the leaks could be stopped. 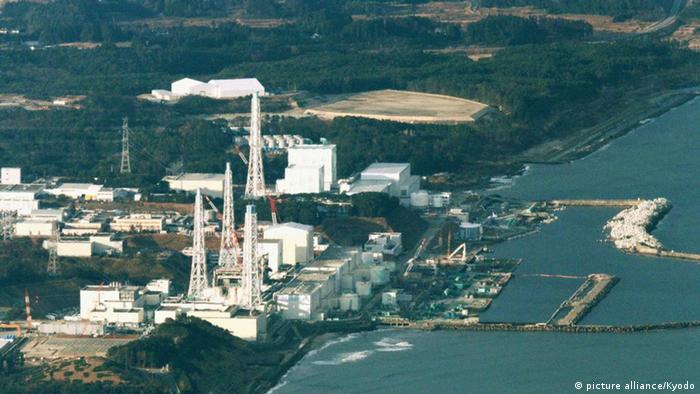 In an interview with Reuters news agency, an official from Japan's Nuclear Regulation Authority called it an "emergency." An estimated 300 tons of radioactive water has been leaking every day into the Pacific Ocean since the Fukushima Daiichi nuclear plant suffered a meltdown following a massive earthquake and ensuing tsunami that hit Japan on March, 11, 2011. The amount of water leaking into the sea is enough to fill one Olympic-size swimming pool in about a week. The announcement came shortly after plant operator TEPCO stated the protective barriers installed to prevent toxic water from spilling into the ocean were no longer coping with the groundwater levels.

The statement confirmed long-held suspicions that the sea was being contaminated. Local fishermen and independent researchers had already suspected a leak, but Japan's largest utility continued to deny the claims until it finally conceded last month. But even more worryingly, the company also admitted that groundwater and soil samples taken at the plant were showing high levels of potentially cancer-causing isotopes, including cesium-137, tritium and strontium-90. Now TEPCO has started pumping out radioactive groundwater from a pit to reduce the leakage.

In Japan, where eating fish is a vital part of the nation's culture, people are anxious about seafood safety. There seems to be a consensus among experts that the fish off the coast of the crippled nuclear plant are contaminated, as they are still being exposed to cesium-137, a small portion of which is believed to be trapped in the sediment in coastal waters. 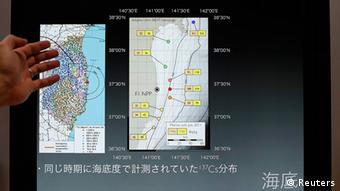 According to Ken Buesseler, a senior scientist at the US-based Woods Hole Oceanographic Institution, periodical measurements conducted by the Japanese government have revealed that cesium-137 levels in bottom-dwelling fish, including many important commercial species, are highest off Fukushima.

These monitoring results are also used to keep fisheries near the stricken reactor closed and to keep an eye on neighboring areas where levels are approaching the regulatory limits. "Fishing for many species is currently banned off Fukushima," the expert told DW.

No immediate risk for humans

But Buesseler also pointed out that fish rapidly lose the cesium accumulated in their muscles after exposure stops. "Fish that migrate to less affected waters will gradually lose much of their Fukushima-derived cesium," he said, adding that there was no immediate risk for humans eating fish from outside the contaminated areas off the Japanese coast.

Claims made by Japanese utilities company TEPCO that it has the situation under control in Fukushima have proved false. Radioactive material continues to leak into the sea, forcing the government to step in. (14.08.2013)

Twenty-eight months after the second-worst nuclear accident in history, four of Japan's utilities companies prepare to file applications to restart 12 reactors. Critics say problems at the plants have not been addressed. (04.07.2013)

This is corroborated by Günter Kanisch from the Hamburg-based Thünen Institute of Fisheries Ecology. The expert states that since January 2013, more than 90 percent of all cesium values measured in fish in the Fukushima area have been below the Japanese regulation value for food consumption of 100 becquerels per kilogram. "Moreover, since May 2013, 90 percent of the fish sampled were even below 50 Bq/kg, " he told DW.

However, scientists remain concerned about the contamination of marine life in the long run. Both Buesseler and M. V. Ramana, a scientist and researcher at the Nuclear Futures Laboratory, Princeton University, warn that while some of the radioactive materials leaked will mix with the ocean water and become diluted, others, like Strontium-90 will get bound up in ocean sediments or accumulate in living creatures at concentrations greater than the surrounding water.

"Strontium-90 behaves just like calcium and tends to concentrate in the bone rather than being cleared out of the body," Ramana explained.

Jota Kanda, a professor at Tokyo University of Marine Science and Technology, says that most of the contamination found today in the seafloor did not occur recently but rather during the first couple of months after the nuclear disaster. He told DW that the current input of radioactivity is far smaller than that stemming from the major leaks that followed soon after the meltdown. Kanda stresses, nonetheless, that it could take decades for elements like cesium to dissipate from the seabed, thus posing a long-term challenge to coastal fisheries.

According to Shunsuke Managi, environmental expert at Tohoku University, Japanese fisheries reported a $10.5 billion loss in infrastructural damages in 2011. On top of that, Managi told DW he estimates that the local fisheries lost up to $2.6 billion in revenue that same year and at least one billion more in 2012. 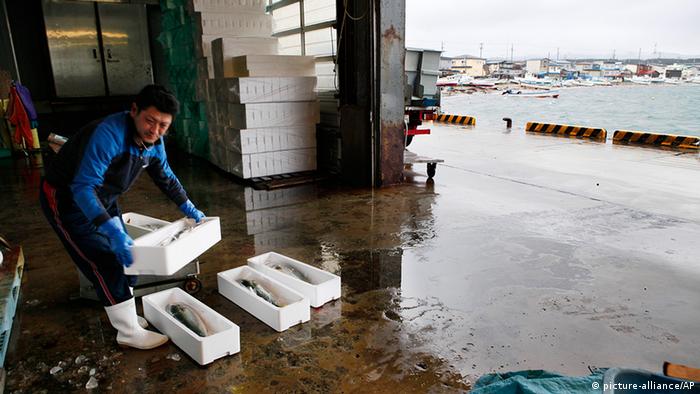 Japan's fisheries have suffered billions of dollars in losses

A frozen wall of earth

It remains unclear whether Tepco will be able to prevent radioactive water from seeping into the ocean anytime soon, especially since the company doesn't seem to know where exactly the leakage is taking place. In light of the urgency of the situation, Prime Minister Shinzo Abe pledged deeper public involvement in the clean-up of the stricken plant. An initial sum of 40 billion yen ($400 million) is being discussed by the government.

The money is to be used for a project to surround the reactor buildings with a wall of frozen earth to block underground water from entering the contaminated buildings, an idea which Michael Golay, professor of nuclear science and engineering at the Massachusetts Institute of Technology believes is worth trying. "This is a common technique used in civil projects to try to stabilize the soil."

However the technology, used in subway construction, has yet to be tested in this context. Further, Ramana pointed out, there are questions about how this structure, set to be completed by July 2015, would behave in the event of another earthquake or even if there was a temporary loss of electric power supply.

Running out of storage space

But the Fukushima plant is also facing a storage problem. The reactors need hundreds of tons of water daily to cool the radioactive fuel. This water becomes contaminated and is difficult to store in the quantities in which it is produced.. 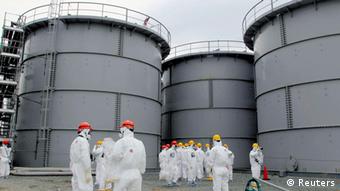 TEPCO has built more than 1,000 tanks to store the mixed water, but the firm could soon run out of space

Workers have built more than 1,000 tanks to store the mixed water, but with more than 85 percent of the 380,000 tons of storage capacity already filled, critics fear the company could soon run out of storage space.

The groundwater leaks are bound to worsen if TEPCO and the Japanese government don't manage to contain the problem soon. Kanda therefore argues that the careful assessment of leak source may enable the plant operators to reduce the leakage substantially.

The expert in marine science makes clear, however, that the major effort should be aimed at preventing another large leakage, since there is a "substantial amount of radioactive water" in the basement of reactor housings, underground trenches, and temporal storage tanks on the ground. "The proper management of these waters should be given the highest priority," Kanda emphasized.

Would you eat Fukushima fish? Join the discussion on Facebook!