China has launched a space shuttle, Shenzhou 9, carrying the country's first ever female astronaut. The shuttle is expected to perform a 'space kiss' with the Tiangong 1 space module. 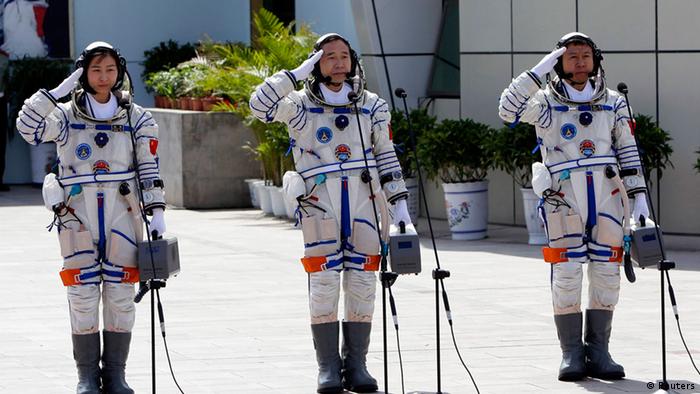 The Shenzhou-9, which means "divine vessel," was launched into space on Saturday from the Jiuquan Satellite Launch Center in the Gobi Desert in China's northwest. It is carrying the first ever female "taikonaut," as China calls its astronauts.

All systems functioned normally and, just over 10 minutes later, it opened its solar panels and entered orbit. The spacecraft is expected to dock with the orbiting space module Tiangong 1 ("heavenly palace"), which was launched last year. The Chinese government has not specified how long the mission will last.

Liu Yang, a 33-year-old former Chinese air force pilot, was officially announced on Friday as being part of the three-member crew. The two other crew members are veteran astronaut Jing Haipeng and newcomer Liu Wang.

The launch is seen as many as being a milestone in the fight for gender equality in the People's Republic.

A total of 56 female astronauts have been sent into space so far; 46 from the US, three from the former USSR, as well as three Russians, two Canadians and two Japanese.

This is the latest step that brings China closer to its goal of owning a space station by the year 2020. The Chinese station will be considerably smaller than the 16-nation International Space Station (ISS). Beijing started its own space station program after being turned away from the ISS.

An unmanned Shenzhou 8 spacecraft returned to Earth in November after completing two space dockings with Tiangong-1 in the nation's first ever hard-to-master "space kiss" - bringing together two vessels in orbit at high speed.