Four storage tanks at Libya's Ras Lanuf terminal have been set ablaze following an attack by "Islamic State" ("IS") militants. Libya's National Oil Corporation said the situation was "catastrophic for the environment." 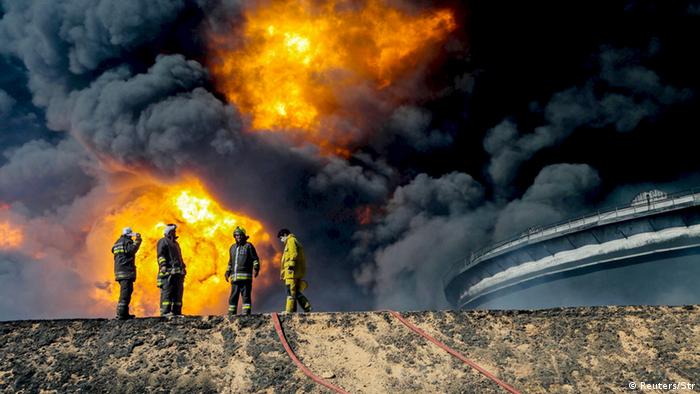 Libya's National Oil Corporation said in a statement on Thursday that fighting in the Ras Lanuf region had resumed around dawn. Along with the nearby Al-Sidra facility, Ras Lanuf's terminal is one of Libya's main oil export hubs. The storage tankers belonged to the Harouge Oil Operations company.

"Storage tanks filled with crude have caught fire," the statement read, adding that nearby high-voltage power lines and electrical towers had also been downed.

"The situation in Ras Lanouf is catastrophic for the environment," the Oil Corporation said.

National Oil Corporation Chairman, Mustafa Sanalla, said the terminal, which has been shut since December 2014, would remain closed for "a long time" due to damage from Thursday's fire and earlier attacks.

State news agency LANA reported that IS militants were behind the attack launched as they continued their attempts to seize key export terminals.

In a separate blaze earlier in January, around 1 million barrels of oil were lost due to fires caused by fighting, also near Ras Lanuf.

IS has launched several attacks, aimed specifically at facilities in the "oil crescent" along Libya's northern coast, from its base in the city of Sirte in recent weeks.

The north African country sits on an estimated 48 billion barrels in oil reserves, the largest on the continent. Since Moammar Gadhafi was ousted in 2011, production has drastically deteriorated, however, as political and armed factions fight for power and Libya's oil wealth.

The attack on Thursday came just days after Libya's UN-backed unity government announced plans to bring the country's warring factions together under one umbrella.

The Tunisia-based Presidential Council named 32 ministers, although reports of disputes over the distribution of posts have put a damper on the list's release.

A UN Security Council resolution is aimed at uniting many of Libya's fighting factions. But it would nonetheless open the door for Western airstrikes against Islamic State militants inside the country. (24.12.2015)