The ex-employee, who notoriously posited that "biological causes" explained why many of Google's senior staff were male, now argues that he was unfairly dismissed. He's the lead plaintiff in a class-action lawsuit. 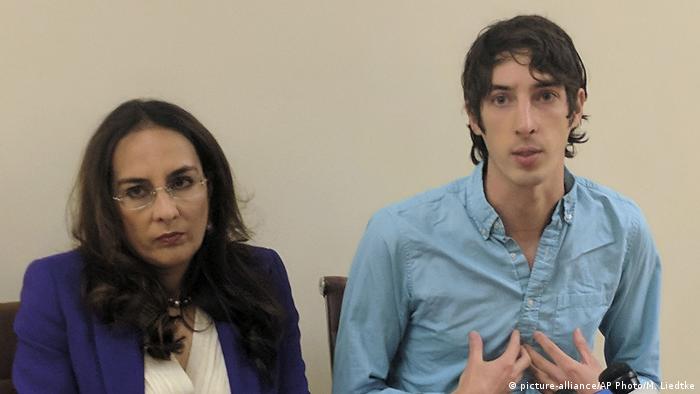 A former Google engineer who was fired over a memo he wrote about the company's hiring quotas, filed a lawsuit against the US tech giant on Monday, alleging it discriminates against men, conservatives and Caucasians.

James Damore was dismissed in August for violating Google's code of conduct, after he posted an internal memo saying that fewer women than men worked in the tech industry because of biological differences.

Google Chief Executive Sundar Pichai told employees in a note that portions of the anti-diversity memo "violate our Code of Conduct and cross the line by advancing harmful gender stereotypes in our workplace."

The 161-page class action lawsuit claims Google "ostracized, belittled and punished" him and others "for their heterodox political views, and for the added sin of their birth circumstances of being Caucasians and/or males."

Google "employs illegal hiring quotas to fill its desired percentages of women and favored minority candidates, and openly shames managers of business units who fail to meet their quotas — in the process, openly denigrating male and Caucasian employees as less favoured than others," the lawsuit said.

The lawsuit was filed in a court in Santa Clara, in California's Silicon Valley.

Damore is the lead plaintiff in the lawsuit, which has also been filed on behalf of other people who could be categorized into three "subclasses of individuals" that Google discriminated against, Damore's attorney, former Republican Party official Harmeet Dhillon, said in a Monday press conference posted on Facebook.

The three subclasses are conservatives, Caucasians and men.

"All three subclasses happened to James because he is all of those three, but I want to be very clear that the lawsuit classes include women, they include people of colour who happen to fall into one of those three classes," Dhillon said.

She added that Google had retaliated against Damore for "raising workplace issues" and in doing so violated provisions of California and federal law relating to discrimination.

In Damore's memo, he wrote that "the distribution of preferences and abilities of men and women differ in part due to biological causes … These differences may explain why we don't see equal representation of women in tech and leadership."

Damore said women displayed "extraversion expressed as gregariousness rather than assertiveness" and "higher agreeableness … This leads to women generally having a harder time negotiating salary, asking for raises, speaking up, and leading."

He also said women exhibited "more neuroticism," with higher anxiety levels and lower stress tolerance. "This may contribute to the higher levels of anxiety women report on Googlegeist and to the lower number of women in high stress jobs," Dalmore wrote.

At the press conference, Damore defended the comments made in the memo. "There is definitely a lot of discrimination in that certain programs are not open to certain people," he said.

"I believe the document I wrote and the comments that were shared showed that this was a common experience," he added.

Google's new Vice President of Diversity, Integrity and Governance, Danielle Brown, responded to Damore's document in a memo to Google employees, saying, "Like many of you, I found that it advanced incorrect assumptions about gender."

Iceland is in many ways a model country in matters of feminism. Yet here, too, women earn less than men. They are striking to try to change this. (26.10.2016)

The treat of a possible class action lawsuit against Google for systematically paying women less across the board has so far been downplayed by the company. It is also no surprise to many Germans. (15.09.2017)