Fire at Berlin metro station injures 4, 1 of them seriously 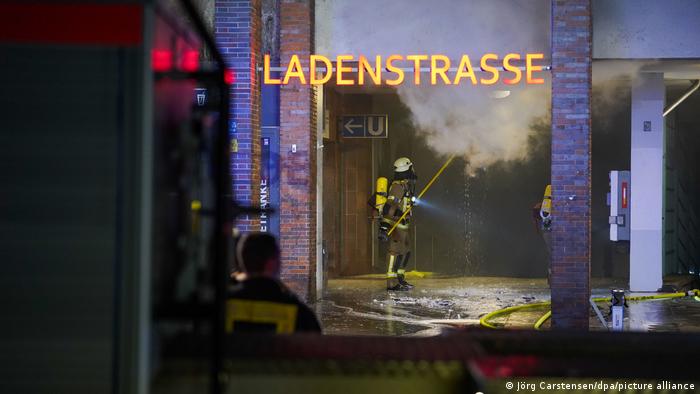 Four people were injured after a huge fire at a Berlin metro station Sunday night. Firefighters spent the evening through the small hours of Monday trying to quell the blaze, which spread to the roof of the Onkel Toms Hütte station in the southwestern neighborhood of Zehlendorf.

Around 120 firefighters were initially deployed to the scene, when the department was called around 9 p.m. local time. The fire was largely under control by late Sunday evening, but 15 firefighters were still managing the blaze the morning after.

Of the four people injured, one was seriously hurt and was flown with burns by helicopter to a clinic, according to the Berlin Fire Department. Three others, including a child, suffered from mild smoke inhalation and were treated on-site.

"A shop and the roof of the train station at the subway station Onkel Toms Hütte are burning. The firefighting has started. We are currently working here with around 90 employees," the Berlin Fire Department tweeted on Sunday night.

The fire initially broke out at a snack bar in the station, and later spread to two other shops. The flames were meters high, according to witnesses, but both the cause of the blaze and extent of the damage were still unclear on Monday morning, as the fire was largely contained but embers around the station still burned.

The blaze forced an interruption on the U3 subway line between Breitenbachplatz and Krumme Lanke, and an emergency bus service was used to fill the gap.

The fire department said the fire was under control on Monday morning. "Now openings must be made in the roof using special saws. Our drone is taking thermal imaging recordings in the areas that we can no longer reach," the department tweeted.

Germany summoned the Russian ambassador and expelled two diplomats after an alleged FSB operative was found guilty of killing an ethnic Chechen. The 2019 murder took place in broad daylight in central Berlin.