The secret recipe for a herbal pesticide allegedly contained massive amounts of the banned substance Fipronil. The two managers who sold the treatment will be held pending further investigations into the scandal. 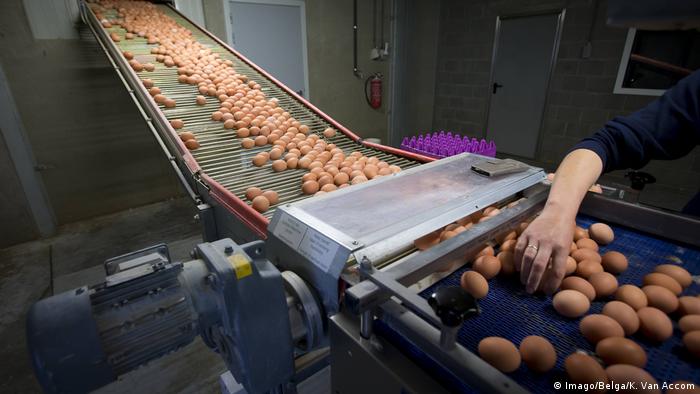 Two alleged ringleaders behind a tainted-eggs scandal that has engulfed Europe faced court in the Netherlands on Tuesday.

The men were identified by Dutch media as 31-year-old Martin van de B. and 24-year-old Mathijs I.J. They appeared at a closed hearing at the Overijssel District Court in the central Dutch city of Zwolle.

"The public prosecution service suspects the two managers of a disinfection company of using Fipronil at poultry farms in the Netherlands," the court said in a statement.

"Thereby they endangered public health, and there are suspicions they knew that the biocide was banned."

The suspects were arrested on Thursday during police raids in the Netherlands and Belgium on eight premises, including the pair's company, Chickfriend.

They will be held pending further investigations, the court ruled.

The fipronil scandal has affected 17 European countries to date and spread as far afield as Hong Kong and South Korea.

Fipronil is a broad-spectrum insecticide commonly used to rid livestock of fleas, lice and ticks. It is banned by the European Union from use in the food industry as it can damage the human kidney, liver and thyroid gland.

The managers of the poultry farm cleaning business reportedly promised farmers that their secret recipe could quickly rid hens of their farms of poultry mite for eight months. But their secret herbal compound, Dega 16, allegedly contained large amounts of the banned Fipronil.

They allegedly sourced their fipronil from Belgian business Poultry Vision, which in turn had sourced it from a chemical manufacturer in Romania.

Read more: Why toxic chemicals keep sneaking into our food

Authorities knew about fipronil in November

In the ensuing scandal, Belgian claimed that Dutch authorities were tipped off about the substance in November 2016 but had not alerted European authorities. Belgian authorities knew about the scandal in June but also did not say anything until late July.

Authorities only publicly announced on August 1 that they had detected the banned substance in eggs that had been distributed across Europe, leading to millions of eggs being pulled from supermarket shelves and destroyed and dozens of poultry farms being closed.

The scandal was estimated to have cost poultry farms at least 150 million euros ($175 million), a spokesman for the ZLTO federation of southern Dutch farmers and gardeners said Monday.

The EU insisted that there was no threat to humans.

Police in the Netherlands have detained two men suspected of being involved in the illegal use of a pesticide in the poultry industry. Millions of fipronil-contaminated eggs have been recalled since the scandal broke. (10.08.2017)