Since the outbreak of the financial crisis in 2007, financial institutions have paid more than Qatar's GDP in fines for their wrongdoings. As investigations and lawsuits continue, that number is expected to grow. 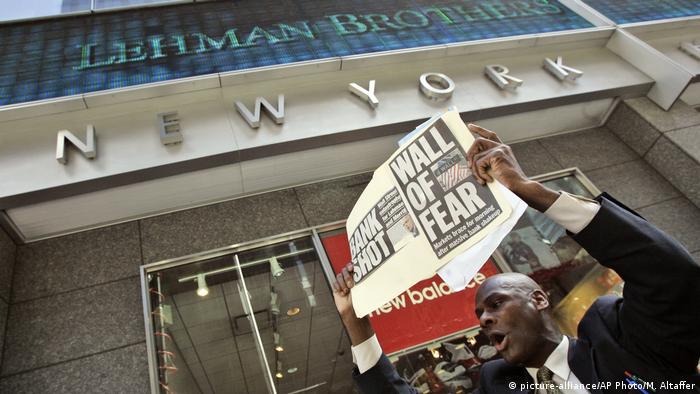 $150 billion (127.6 billion euros) - that's how much US authorities have collected in fines from financial institutions for shady dealings with subprime mortgages since the beginning of the credit crisis in 2007, according to research by the British business daily Financial Times (FT).

The FT report comes on the 10th anniversary of the onset of the global financial crisis, which led to the Great Recession, whose profound societal, economical and political repercussions are still reverberating today.

August 9, 2007, the day French bank BNP Paribas barred investors from accessing money in funds with subprime mortgage exposure, is widely regarded as the watershed moment when the disaster started unfolding. Subsequently, governments everywhere had to spend billions in taxpayers' money to bailout the financial sector.

Even though it wasn't until the August of 2007 that the financial crisis took on staggering proportions, it was the bursting of the US real estate bubble that made the market meltdown possible in the first place. After US house prices peaked in April 2006, an unprecedented decline began that affected the quality of the loans that had paid for them. 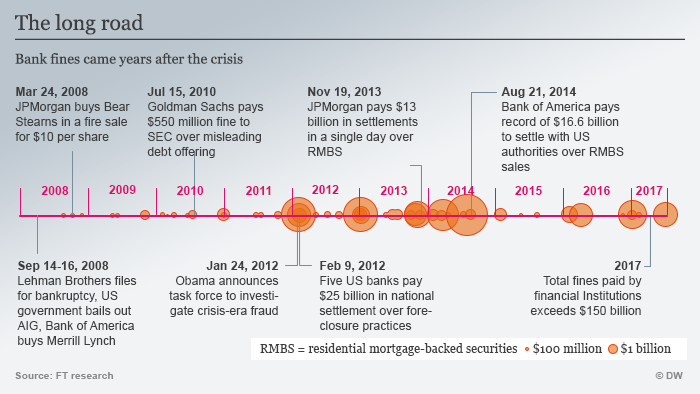 When the value of homes started falling and interest rates of subprime mortgages increased, it became more difficult for borrowers to refinance their loans. Packaged into so-called mortgaged-backed securities (MBS) and marketed with positive rankings from international ratings agencies, those toxic assets, however, had already become hot sellers among investors all over the world, including many German regional banks.

Then, on August 9, when BNP Paribas shut access to several investment funds with US subprime mortgage exposure, the whole extent of the sham came to light.

In the past 12 months alone, the American justice department fined three European big banks $19 billion. First, the US Department of Justice fined Deutsche Bank and Credit Suisse a combined $12.5 billions. And just last month, Royal Bank of Scotland agreed to a $5.5 billion settlement with the Federal Housing Finance Agency. Those three payments drove the sum total over the landmark figure of $150 billion since 2007.

Deutsche Bank's $7.2 billion settlement to resolve its dealings in mortgage-backed securities is roughly a third of the entire amount it had to pay since the outbreak of the financial crisis.

While the FT valued the bank fines at said $150 billion, a Boston Consulting Group (BCG) report said fines had added up to $321 billion.

That number, however, includes penalties for crimes such as money laundering, terrorist financing, benchmark interest rate rigging and violating US sanction law. According to this calculation, European banks have paid back $118 billion, compared to $204 billion by US institutions. 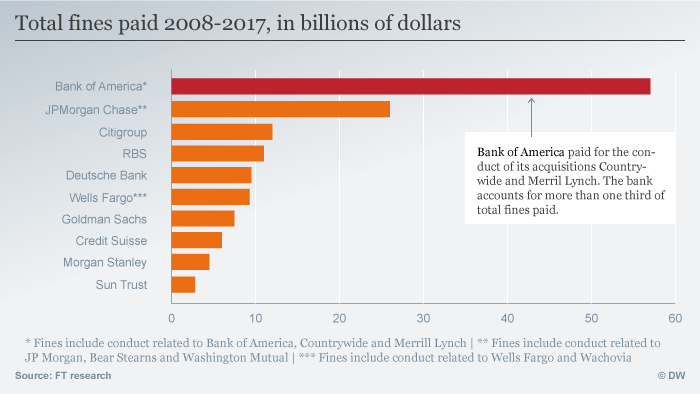 Of all the banks penalized since 2008, Bank of America (BofA) was hit the hardest by far, as FT research shows. So far, BofA has handed over a whopping $56 billion - more than one third of total fines paid - in settlements to cover the institution's own mortgage sales as well as the conduct of subprime mortgage lender Countrywide and broker Merrill Lynch, two companies it had acquired.

JP Morgan Chase, the owner of Bear Stearns and Washington Mutual, has paid the second-largest amount with $27 billion.

The Financial Times analysis looked at "conduct ranging from the faulty underwriting of mortgages, improper foreclosure practices and discriminatory lending to the mismarking of auction rate securities." The lion's share of the $150 billion total - $89 billion - settled "allegations that institutions misled buyers of securities backed by mortgages."

US has recouped costs, but others may not

In 2015, the International Monetary Fund (IMF) analyzed costs of the state bailouts of crisis-stricken banks that ensued, calculating the extra debt taken on by governments relative to the size of their economy. It also looked at how much banks had paid back.

With the exception of the US, no country had recouped the full amount of taxpayers' money, the IMF reported. In fact, the US has not only gotten back every dime it used to rescue banks, it has recovered more than the total cumulative impact of the bailout. Even now that US banks have handed over their loans with interest, the money still keeps flowing, as US mortgage giants Fannie Mae and Freddie Mac continue to give money to the US treasury each quarter.

By contrast, according to the FT, other countries might never fully break even, thus having to deal with the consequences of higher public debt for years to come.

While the US has had success with financial punishment, it is lagging behind other countries on the legal side of things. According to an analysis by US law enforcement agency Sigtarp, US prosecutors have convicted 324 individuals of crimes linked to the crisis. But not a single Wall Street CEO is among them. Instead, they come from Main Street: mortgage lenders, loan officers, real estate brokers and developers, among others. US authorities have said this is due to lack of evidence, not effort.

Iceland, by contrast, has prosecuted executives of three large banks as well as 23 other bankers. And in June, the UK announced charges against Barclay's John Varley and three other executives.

As new cases related to the crisis are still being filed and investigations continue, the $150 billion is likely to grow. Britain's Barclays bank, for instance, is currently fighting a Department of Justice lawsuit alleging the credit institute misled buyers of mortgage-backed securities.

The authors of the BCG report also expect "fines and penalties by regulators in Europe and Asia to rise in coming years."

Holding Wall Street CEOs to account, on the other hand, will be much more difficult, as the lack of cases has shown. "Our nation cannot afford to take our eye off the ball when it comes to crime or other illegal practices inside banks that require law enforcement response," Sigtarp's inspector-general Christy Goldsmith Romero told the Financial Times.

"If a corporation is engaged in illegal practices they should not be able to buy themselves out of accountability," he said. "The recoveries are important because there must be a cost."

On July 30, 2007, the first shockwaves of the nascent global financial crisis reached Germany. Germany's IKB bank for small and medium-sized companies, an institution only known to insiders, got into deep trouble. (28.07.2017)