The ruling ANC and opposition parties in South Africa have held their final rallies ahead of next week's election. The ANC has faced criticism for alleged corruption. 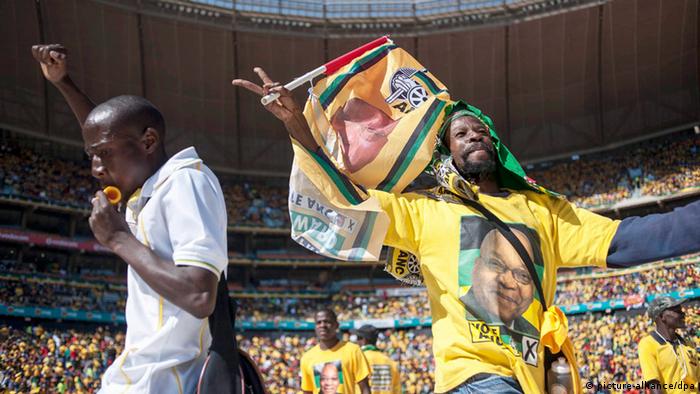 Tens of thousands of supporters of the ruling African National Congress (ANC) gathered at the FNB stadium near Johannesburg as President Jacob Zuma made his final pre-poll appeal to voters on Sunday.

Zuma entered the stadium to the sound of a military drumroll and cheers, avoiding a repeat of the humiliating boos which were heard in the same stadium during Nelson Mandela's memorial service last December.

Speaking at the rally of more than 90,000 people at the venue of the 2010 World Cup final near the Soweto township of Johannesburg, Zuma said "economic transformation would be a key priority" in the next administration after Wednesday's vote.

"Successful implementation will open more opportunities for African, Indian and Colored people as well as women, the youth and persons with disability, as we reverse the apartheid legacy," Zuma said. He promised to create six million "work opportunities" in the next five years if elected.

Pre-poll talking points have included allegations of corruption and misuse of state funds - including the high cost of Zuma's own residence.

Zuma was criticized in an anti-graft report last month for "benefiting unduly" from a state-funded security upgrade at his private home in Nkandla in rural KwaZulu-Natal, which included a swimming pool, amphitheatre and chicken run.

The ANC has countered accusations of negligence by pointing to the 2.5 million low-cost homes built since apartheid, as well as improvements in services for townships.

The party has won every general election since South Africa became a full democracy in 1994 and is expected to win again on Wednesday. An Ipsos poll on Friday predicted the ANC would take 63 percent of the vote, a slight drop from the 65.9 percent it achieved at the last elections in 2009.

Ipsos forecast the main opposition party, Democratic Alliance (DA) would get 22 percent of the vote, up nearly six percentage points from the last election.

The DA is seen as the political home of privileged white communities. It is predicted to do well in Gauteng - which includes Johannesburg and Pretoria - and the Northern Cape, in addition to the Western Cape, which it already runs at provincial level. Led by Helen Zille, the Johannesburg-born daughter of German parents, the centrist DA is a member of the Liberal International and the Africa Liberal Network.

Another challenger is Julius Malema, the former, and expelled, leader of the ANC's youth wing who heads the Economic Freedom Fighters (EFF) party with about 5 percent support.

It has a far-left program around redistribution of wealth - including the expropriation of white-owned farms without compensation. Malema has an ongoing dispute with the tax authorities over claims for unpaid taxes.

There are concerns that a number of former ANC supporters will stay home on May 7 and not vote. Complaints about lack of jobs and services have been voiced widely ahead of the poll.

Unemployment runs at 25 percent. South Africa has about 25 million registered voters, roughly half the population.

There were two attacks on buses bringing DA members to an election campaign concert in Soweto's Walter Sisulu Square on Sunday.

The DA claimed in a statement: "Two severe stoning attacks have so far occurred in Alexandra and the FNB stadium vicinity," the statement said. The party claimed the attackers were ANC activists. The ANC has so far made no comment on the incidents.

Police confirmed two buses were pelted with rocks on Sunday morning in Soweto and Alexandra, but would not say who was behind the attack. "Apparently the bus was carrying DA supporters, but we don't know who stoned the bus," police spokesman Neville Malila said.

"In Alexandra, we also received the report of a bus that was stoned and no injuries were reported," Malila said. No one has been arrested for the attack but one driver was taken to hospital for treatment after the attack.