Final push in presidential election campaign | Asia| An in-depth look at news from across the continent | DW | 01.04.2014

Now that President Karzai's brother Qayyum has withdrawn from the race, three candidates have emerged as favorites for April's presidential elections in Afghanistan. Observers are hoping for a fair and peaceful outcome. 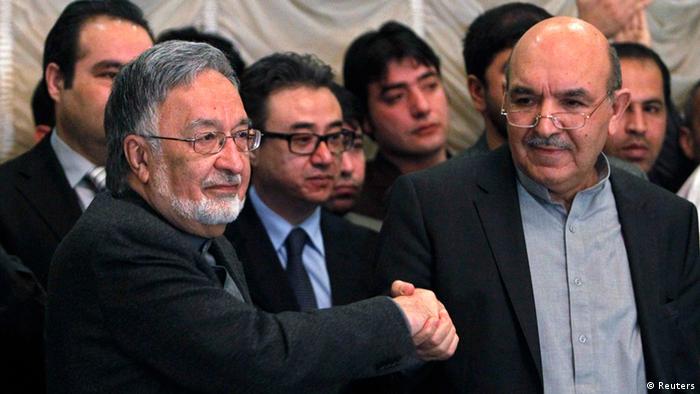 Less than a week before the April 5 presidential elections in Afghanistan, three candidates out of an initial eleven have the best chances of winning, according to observers. Qayyum Karzai (above right), the current Afghan president's brother, took one decision off voters' hands last week when he withdrew his candidacy in order to support Zalmay Rassoul (left).

Rassoul, a former foreign minister, is a close confidant of President Hamid Karzai. According to Nils Wörmer, Kabul office chief of the German foundation Konrad-Adenauer-Stiftung, "it became clear in the first weeks of the election campaign that Qayyum wouldn't mobilize enough votes."

Wörmer thinks that Qayyum Karzai was perhaps planning to join forces with a competitor from the beginning. "Now we know who is leading Hamid Karzai's political camp and his political machine," Wörmer added, explaining that if Rassoul were to move into the presidential palace, he would be representing Karzai's interests. 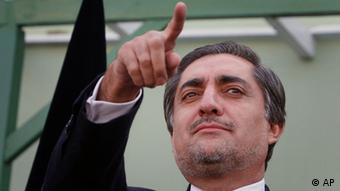 Apart from Rassoul, Abdullah Abdullah and Ashraf Ghani are among the favorites to win the election. The former Foreign Minister Abdullah, who played an important role in the Northern Alliance at the end of Taliban rule, is in charge of the opposition alliance he founded. He also took part in the 2009 presidential elections and came in second. This year, Abdullah's supporters are sure of his victory.

Thomas Ruttig from the Afghanistan Analysts Network, however, thinks Abdullah is at a disadvantage because his supporters are less unified than Karzai's. "Abdullah's political camp is dominated by a large number of people who are making claims to leadership but aren't able to agree."

According to Ruttig, economic expert and former Finance Minister Ashraf Ghani is currently trying to mobilize supporters across Afghanistan. His vice-presidential candidate Abdul Rashid Dostum, a controversial warlord from the north of Afghanistan, could help Ghani widen his support base. "But the question is whether the support of political and social groups will translate into actual votes," says Ruttig.

Although Hamid Karzai was initially installed as Afghanistan's president by the US after the Taliban's overthrow and was then re-elected amid fraud allegations, many hope this time the election will take place fairly and without Western involvement. 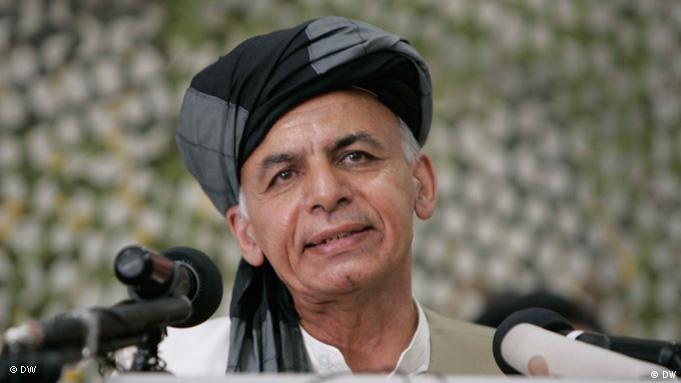 Ashraf Ghani is the economic expert among the candidates

Observers have noted that there is a widespread positive attitude among Afghans towards the upcoming elections, but many others in the country haven't forgotten the past and are understandably skeptical. The Taliban are trying to exploit that skepsis in their propaganda, which portrays the elections as manipulated by the West.

According to Wörmer, the West has taken a neutral stance in the election campaign. "I'm sure there would be problems if someone whom Human Rights Watch had designated a war criminal, were to become president."

Ruttig also sees the withdrawal of the president's brother as a positive step. "The move prevents conveying the impression that Afghanistan will be ruled by a political dynasty, as is so often the case in South Asian states." He sees the participation of the Afghan population in the current political debate as a positive development.

The Taliban has urged its fighters to target polling staff, voters and security forces in Afghanistan's April 5 elections. Monday's statement is the Taliban's first formal threat of violence over the upcoming vote. (10.03.2014)

The Taliban attack on a military base on the border to Pakistan raises some questions. How could the attackers surprise the Afghan soldiers and why wasn't there any NATO air support? (26.02.2014)

Pakistanis say 'no' to the Taliban

Hundreds of thousands of people in the southern Pakistani city of Karachi have participated in the country's biggest anti-Taliban rally, demanding the government take serious action against the Islamists. (24.02.2014)

The Afghan government has been seeking talks with the Taliban to come to a so-called 'political solution.' But the Taliban have denied taking part in any negotiations. Observers say it is due to pressure from Pakistan. (20.02.2014)

After the withdrawal of Soviet troops 25 years ago, Afghanistan plunged into a civil war causing further destruction. Many wonder how it would be this time round after NATO troops leave the country by the end of 2014. (14.02.2014)

Afghan analyst Miagul Wasiq agrees. "The Afghan people know what's at stake because there is the imminent withdrawal of international troops and a potential reduction of financial aid," he told DW.

Meanwhile, the Taliban have interfered in the electoral campaign in their own way. On March 10, they issued a statement warning Afghans to stay away from the elections.

But political expert Miagul Wasiq sees another, potentially greater danger. "The success of the election depends on whether it is free and fair." Otherwise, says Wasiq, it wouldn't matter which of the three favorites comes out on top.