The Taliban has urged its fighters to target polling staff, voters and security forces in Afghanistan's April 5 elections. Monday's statement is the Taliban's first formal threat of violence over the upcoming vote. 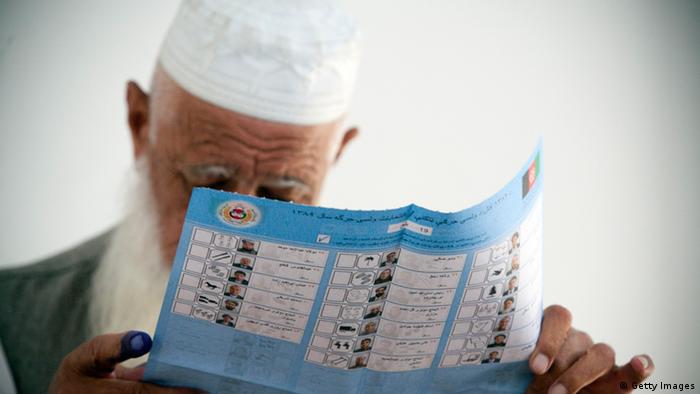 In a statement emailed to media outlets on Monday, Taliban Spokesman Zabihullah Mujahid urged Afghans not to take part in the April 5 presidential elections, which will serve to elect a successor to current President Hamid Karzai.

Mujahid urges clerics to spread the word that the upcoming vote was "an American conspiracy."

The statement, which is the group's first formal threat of violence pertaining to the election, tells Afghans to "reject [it] completely." Mujahid did not specify what kinds of attacks the Taliban has planned, but he urged fighters to target polling staff, voters and security forces.

"We have given orders to all our mujahideen to use all force at their disposal to disrupt these upcoming sham elections - to target all workers, activists, callers, security apparatus and offices," the statement reads. Mujahid called it the "religious obligation" of every Afghan to disrupt the elections.

Previous elections have been marred by Taliban violence - in 2009, militants assaulted and killed election workers, targeted candidates and attacked voters, sometimes even cutting off their fingers. Fifty-seven people died in the violence that year.

In this year's vote, Abdullah Abdullah, who came second in 2009, former foreign minister Zalmai Rassoul and former World Bank economist Ashraf Ghani are among the front-runners to succeed Karzai.

The new president will have to usher in a new era, as the Afghan army and police fight extremists without NATO combat assistance. All remaining 55,000 NATO combat troops will leave Afghanistan by December, but a small US force may be deployed from 2015 on counter-terrorism and training operations,if the next president signs a security deal with Washington.