Fifty years on, is the new Heino suddenly cool?

He’s best known for his extensive repertoire of sentimental oom-pah-pah Schlager hits about mountain landscapes and delicate Swiss maidens. So what has made 74-year-old Heino start covering Rammstein and Die Ärzte? 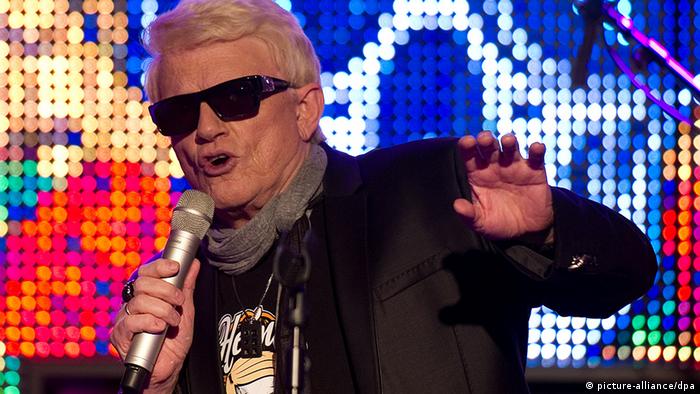 In the German-speaking world, he's an absolute phenomenon. His deep bass singing voice is just as distinctive as his shock of blonde hair and trademark sunglasses (worn, incidentally, to disguise an eye condition called exophthalmos). His shades are so much a part of his public image that he was even allowed to wear them in the photograph on his government-issued identification card.

Since he started out in the music business in mid-1960s, Heino carved a niche for himself singing folksy Schlager music. It's a formula that’s proven very successful; he's sold around 50 million albums since his 1967 debut as a solo artist and currently holds a 99% recognition factor - making him among the most recognizable celebrities in Germany.

In a recent interview with youth culture publication "Vice," Heino even suggested that he alone popularized the wealth of Schlager programs common on German television throughout the 1960s and 70s. 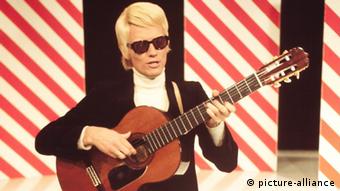 It's simple: if you're German, you know him

Some signs suggest the opposite. "Mit freundlichen Grüßen" has already racked up an impressive number of legal downloads since its February 1 release. But that's not to say the disc has been without controversy, with the most vocal detractors thus far being the artists themselves whose songs Heino chose to cover.

Dero, lead singer of the band Oomph!, whose number one single "Augen auf" (Open your Eyes) received the Heino treatment, was less than enthusiastic in an interview with the German tabloid newspaper "Bild," saying, "We are going to be taking a close look at Heino's version of our song to make sure he’s stayed within the author's copyright protection guidelines. He has a few songs in his repertoire which seem to glamorize racist ideas. Especially this romantic image of the honest soldier in songs like 'Es steht ein Soldat am Wolgastrand' (There Stands a Soldier on the Banks of the Volga) is absolutely nothing I want to hear."

Also less than impressed are Die Ärzte. Their song "Junge" (Boy) also appears on Heino's new album. "So long as this twerp doesn’t wantonly change the song, then I can't do anything about it," said their manager, Axel Schulz. Though the band can more or less live with a cover version, it seems that a video is quite another matter. They already threatened to bring a lawsuit for compensation against the singer if he made a promo of the track.

Singer Marius Müller-Westernhagen was more tolerant: "It's a free country," was all he had to say when questioned about Heino's cover of his track "Willenlos" (Submissive).

Heino's career choices have often raised eyebrows since he first took the stage in 1965. Singing with a typically Teutonic rolled "R" and sporting blonde hair earned Heino some popularity among conservative Germans, including within the extreme right scene. Those were hardly the right associations to have when the singer went on to perform for white farmers in South Africa during the days of apartheid. 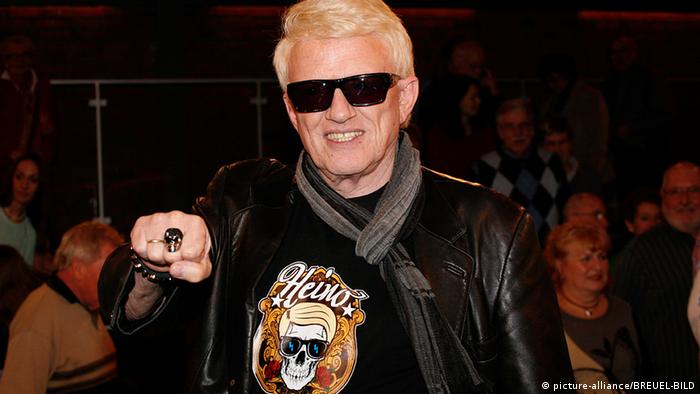 That move paled in comparison with the scandal caused in the 1970s when Heino was commissioned by the then minister president of Baden-Württemberg, Walter Scheel, to record a version of the national anthem to be played to pupils in school. That may seem innocuous on the surface, but Heino elected to sing all three verses of the "Deutschlandlied," a decision approved by Scheel. Since German Reunification in 1990, the national anthem has consisted solely of the much less nationalistic third and final stanza. The furor provoked by Heino's recording led many to suggest he had right-wing sympathies, and it wouldn't be the last time.

Those accusations haven't stopped Heino from a successful career, though. A good example of his status in Germany came in 1980, the year in which former Beatle John Lennon was assassinated. That year both Heino and Lennon released new albums; Heino's "Lieder der Berge" (Songs of the Mountains) shifted a staggering 1.2 million units, while Lennons's final LP, "Double Fantasy," a massive sensation on most charts, sold sluggishly in Germany with sales of around 200,000.

Realizing that he could improve his chances with younger audiences by employing some self-irony, 1989 brought tongue-in-cheek rap versions of some of Heino's best-known songs. Later, in 2005, Heino seemed ready to call it a day, even performing the obligatory farewell tour. But clearly the novelty of putting his feet up in the village of Bad Münstereifel's Café Heino and enjoying retirement quickly wore off. The singer began making plans for his comeback album.

"The idea had been brewing for quite some time," he explained in an interview with the German daily "Süddeutsche Zeitung."

"About a year and a half ago, I appeared at a concert in Schalke, a kind of modern Schlager festival I'd call it. I was on stage in front of around 35,000 people, and suddenly they all started chanting, 'Everyone except Heino can go home!' I mean, how can you ignore something like that? I thought: I have to do something for the fans," Heino continued.

Now the performer is trying his hand at being a rocker. "My Heino is really cool now!" exclaimed his wife and manager, Hannelore, who is responsible for her husband’s updated image.

"I bought him skinny jeans, new shoes and a studded leather jacket. He also wears a skull ring with rhinestones," she gushed in an interview with the tabloid "Bild." But the rock 'n' roll changes are, it seems, purely cosmetic. "He still enjoys his glass of wine in the evenings but won't touch whisky or vodka, and, as for sex, he hasn’t become any wilder in that department," she concluded.

On stage at Wacken?

"For years, I’ve been the butt of jokes, but now I am showing young people just what you can do with their kind of music," said Heino. While some might find the suggestion laughable, commercial success has not eluded him in 2013; "Mit freundlichen Grüßen" sailed straight onto the German album charts at number one.

And it seems there's no stopping this new, rebooted Heino; an appearance at this year's Wacken Open Air, the world’s biggest heavy metal festival, may well be in the cards. Heino was invited to perform there on stage by metalcore band Callejon.

On stage in front of 75,000 head-banging metalheads? It's hard to imagine the 74-year-old could have seen that coming.

New Zealand-born musician Hayden Chisholm toured Germany to learn about its rich folk music tradition - and why the Germans have a problem with it. His back-to-the-roots journey was captured in a new documentary. (11.10.2012)

Rap in the beergarden

Young crowds once had their hip-hop; elders had their German folk music show 'Musikantenstadl.' Now, the accordion's burning down the house as bands like Kellerkommando revolutionize folk music. (28.11.2012)

To some, it's the quintessence of Europe's various musical cultures. To others, it's a colossal celebration of bad taste. In its 56th year, the ESC shows once again why it invites heated debate. (06.05.2011)