Kwesi Nyantakyi, Ghana's football president and member of FIFA's decision-making council, has been suspended for 90 days. He was caught on camera allegedly requesting $11 million to secure government contracts. 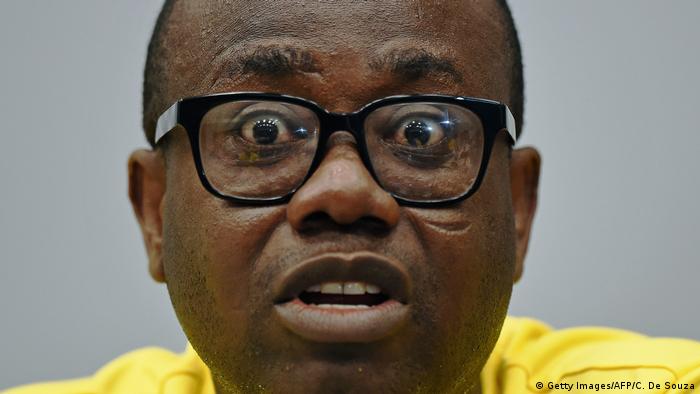 The suspension comes a day after the Ghanaian government has decided to dissolve the country's football association after claims, in an undercover documentary, of bribe-taking by referees and kickbacks to top officials.

Nyantakyi (pictured above) was caught on camera allegedly requesting $11 million from undercover reporters posing as investors to secure government contracts.

He also apparently tried to profit personally from a $5 million-a-year, five-year sponsorship deal with the GFA in what the expose said was a "clear breach" of ethics.

The revelations, filmed over two years by an investigative journalist and first revealed on Wednesday, have sent shock waves through Ghana, where football is the national sport.

Information minister Mustapha Abdul-Hamid said the government was "shocked and outraged" at the claims, which included referees apparently accepting bribes of at least $100 (€85) to throw matches.

The conduct of all GFA officials and the suspended director-general of the National Sports Authority, Robert Sarfo Mensah, was referred to police for further investigation and any "appropriate action," he added.

Provisional measures will be put in place to run the sport in Ghana until a new body is formed.

FIFA has not yet commented on whether it will take any action regarding the GFA's dissolution. The body does not accept any third party, including government, interference in football associations.

A new documentary from an acclaimed investigative journalist claims to show Ghana’s football boss, Kwesi Nyantakyi, and hundreds of local and international referees and officials taking cash bribes and gifts. (07.06.2018)

Rwanda has struck a sponsorship deal with English soccer club Arsenal for about €34.5 million — a deal that has rubbed many the wrong way since the country receives foreign aid. (31.05.2018)