A new permanent exhibition opened Friday at the former "Stasi Prison" in Bautzen, about a two-hour drive south of Berlin. A visit to the infamous place reveals a chamber of horrors. 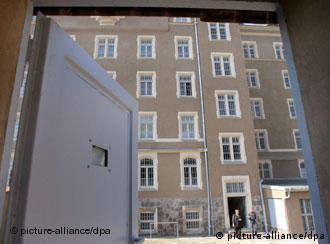 Located in a quiet tree-lined neighborhood of refurbished stately villas in Bautzen, the most notorious symbol of political oppression in communist East Germany seems almost harmless at first sight.

That impression disappears immediately upon entering the gray-walled prison, which has witnessed the excesses of the Nazi era, post-war Soviet occupation and most recently, the Stasi, East Germany’s secret police. It was under the Stasi in particular, that the prison gained infamy.

Throughout the long corridors and sparsely-furnished cells, a sense of oppression and fear still lingers in the bleak building simply known as the "Stasi Prison."

“This was practically the Stasi’s very own personal prison," said Susanne Hattig, a researcher at the prison which today serves as a memorial and documentation center. "They had direct access to the inmates and could basically do what they wanted.”

Beyond a series of metal gates and watch towers, the building opens on to a long corridor illuminated by florescent light. It is flanked by dozens of narrow, cold cells with barred and glazed windows and outfitted with hard beds and a wash basin. The air smells moldy and metallic and there are heavy bolts, thick double doors and peepholes everywhere. 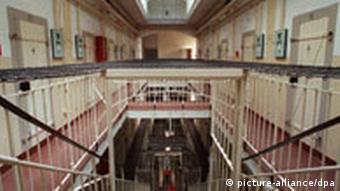 A glimpse of the "stairway to heaven"

An endless staircase leads up five stories to more corridors and dank cells. It was dubbed the “stairway to heaven” by former inmates because it led away from “hell,” the isolated ground floor wing in which torture and brutal interrogation sessions were conducted. The door leading there is stamped “Forbidden Zone” in big black letters.

Pointing to a metal door in the prison’s outer walls, Hattig said it led to an extra office of the Stasi.

“Stasi officers came in through that door and entered the prison whenever they pleased," said Hattig. "Not even the guards at the entrance were aware of their presence.”

Between 1956 and 1989, the Stasi held over 2,300 prisoners in the building. The majority were dissidents and political prisoners, among them prominent figures such as the philosopher Rudolph Baro and writers Walter Janka, Erich Loest and Walter Kempowski. Others included western spies and people who had helped organized escape bids or who had tried to flee the country themselves. From 1963, a special section housed female inmates.

The treatment of prisoners is a catalogue of horrors: torture, degradation, interrogation, deprivation, solitary confinement and obsessive monitoring.

“The methods were all very systematic -- every possible human and technical tool was used to break down people,” Hattig said.

"I was completely shattered"

Thomas Raufeisen knows that only too well. A former inmate, the story of Raufeisen's imprisonment is fairly typical of the time.

Raufeisen grew up in Hanover in West Germany and was 16 when he found out that his father spied for the Stasi and planned to switch sides. Worried that Raufeisen's father might reveal state secrets to western intelligence agencies, the Stasi ordered him to move to East Germany with his family.

"I just couldn't get used to East Germany. I didn't even try to integrate," said Raufeisen. "My father too was very disillusioned with the East German state and it killed him to see that he had made his family unhappy."

"Initially, my confinement in the prison seemed completely absurd to me. I had traveled throughout western Europe earlier and just couldn't fathom that I wasn't a free man anymore." 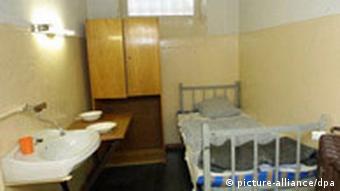 Raufeisen said the food was "very bad," and that he had to live in a tiny cell with four other inmates. "It was very cramped. The whole situation was scary because you didn't know what to expect each day."

After his three-year sentence was up, Raufeisen was released and was allowed to go back to Hanover in West Germany.

“Life was tough initially," he said. "I was completely shattered by my experience in the prison. Every normal act seemed terrifying -- for instance, I found it extremely difficult to even order a bun at the bakery.”

His mother too was released after her seven-year sentence, but Raufeisen's father died in 1987 during his imprisonment.

The experiences of former inmates are captured in video and audio footage as well as on signs in the 200 or so prison cells.

In addition, a permanent exhibition chronicling the suffering of inmates in the prison opened on Friday, Sept 8 at the Bautzen memorial center. 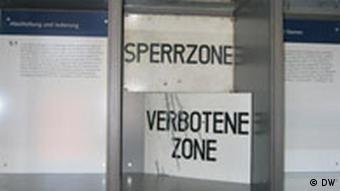 Signs saying "forbidden zone," which were found all over the prison, are part of the permanent exhibition

Exhibits include a prison register detailing names of the first inmates, a bug embedded in the woodwork of the visitor’s room in which prisoners met family and friends, a briefcase used to transport the piles of tapes containing recorded conversations of prisoners and newspaper articles in West German papers about prominent dissidents held at the prison.

The show is divided into sections detailing the phases that inmates were made to go through from the time of arrival to release -- the prisoners' freedom was often bought by West Germany.

Some articles also dwell on the absurdity of prison life. For instance, a small, red radio dating from the 1970s was smuggled in by a guard for a prisoner, Hossein Yazdi, in return for gifts from West Germany where Yazdi’s brother lived. Yazdi was thus able to break through the fog of censorship prevalent in the prison and listen to West German radio for ten months in his cell at night before it was discovered and the guard was fired.

“We spent years gathering the exhibits because the prison was emptied in a routine administrative move after the fall of the Berlin Wall,” said Hattig. “It was a catastrophe.”

“The terror was constant”

Most of the exhibits stem from former prisoners, many of whom are part of a committee that pushed to turn the place into a memorial center in 1994. The center works closely together with former inmates and conducts guided tours, in particular, for schools.

“It’s extremely important to document what happened there,” Raufeisen said. “It’s often forgotten today that the terror was not just something abstract, but rather very real and constant.”