The former guerrilla commander has been hospitalized for heart surgery, the group said. Timochenko was unlikely to do well in the election as many in Colombia believe he should be behind bars. 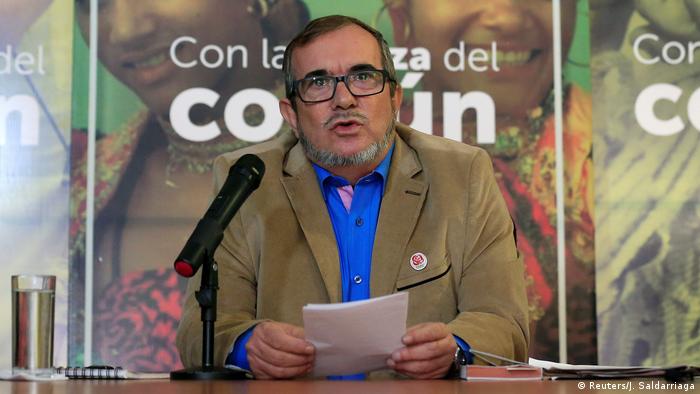 The political party formed by the ex-Colombian rebel FARC group has withdrawn its candidate from the country's presidential race, an official said Thursday. Their leader Rodrigo Londono, also known as Timochenko, had to undergo heart surgery, they said.

The group added that right-wing attacks on their campaign events also played a role in its decision.

"The surgery which took place yesterday, combined with already discussed features of the electoral campaign, has led us to decline our presidential aspirations," said FARC senate hopeful Ivan Marquez.

Legislative elections on Sunday and the presidential vote on May 27 will be the first since a historic deal between Bogota and FARC in 2016 brought an end to decades of violence that left some 177,000 civilians dead.

During his time as FARC chief from 2011 onward, Timochenko was accused by the US Department of State of using the production and sale of cocaine to finance the organization's operations and of murdering hundreds of people who got in the way of this process.

FARC uncomfortable in the mainstream

The former guerrillas have found it difficult to operate in the political mainstream, and have encountered streams of protests and some right-wing attacks on the campaign trail.

Despite this, FARC is fielding 74 candidates for the upper and lower houses of Congress. They are guaranteed 10 seats until 2026 under the peace accords but have said they hope to win more. Whether they manage remains to be seen, as many Colombiansbelieve the rebel leaders belong in jail, not in government.

Many have scoffed at the group's decision to keep its wartime acronym and field graying ex-commanders as legislative candidates rather than younger and less controversial members of the group. However, FARC could garner support from the rural areas in which it once operated far from the government's reach, areas that are still without good schools, roads and services.

FARC said it will choose a different person to support in the presidential election, as long as the candidate supports the truce. Incumbent Juan Manuel Santos, who won the Nobel Peace Prize in 2016 for his efforts in negotiating the peace treaty, has already served two terms and cannot run.

The leader of Colombia's FARC rebels has suffered a stroke, just days after a historic handover of weapons. The left-wing rebels signed a historic peace deal in November after four years of negotiations. (03.07.2017)