Far-Right Le Pen′s Slurs Fail to Upset France′s Quest For Glory | News and current affairs from Germany and around the world | DW | 29.06.2006

France coach Raymond Domenech has defended his players against comments from far-right politician Jean-Marie Le Pen who claimed that they lacked support from the fans back home. 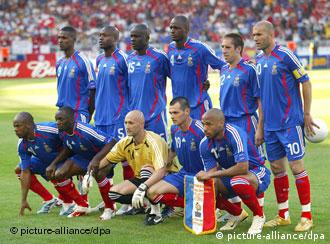 Multi-racial, multi-national, multi-talented: France's players are proud to be French

The anti-immigration National Front leader made his comments ahead of France's last 16 round game against Spain which the French went on to win 3-1 to reach the quarter-finals.

Presidential candidate Le Pen said that there was no great national movement of support behind what he called an ageing team. "I get the feeling that the French public do not feel truly represented by them which, without doubt, explains why there is not the same depth of support as there was eight years ago" when France won the World Cup at home.

Le Pen also indulged in an old charge that the French players did not properly sing the national anthem when it was played just prior to kickoff, citing the case of Zinedine Zidane "who mumbles it a bit."

Replying to the comments at the French training base in Germany, Domenech said that it was wrong to single out the French players for such criticism. "He should take a look at the other teams. We are probably one of the teams which have the most players that sing the national anthem." 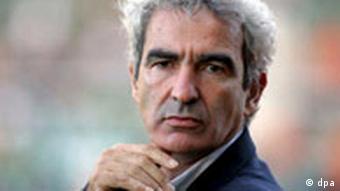 Domenech has come out to support his team 100 percent

"He should stop saying things like this, the Spanish don't sing, the Argentineans don't sing. The players are proud to wear the French colors."

Lilian Thuram, France's most capped player, also took issue with Le Pen, saying: "Vive La France, but not the France that Monsieur Le Pen wants. He wants to be President but he doesn't know his history of France."

"Maybe Mr. Le Pen hasn't been told that some French people are black and others have got blond or brown hair."

"The public support the France team, they don't ask what color the players are, regardless of whether they're black or brown or white the team represents France. If you see him tell him we're proud to be French." 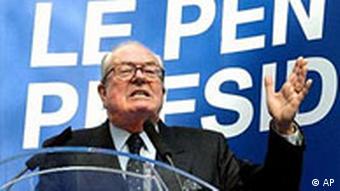 The France team is too black for racist Le Pen

Le Pen has regularly been at loggerheads with the French national side which draws its players from a mixed background of European and African descent.

"He says there are too many black players on the team, well I don't know how to respond to that as I'm not black," Thuram, born in Guadeloupe, teased.

The defender's comments sparked a spontaneous round of applause from the 100 or so journalists and photographers present.

Thuram also addressed Le Pen's comments that some players should be kicked out of the team for not singing the La Marseillaise. "Some sing the anthem and some don't but whether you sing it or not has nothing to do with whether you feel French or not," the defender said.

"Maybe we should invite Monsieur Le Pen to celebrate our next victory with us," Thuram said. "Maybe it would help him realize that we are all French."

Two human rights groups on Wednesday issued guidelines for visitors to Germany during the World Cup about how to avoid falling victim to racist violence and how to find help if they do. (June 7, 2006)

After racist chants in stadiums in Italy and Spain last weekend brought African players to tears, the European Union and soccer's governing body are planning to get tougher on soccer's major problem. (Dec. 1, 2005)