After racist chants in stadiums in Italy and Spain last weekend brought African players to tears, the European Union and soccer's governing body are planning to get tougher on soccer's major problem. 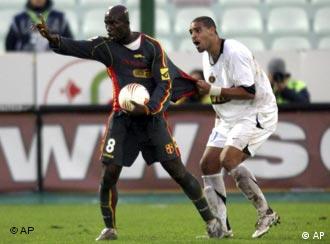 Inter's Adriano (r.) tries to keep Zoro from walking off in protest

On soccer pitches across Belgium this weekend, players will wear a black and white stripe on their faces. In Italy, an anti-racism banner will be unveiled before the opening whistle of every top Italian league and Italian Cup match.

The measures, organized by the Belgian and Italian leagues, follow another shameful weekend of racism in European soccer. On Sunday, Messina's Ivory Coast defender Marc Zoro threatened to walk off the field after fans of his team's opponents, Inter Milan, repeatedly hurled racial epithets at him. Two Espanyol of Barcelona players, the Cameroon goalkeeper Carlos Kameni and the Brazilian midfielder Fredson, were subjected to racist chants in Madrid by fans of opponent Atletico Madrid.

From fines to bans

Though hardly a new problem in the Spanish and Italian leagues, both European soccer's governing body as well as the European Parliament have promised to throw the book at violators and disperse the dark cloud hanging over European soccer.

"We are prepared to implement the necessary sanctions, from fines and closure of stadiums, and even to not allow teams to participate in competitions," said Per Ravn Omdal, the vice president of UEFA.

EU legislators are proposing a law that could stop games in which players are racially abused as well as punish the guilty clubs and national federations. Persistent offenders will be permanently removed from competition, should the new law go through. If more than half of the EU parliament signs the declaration, it will become a resolution with the possibility of becoming law.

Italy's anti-racism shirts have done little to stop the problem

The strong measures came about after the Zoro incident created headlines around the world. In the 66th minute of his team's match against Inter Milan, he picked up the ball, planning to hand it to the fourth referee official as he walked off the pitch. Inter Milan stars Adriano, a Brazilian, and Nigerian forward Obafemi Martins, intervened. They pleaded with their fans to stop and convinced Zoro, who was in tears, to continue playing.

Omdal would like to see referees take more initiative in suspending or stopping matches marred by racist chants or taunts.

"Referees will be given the necessary power to abandon or cancel matches if necessary," he said. "We need referees and match officials to be tough on this issue. If they have been asleep then they need to wake up."

World governing body FIFA fined the Spanish Football Association 100,000 Swiss francs ($87,340) after Spanish fans directed racist chants at black English players Thierry Henry and Shaun Wright-Phillips during a match between the two national teams in November 2004. The Spanish FA fined national team coach Luis Aragones 3,000 euros for racist remarks he made about Henry to his team, a figure that was slammed by anti-racism campaigners as far too low.

Serbian striker Nenad Jestrovic became the first player to be dismissed in a Champion's League match for alleged racist comments while his side, Anderlecht of Belgium, played against Liverpool earlier in the month. UEFA banned him for three matches.

German soccer hooligans have made a violent return to the international stage with just over a year to go before Germany hosts the 2006 World Cup. Officials have faith in security measures but experts predict trouble. (April 7, 2004)

The Ugly Side of the Beautiful Game

An explosion of racial abuse in European soccer over the past few weeks has seen the return of a problem once thought of as a relic of the game. But has it really ever been away? (Nov. 28, 2004)

Sixty years after the end of World War II, Germany's soccer federation (DFB) has presented a study of its role during the Nazi era. While DFB leaders weren't ardent Hitler supporters, they played along as opportunists. (Sept. 15, 2005)

For all their fame and fortune, footballers are often used as pawns. The decision by Paris Saint-Germain and Basaksehir players to walk off together is a demonstration of a real power rarely used, says DW's Matt Pearson.

UEFA has refused to light the Allianz Arena in rainbow colors in support of LGBTQ rights, a decision Munich's mayor has labeled as "shameful." One Hungarian activist group said the action would have "meant the world."