Far-right Freedom Party most popular among young Austrians | Europe | News and current affairs from around the continent | DW | 20.11.2010

Austria's far-right Freedom Party has become the country's second-most popular party. The party, which campaigns on an anti-immigrant platform, even ranks first among voters under 30, a new poll found. 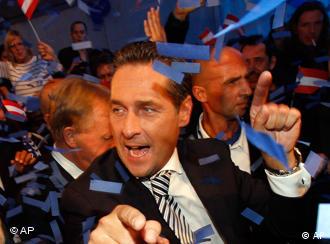 The launch of the Freedom Party's (FPO) campaign for the recent local elections in Vienna may seem bizarre but has proven to be successful.

Heinz-Christian Strache, the party's leader, stepped into the ring at a suburban shopping center, acting the part of a fighter who will take on all comers but especially left-wingers and Greens.

Strache's party went on to win second place in the Vienna election. And a recent national opinion poll says 27 percent would vote for him in a national election.

Austria currently has a so-called grand coalition government made up of the Social Democrats and the conservative People's Party. But their popularity is declining in the face of Freedom Party gains.

The same situation existed just over a decade ago when former leader Joerg Haider took the party into a coalition government. Before his death in a car accident, Haider campaigned on an anti-immigrant platform. And party leader Strache is tapping into the same rich vein of voters, according to political commentator Herbert Lackner. 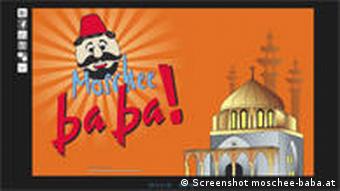 "If the government threw out all the people that came into Austria over the past 10 or 20 years, if they would throw them all out but one, the Freedom Party would still campaign against this one single person," Lackner told Deutsche Welle. "And a 100,000 people would still believe that there are too many foreigners."

One of the most surprising results from the latest survey is the Freedom Party's popularity among young Austrians. It's the number one choice for people under 30. Strache appeals most strongly to young males, as did his predecessor Haider.

Popularity based on austerity measures

Analysts point out that part of the recent surge by the far right is due to the coalition's austerity measures. Their cost-cutting budget is currently working its way through parliament.

Lackner believes Austrians will only vote for Heinz-Christian Strache in the next general election in three years if they are sure he won't become part of a government.

"If people see that Strache could come into the position to become part of a government I think that would scare many people off."

The far right has been making big gains in opinion polls in Vienna and could win close to a quarter of the votes in October's election. But many are concerned by the party's use of xenophobic slogans. (20.08.2010)

Austrian police have been tasked with tracking down asylum seekers accused of claiming benefits they’re not entitled to. The move has been criticized by human rights groups and contradicts government policy. (28.07.2010)

Right-wing 'housewife' wants to be Austria's next president

On Sunday, Austrians will go to the polls to choose a new president. The incumbent Social Democrat is favored to win, but a far-right candidate is causing controversy. (24.04.2010)