Fall armyworm is threatening half of Africa's corn harvest

Two years ago, the voracious caterpillar emerged in southern Africa. Since then, it has spread to 38 countries on the continent. The World Food and Agricultural Organization is warning of imminent crop failures. 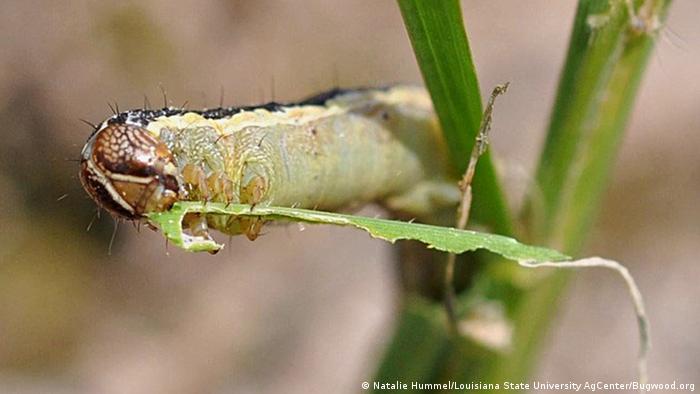 The fall armyworm (Spodoptera frugiperda) is likely to cause great damages to the harvest this year and in the coming years. That's what Jean-Baptiste Bahama, a representative of the UN Food and Agricultural Organization (FAO) in the Ethiopian capital Addis Ababa, told German news agency DPA. The caterpillar attacks primarily corn, which is the most important staple food in Africa.

The fall armyworm originates in the tropical and subtropical regions of America. In Africa, it first emerged in Nigeria in 2016. Since then it managed to spread to 38 African countries. In July of this year, the parasite has even been sighted on Cap Verde, a group of islands in the Atlantic off the western African coast.

South of the Sahara, the FAO expects crop failures amounting to losses in the billions for the coming years.

"The amount of damage is of great concern, especially in those countries where most farms are small and farmers have little access to effective pesticides," Bahama said.

Half of the crops could get destroyed

Each year, the caterpillars could destroy between eight and 21 million metric tons of corn, the FAO estimates. Usually the harvest reaches 39 million tons. Financially, that would amount to losses between 2.5 and 6.5 billion dollars for the farmers, Bahama estimates.

The fall armyworm eats his fill very quickly and then pupates. As a moth it can travel as far as 100 kilometers in just one night. The female lays hundreds of eggs at once.

The greatest danger involves swarms of moths tackling young corn plantings. Those have not yet developed any resiliance and can easily be completely destroyed. And the caterpillar does not only eat corn. It can also survive on another 80 plant species, including rice, tomatoes, soy, spinach, cotton, wheat, sugar cane, sorghum and millet.

Zimbabwe’s response to the outbreak of the fall armyworm has been hampered by farmer’s lack of information and pesticides to fight it. This has worsened the food insecurity situation as it targets staple crop-maize. (28.02.2017)