Fact check: Does criminalization prevent abortions? | World | Breaking news and perspectives from around the globe | DW | 01.07.2022

Abortion was the subject of debate long before the fundamental right to the procedure was overturned in the United States, of course. DW checks the facts on claims made by opponents and supporters of abortion rights. 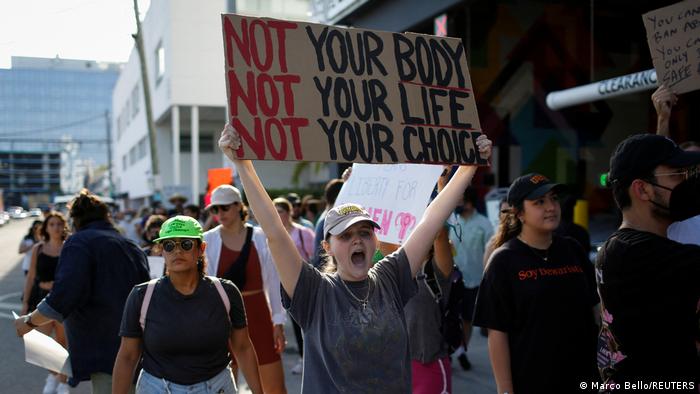 A large amount of misinformation has long circulated about abortion, researchers found in a study published in the American Journal of Public Health in 2021. The debate has grown more intense since the Supreme Court officially overturned five decades of legal precedent on abortion in the United States on June 24: Both opponents and supporters of reproductive rights are discussing the issue passionately — and sometimes using false arguments to make their case. We reviewed four claims from both sides of the abortion debate.

Claim: Many advocates of reproductive rights say bans do not prevent the procedure, but instead can lead to life-threatening abortions. "The abortion ban does not stop abortion," a TikTok user says (archived claim here). "It just stops safe abortions."

A British research team that analyzed data from 1990 to 2019 concluded that abortion rates in countries with abortion bans were about the same as in countries where abortion is allowed. According to these data, bans do not lead to a decline in abortions.

According to the World Health Organization (WHO), 45% of abortions worldwide are unsafe. The WHO defines this as abortions that, among other things, take place without counseling, are performed by unskilled people, or are performed incorrectly or unhygienically. In countries where abortion is illegal, the procedure generally poses an additional health risk.

Lack of safe and respectful abortion care and the stigma associated with the procedure in some places can jeopardize patients' physical and mental well-being throughout their lives. The WHO estimates that 4.7% to 13.2% of maternal deaths worldwide occur because of unsafe abortions. In developed regions, 30 out of every 100,000 patients statistically die because of unsafe abortions; in developing regions, the number is 220 per 100,000. It is estimated that, in 2012, 7 million patients in developing countries were treated in hospitals after experiencing complications from unsafe abortions.

Are there no "safe abortions"?

There are two types of abortion: medical (nonsurgical) and in-clinic (surgical). Medical abortion is a procedure in which two different medicines, namely "mifepristone" and "misoprostol," are used to terminate a pregnancy. In-clinic abortion involves an operation to remove the fetus.

According to the American College of Obstetricians and Gynecologists (ACOG), abortion is a common medical procedure, and the overwhelming weight of medical evidence conclusively demonstrates that this procedure is very safe. The organization points out that major complications from abortion are extremely rare, occurring in just 0.2% to 0.5% of instances across gestational ages and types of abortion methods.

Dr. Alicia Baier, from Doctors For Choice Germany, confirmed to DW in a written statement that the complications of medical abortion are extremely rare. She added that pills are being used more and more around the world and also help to reduce maternal mortality caused by unsafe abortions.

Abortion, Guns, Racism: Is the US still Liberty's poster child?

Helena Lüer, of Doctors Without Borders, told DW in an email that medical abortion is 95% effective and "extremely safe." "The risk of dying from a safe abortion is lower than from a shot of penicillin or a tooth extraction," Lüer wrote. Data from the US Centers for Disease Control and Prevention (CDC) also show that the death rate for patients in the United States from abortions is very low. From 2013 to 2018, it was statistically 0.41 out of every 100,000 patients who had an abortion.

Dr. Awa Naghipour, a co-founder of the nongovernmental organization Feministische Medizin (Feminist Medicine), told DW that certain risks are associated with medical and in-clinic abortions. The most common complications of medical abortions, she said, are prolonged bleeding, cramps and pain, headaches, nausea and dizziness. In-clinic (surgical) abortion could also damage the uterus or other internal organs. She said the risks were much higher in regions where abortion is banned or severely restricted. "The more open, accessible, medically supervised and standardized access to abortion is, the safer it becomes," Naghipour said.

US reacts to reversal of Roe v. Wade

For the poll, 1,004 adults were surveyed by telephone in early January about their attitudes toward abortion. According to the Christian NGO Knights of Columbus, which sponsored the survey, one of the main findings is that 71% of Americans are in favor of legal restrictions on abortion.

The 71% figure does not show that respondents favor extreme legal restrictions on abortion, but only that they favor some restrictions — and of very different kinds.

Other studies also provide different results. A recent National Public Radio (NPR) poll of 941 US adults, for example, found that 56% oppose the Supreme Court's ruling to no longer generally guarantee the right to abortion, 40% favor the decision, and 4% are unsure. Americans are polarized on the issue, and the claim that there is a broad majority against abortion can't be proved with factual evidence.

Will there be any help available for women who want an abortion?

Is the abortion rate already declining?

Claim: "Abortion rates in the US have been declining for decades already," a Twitter user writes(archived here). To support this claim, he posted statistics from the Guttmacher Institute, a research and policy NGO, showing that the abortion rate has been falling for nearly 40 years. In 1981, an average of 29.3 out of every 1,000 women between 15 and 44 would have had an abortion; in 2017, the figure was just 13.5 out of every 1,000.

Both the Guttmacher Institute and the Centers for Disease Control and Prevention publish figures on abortions in the United States. In doing so, they use different methods and thus conclude different figures. For example, CDC data often do not include numbers from all states. You can find more detail on the research methods here.

In fact, the most recently released figures from both institutes show that the number of abortions has increased slightly in recent years. The latest CDC report counted 629,898 abortions in 2019, up from 619,591 in 2018. Guttmacher has also released figures for 2020, with researchers counting 930,160 abortions in the United States — up from 916,460 the year before.

Post-Roe, just over half of US states are set to implement abortion bans. But pregnant people may still terminate — although this can be expensive, and they must be careful. The good news is that help is available.

Activists and doctors have successfully had abortion bans temporarily blocked in several US states. In Florida, the presiding judge said that the state ban violated a woman's right to privacy.