There's a new head on show at the Rheinisches Landesmuseum in Bonn. The remains of the "Lord of Morken" were found in excellent condition, allowing a full reconstruction for display at the museum of cultural history. 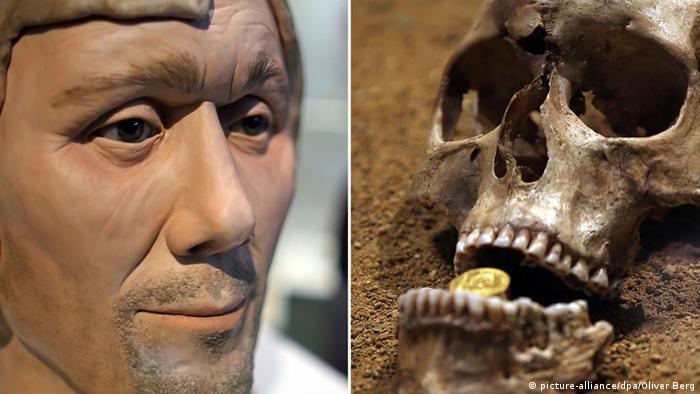 The face of the "Lord of Morken" was reconstructed in elaborate detail. Due to his well-preserved remaining skull bones and teeth, it was possible to build a replica which should most likely resemble his original appearance, Constanze Niess from the Frankfurt Institute of Forensic Medicine said on Wednesday.

The man's remains were discovered in 1955 in a Franconian burial ground in Morken, near Cologne. He had been interred around the year 600 AD in a royal burial chamber there. The precious goods within the grave, especially the materials used for his weapons, suggest that the man enjoyed a special status in the population, Elke Nieveler a specialist for the early Middle Ages at the Rheinisches Landesmuseum said.

The causes of the "Lord of Morken's" death at the age of 40 remain unclear. The serious head injury - probably a sword blow - which is clearly visible on his skull could not have been fatal because the wounds had time to heal well, explains Christian Meyer from Halle, who carried out the examinations of the remains.

The "Lord of Morken" is now the new attraction at the Rheinische Landesmuseum in Bonn. It offers unique insight into the cultural history of the Rhineland region. The world famous original Neanderthal (40,000 BC) is also on display there, as well as the world's largest Neolithic well.