Facial recognition software for pigs in China — ′I want to see the scientific evidence′ | Germany| News and in-depth reporting from Berlin and beyond | DW | 28.02.2019

If planet Earth had just five pigs, three would be in China. So the spread of a deadly swine disease there is especially worrying. Will facial recognition software help stop African swine fever? We have asked a vet.

DW: How is facial recognition technology being applied to pigs in China?

Dirk Pfeiffer: There are some big companies, like Alibaba and a couple of others, who have a lot of expertise with artificial intelligence. They're working on these technologies. They've got some farms where they're using them.

Is the software just identifying "Pig number123," or could it see that a pig's face appears sick or infected?

To actually determine whether an animal is sick takes a lot more steps. It's possible to monitor and then [see] if there's a change in behavior. So if the system has a record of the movements of the animal, and of the body temperature, etc., you might be able to identify whether it is more likely to be diseased, or infected, than other animals. But that's not specific to African swine fever. We do have such systems working for cattle, regarding pregnancy and when they're starting to calve.

Do the cattle systems also involve cameras and tracking software?

No, they use sensors. The animals are big enough to have transponders on them.

How many pigs are in China, and how many are affected by Swine fever?

About 60 percent of the world's pigs are kept in China [more than a billion]. If you were to combine France, Germany, Holland and I think even Spain – that's the size of the area where pigs are kept in the country.

You have a very high density of pigs in all that space. You go to Europe, and you have pockets of high density in parts of Spain, parts of Italy, and in Holland and Denmark and parts of Germany and Poland. But nothing of that density over huge geographical space, like in China.

We don't know how much of that population is actually affected by the virus. We can only hope that the reports we get of the outbreaks is a reasonable reflection of the iceberg of infection below it. 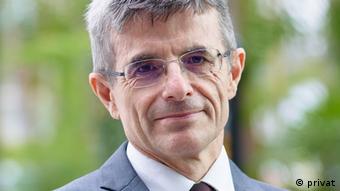 Dirk Pfeiffer is an expert in veterinary diseases and is a professor at City University of Hong Kong in the department of infectious diseases and public health.

If we can apply a tag to a pig's ear and identify the pig that way, what's the advantage in implementing facial recognition software?

The thing with tags is: They can lose them. And you have to handle the animals to actually attach them. So if you could use this software, this technology, and it's as accurate as a tag, it would clearly be an advantage.

And it's not just about the tag, it's all the information. Where has [the animal] been? How is it moving? What's its behavior? How often does it lie down? How much is it eating? That's what you want to know.

How close are we to attaining this goal with pigs? Five years? Ten years? Never?

Fairly close. With cattle, we're probably closer. Let me put it this way: With humans we seem to be rather close. There are obviously some others issues with privacy. But it shouldn't be too difficult to extend that to animals.

But while it's always great to come up with these ideas and innovation, we need to have objective studies where we're being shown that it doesn't get it wrong — that it actually consistently identifies that animal as whatever its identification is. And I haven't seen that so far for pigs. That requires a study. A scientific study.

Actually, there was a company in China that had something online where you could watch a chicken, and it gave you all the information about that chicken. You'd buy it during the growing process. And they said that they used artificial intelligence to uniquely identify the chickens.

And I would say again what I've said about the pigs — I want to see scientific evidence that this is reliable. I'm not saying it's impossible. Within five years' time it'll probably be as accurate as a tag. But I first want to see this looked at by a research project.

Dirk Pfeiffer of Germany obtained his PhD in New Zealand, worked at the Royal Veterinary College in London and is now based in Hong Kong. He has done field work in Kenya, Somalia, Malaysia and Thailand.