Heiko Maas wants Facebook to better enforce its community standards to rein in abusive users. Given the recent rise in anti-migrant and xenophobic posts, he has called for a meeting with Facebook's European managers. 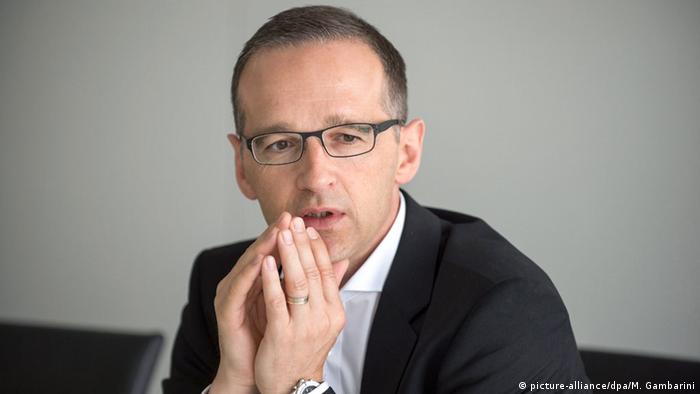 In the letter, which he sent to Facebook's European head office in Dublin as well as to its German subsidiary, he says the social media site's community standards needed to be more efficient and transparent.

In the wake of the recent openly xenophobic and hateful attacks on and protests at refugee camps in Germany, Maas said that the Justice Ministry had received many complaints about abusive content not being banned on Facebook.

Often, users get a message saying that the posts they reported did not violate Facebook's community standards without giving any further explanation "even in very obvious cases," according to Maas.

He says this standard response had become a "farce" and that users were struggling to understand why Facebook is quick to ban nudity, for example, referring to its community standards, but often fails to ban xenophobic and racist posts.

The implementation of its community standards, Maas says in his letter, "can apparently not be relied on, even though many posts contain comments that constitute the criminal offense of incitement to hatred."

He reminds Facebook that it is legally obliged to delete illegal posts.

Maas emphasizes that his demands do not go against freedom of speech. "But the Internet is not a lawless space where racist abuse and illegal posts can be allowed to flourish."

He stressed that there can be no "misunderstood tolerance," and that Facebook urgently needed to enforce its existing rules and assess whether further measures are needed.

In recent months, Germany has seen tens of thousands of refugees and migrants arrive at its borders, with many communities struggling to provide adequate care and shelter.

There have been persistent protests and attacks from far-right groups, often coordinated on sites such as Facebook. The attacks drew widespread criticism from polticians, with German Chancellor Angela Merkel calling the incidents "despicable and shameful."

In reponse to Maas' letter, a spokeswoman for Facebook said they were taking the justice minister's position seriously, but did not confirm that they would meet with him.

German head of state Joachim Gauck has praised volunteers for showing the positive face of Germany while on a visit to a refugee home in Berlin. It follows two xenophobic-related incidents the previous night. (26.08.2015)

Esther Bejarano, one of the last survivors of the Auschwitz concentration camp, is suing a Facebook user for making disparaging remarks. She says he mocked her by putting her in a class with Nazi officials. (21.08.2015)