Face-off between Zuma loyalists and critics at ANC headquarters

There were chaotic scenes outside Luthuli House, the African National Congress (ANC) headquarters in Johannesburg as Zuma loyalists tried to prevent critics of the president from entering their party headquarters. 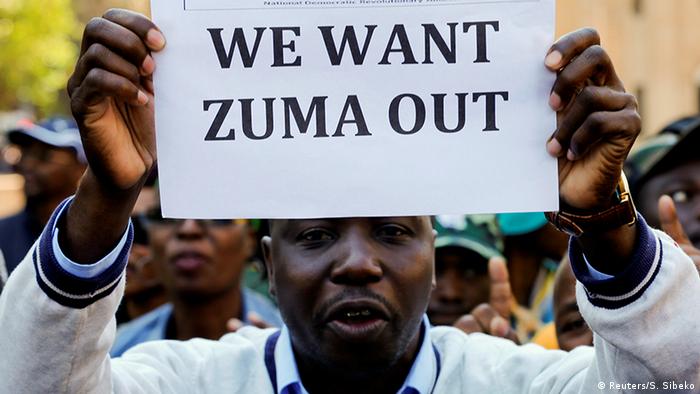 #OccupyLuthuliHouse was the social media slogan that critics of South African president Jacob Zuma used to rally people to their party headquarters in central Johannesburg. The group came to present the party leadership with a petition for Zuma's immediate resignation as both head of state and ANC president. At the ANC headquarters, the small group of less than 100 protesters was however met by the veterans of the ANC's former military wing Umkhonto we Sizwe, its youth wing and its womens' league who vowed to "defend" the party and its president.

The protests and the face-off outside the party headquarters in South Africa's biggest city show the deep divisions within the ANC. For the last year, President Zuma has been the center of a series of scandals ranging from the financing of upgrades of his private home in Nkandla, to his connections to the influential businessmen from the Gupta family. While criticism from both within and outside the ANC had grown, recent municipal elections showed just how far the ANC's popularity had dropped, as the party lost control of major urban centers including Johannesburg. 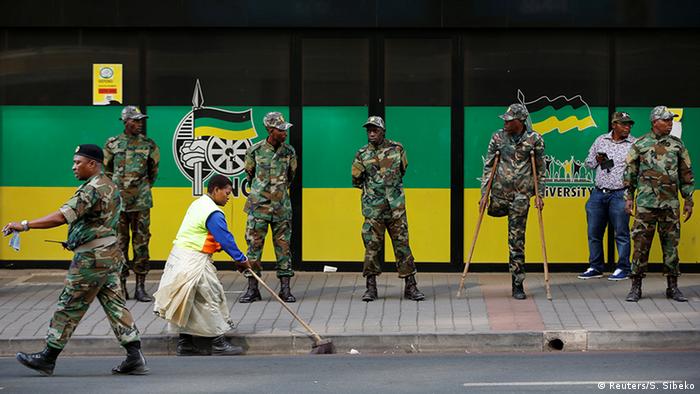 Dressed in camouflage, the party's military veterans vowed to protect ANC headquarters from the protesters

"We lost because of the corruption of Jacob Zuma," one frustrated ANC member told news agencies. "We need a leadership who doesn't promote corruption."

Sasoma Bungani, one of the "Occupy Luthuli House" organizers also noted that the protesters were there to show their disappointment over what he described as the ANC's internal war. "We have realized that those internal processes are not going to work for us, hence one of our demands is that the ANC's National Executive Committee, because it is failing to hold the President accountable and that has led to our demise in the elections, should all resign because they have failed to play their role."

Zuma loyalists on the other hand said that they would defend Zuma until his term came to an end. "Who's got the proof that Zuma is corrupt? He's my president until the end of his term," one Zuma loyalist said.

Kebby Maphotsoe, national chairperson of the ANC's military veterans association, argued that the veterans had fought for freedom and would not allow this freedom to be undermined, least of all unruly party members who he viewed as invaders of Luthuli House: "We want to call up the leadership here in Gauteng Province to take steps to really discipline these comrades because they are behaving in an undisciplined manner."

Dressed in military uniform the veterans only calmed down when ANC Secretary General Gwede Mantashe addressed the group. "You have done what you should do, defending your organisation, defending your headquarters that is good enough," Mantashe said. "Don't do something that will give them publicity."

Mantashe then proceeded to the protesters and received their memorandum. 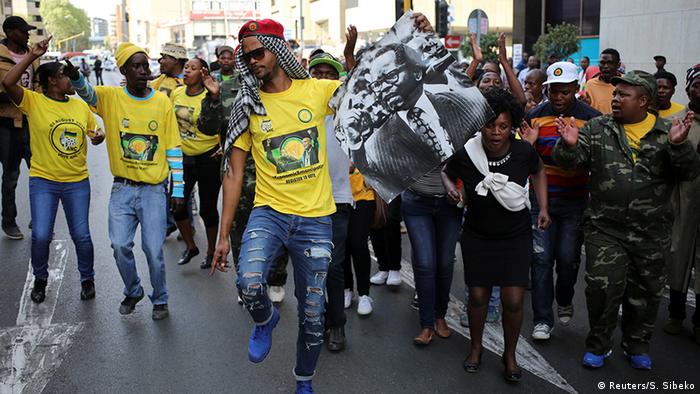 Who should take over?

Analyst and former ANC politician, Andrew Feinstein, sees the party's leadership struggle as the main force crippling the ANC at the moment. "The problem is that a lot of people within the ANC who are disgruntled with Zuma have actually left the organization," Feinstein told DW. "So the organization is shrinking in numbers, but the majority of members who have stayed within the organization have stayed loyal to Jacob Zuma." Gauteng Province, which encompasses the capital Pretoria and Johannesburg, is an exception, he explained, which is why the protest took place there.

Besides, Zuma's leadership qualities, Feinstein explained, there is of course a great deal of internal jostling over who could be the president's successor. Possible candidates could include Zuma's ex-wife and former chair of the African Union Commission, Nkosazana Dlamini-Zuma, and South Africa's deputy president and former unionist, Cyril Ramaphosa. It is however questionable whether either option would bring about a true reform within the party.

Subry Govender contributed to this report.

South Africa's Finance Minister Pravin Gordhan could be charged for graft this week according to media reports. The news comes as the powerful Gupta business clan say they are to disinvest from the country. (28.08.2016)

Financial markets are reacting negatively after the country’s finance minister was summoned by police. He is being called to answer questions about his previous role as the head of a spy unit under the tax office. (26.08.2016)

ANC has 'digressed and departed'

This month the ANC sustained heavy losses at local elections in South Africa. Ashley Ally is a South African entrepreneur and ANC member. Deeply disappointed with his party, he remains optimistic in the long term. (23.08.2016)