Lewis Hamilton survived constant pressure from Sebastian Vettel in Belgium to halve the gap at the head of the drivers' championship. Red Bull's Daniel Ricciardo finished third, but it was a bad day for Max Verstappen. 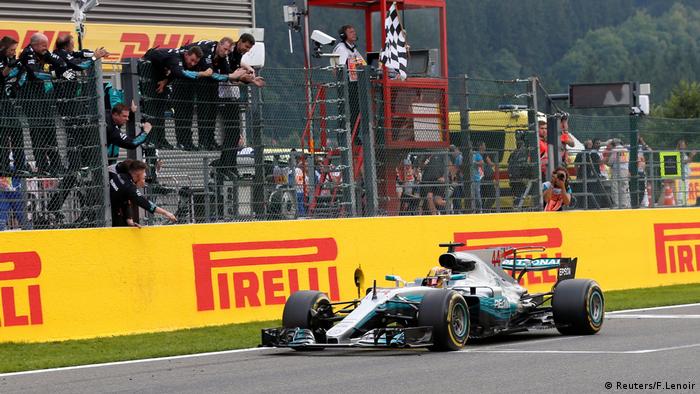 The Englishman crossed the line in Spa 2.3 seconds ahead of the German - his 58th GP win in his 200th F1 race - who remains seven points clear. Hamilton's fifth success in 12 races came a day after he equaled Michael Schumacher's all-time record of 68 pole positions.

On an entertaining afternoon, there was drama in the Force India camp as teammates Sergio Perez and Esteban Ocon collided. The resulting deployment of the safety allowed Vettel to almost wipe out Hamilton's lead, much to the frustration of the Briton.

There was disappointment for thousands of Dutch fans who had traveled to Belgium when Max Verstappen retired on the eighth lap after a loss of power - his sixth retirement of the season.

-- Re-live all the action from Spa as it happened --

44/44 -- Hamilton crosses the line 2.3 seconds ahead of Vettel to win the Belgian Grand Prix!

42/44 -- Mercedes encouraging their driver. "Leave it to me!" responds Hamilton. In control.

34/44 -- The green light is back on and Hamilton tries to hold off Vettel!

33/44 -- Safety car still out and Hamilton is complaining that he can't keep the temperature in his tires.

32/44 -- The safety car is still out but Hamilton insists that there is no debris left on the track. The Englishman is not happy.

31/44 -- Hamilton, Vettel and Bottas all take the opportunity to pit. Hamilton and Bottas take softs but Vettel goes to ultra-softs. Now it's getting interesting.

30/44 -- Drama between the Force Indias! Debris all over the track after Ocon and Perez collide. Safety car out.

27/44 -- Raikkonen faces a 28s gap to Ricciardo in fourth, but the Red Bull is still on super-softs and may pit again.

25/44 -- Raikkonen is now within DRS range of Hulkenberg for fifth.

22/44 -- We're half-way through and Mercedes are telling Hamilton to maintain his track position. "I'm trying to!" he responds. Vettel waiting to pounce but the gap is back up to 1.8 secs.

17/44 -- Vettel is closing the gap! He was 1.2s faster than Hamilton on the last lap and the gap is down to just 0.7s! The German has been flying since his pit stop.

14/44 -- Just a quick note - that last pit from Hamilton took just 2.3 secs! Professionalism in the extreme.

14/44 -- Red Bull tells Ricciardo that the degradation is looking good via radio ... he's falling away from Hamilton.

12/44 -- A first stop for Hulkenberg - just a quick switch to the soft compound.

10/44 -- Verstappen's sixth race retirement and you have to feel sorry for him. Glum faces all round. Tempers running high in the pits.

8/44 -- Max Verstappen is out! The Red Bull is out of power. Advice from the team doesn't work and the Dutchman is OUT.

6/44 -- There seem to be some unhappy drivers out on the track, with Magnussen complaining he has "no pace" and Alonso saying it is "embarrassing."

4/44 -- Wehrlein has retired after reporting a problem on his team radio. He said something had broken, but we couldn't quite hear what. He had started on soft tires. Up front, Hamilton leads from Vettel.

Lap 3/44 -- Alonso, the big mover, snaps up into seventh! The sly fox! Pascal Wehrlein is already out...

-- Off we go! Hamilton keeps his spot at the top, as does the rest of the top six.