The Kaiserring, or Goslar Award for Modern Art, is one of the most renowned art prizes in Germany. Tillmans, a former Turner Prize winner, is the 2018 recipient for his photography "between poetry and disillusionment."

Tillmans is one of the most important contemporary artists of his generation. Having held solo exhibitions in major museums around the world, including the London Tate Modern and the Beyeler Foundation museum in Basel, he is known above all for his large format photographs that famously depicted a generation's coming of age in the 1990s .

The jury awards the German artist the Goslar Award for his remarkably multi-layered life's work: "Analyzing the medium of photography, exploring its boundaries, and balancing poetry and disillusionment, make Wolfgang Tillmans one of the most important photographers of our time," the jury said.

Wolfgang Tillmans was born in 1968 in Remscheid, a small Rhineland town, and already as a teenager experimented with collages from magazines and other materials. After a period in Hamburg, where he worked as a photographer for local culture magazines, he moved to England and studied at the Bournemouth and Pool College of Art and Design from 1990 to 1992. 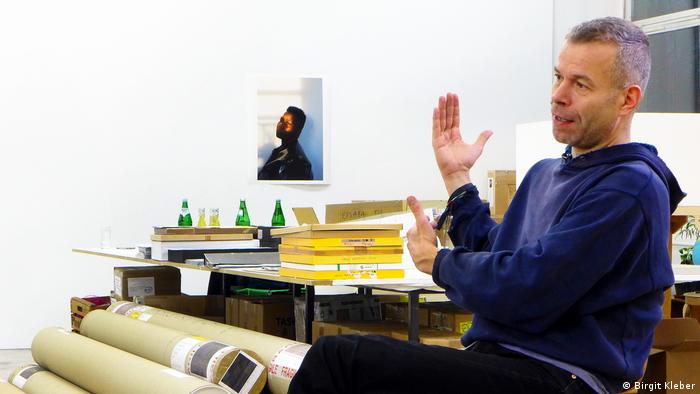 Wolfgang Tillmans in his London studio

Chronicler of his generation

With his camera, Tillmans set out to document 90s youth culture ranging from the techno clubs and the Love Parade to unique nudes of his mostly male friends that garnered him international renown.

He later produced photographic portraits of supermodels like Kate Moss, with his "Kate Moss with broccoli" iconically bridging the worlds of art and fashion.

In 2000 he was the first photographer and non-British artist to be awarded the Turner Prize, the UK's top art award.

In addition to his art, Tillmans is also a successful DJ, musician and music producer, releasing in 2016 his own album, titled Fragile. In 2006, while living in London, he founded the non-profit exhibition space "Between Bridges," which he reopened in 2014 in Berlin after returning to the city to live. He now divides his time between London and Berlin.

Wolfgang Tillmans has also been a member of the Berlin Academy of the Arts since 2012, and was inducted into the British Royal Academy of Arts in 2013. The 2018 recipient of the Goslar Award for Modern Art follows in the footsteps of international artists such as Isa Genzken, Olafur Eliasson, David Lynch and Andreas Gursky.

How artists and cultural institutions reacted to the German election

Most of the country's artists and cultural institutions voiced their position on election day, inciting people to go out and vote. Surveys had already predicted the strong results obtained by the far-right AfD party. (24.09.2017)

Campaigns across Germany aim to prevent a political shift to the right by courting young voters. The country’s youth - when they do vote - are not shying from populist politics. (22.09.2017)

Wolfgang Tillmans: 'Between poetry and disillusionment'

Lately focused on Brexit, the refugee crisis and AfD's rise, the art of Wolgang Tillmans is being honored with the 2018 Goslar Award and features in a major New Yorker profile. A look back on his 2017 Tate London show. (25.09.2018)