The lashing of a teenage girl in Afghanistan for having an "illegal relationship" has caused an uproar inside and outside the country. Experts fear a "Talibanization" of the Afghan justice system. 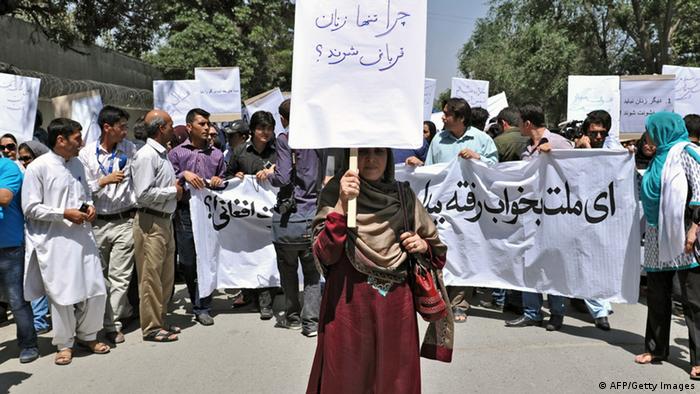 On September 16, three mullahs in the southern Afghan province of Ghazni sentenced 16-year-old Sabera to 100 lashes for having an "illegal relationship" with a boy. On Monday, September 24, hundreds of students and rights activists took to the streets to protest so-called "desert trials" such as the one which tried Sabera, which take place without due process of law and are held by the Taliban and local clerics.

The protesters demanded the government take measures to stop such unlawful trials and punishment. A day later, Afghan authorities reported the arrest of five people connected to Sabera's lashing. Authorities said they were investigating the case.

Sabera's sister Shafiqa was among the demonstrators. She had watched the sentence being carried out. 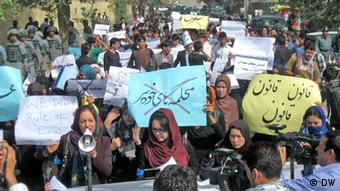 Hundreds of protesters took to the streets to demand justice

"At first, no one had the courage to carry out the lashings," she told Deutsche Welle. "When a local police chief said he would take responsibility, that's when one of his officials went forward and carried out the order."

Shafiqa said she tried to get the legal authorities involved in her case but that they had not been cooperative. "Basically they said, 'what do you expect if you want justice?'"

Parastu Yari, one of the demonstrators in Kabul, said the justice system should get involved in such cases. "We want the organizers of arbitrary trials to be brought before a court of law. The government must become active and prohibit these kinds of acts."

Shahgul Rezai, an MP from Ghazni province, where the trial took place, joined the protesters in Kabul to show her solidarity with the teenage girl. She also agreed to commission a parliamentary delegation to investigate Sabera's case.

Amnesty International welcomed the decision of the Afghan parliament to investigate the incident. At the same time, the rights organization criticized the country's government and its legal authorities for not taking any action in such cases in the past. The impunity for violence against women was widespread in Afghanistan, Huria Musadiq of Amnesty International told DW - despite the fact that the Afghan constitution guaranteed equal rights to men and women. In reality, she said, women faced much discrimination. 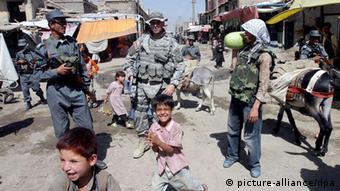 Afghanistan's justice system has much room for improvement

Referring to a 2011 report by the UN Mission in Afghanistan, Musadiq said very few judges and prosecutors in Afghanistan even had any knowledge of equal rights laws: "The discrimination of women starts in families and goes all the way to the justice system and to the top leaders of government."

Preparing for the worst?

For many, it was quite a surprise that Sabera was subjected to this form of parallel justice in an area like Jaghori District, where the Taliban is not active and has no followers, and which is generally seen as forward-thinking. The government, for the most part, has control over security and administration in the region.

Afghan expert Musadiq fears the incident could be an indication of a "re-Talibanization" of Afghan justice.

"We are observing a self-imposed censorship and the withdrawal of women from the public sphere," he told DW. "An incident like the one in Jaghori could be an indication that the people there fear the return of the Taliban and are simply preparing themselves by demonstrating that they follow shariah law."

Bad harvests, like the one this year, leave Afghanistan's small opium farmers with few options to pay back landowners. In desperation, some growers have reportedly committed suicide. (30.05.2012)

A young woman in Afghanistan was publicly executed for allegedly committing adultery. The Taliban welcomed the shooting, but due to a wave of outrage, have refused to accept responsibility. (09.07.2012)