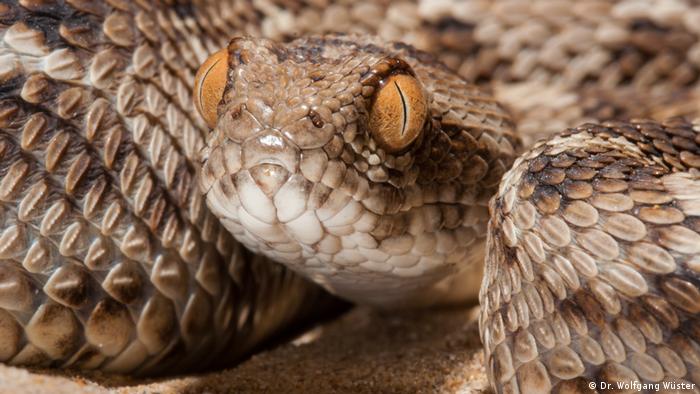 British scientists have found that an existing drug can significantly improve the chances of survival after snake bites. It has already worked in animal experiments.

The active substance that the research team from Liverpool wants to use against snake bites is called dimercaprol. So far, it, or the related 2,3-Dimercapto-1-propanesulfonic acid (DPMS), have been used mainly after heavy metal poisoning with arsenic, mercury or lead, for example.

Now, new research shows the two active ingredients also help to protect against snake venom. This was the idea of the biochemist and molecular biologist Laura Oana-Albulescu from the Liverpool School of Tropical Medicine (LSTM). She and her team had been looking for active ingredients that would bind to metal ions that act in the body together with snake venom.

Dimercaprol and DPMS work against enzymes in snake venom that rely on zinc ions to exert their devastating effects. The drugs do this by binding the zinc ions. The researchers were first able to show this in the laboratory. They published their results in the journal Science Translational Medicine on May 6, 2020.

They also succeeded in proving in animal experiments that DPMS could protect against the deadly effect of the poison of the saw-scaled viper.  One of the most widespread poisonous snakes, it lives in Africa, the Middle East and Asia and is responsible for a large proportion of fatal snake bites. About 138,000 people die each year worldwide from snakebites, according to the LSTM, and 400,000 people suffer irreparable damage to their health.

Most importantly, the physicians were also able to show that the drug worked when administered orally. Until now, dimercaprol has been injected mainly as an oily solution based on peanut oil.

As it can also be taken as a tablet, it would be an excellent first aid after snakebites if patients could not be quickly admitted to hospital.

Liverpool doctors believe that DPMS could bridge the time between being bitten and professional help arriving, especially before the administration of an antiserum. It will not be a substitute, but could save lives, especially in countries where it can take many hours for a patient to receive a serum.

Tropical disease biology professor Nicolas Casewell of LSTM, who focuses on snakebites, emphasized that one of the major advantages of DMPS is that it is already approved as a drug.

"The advantages of using a compound like DMPS is that it is already a licensed medicine that has been proven to be safe and affordable. That it can effectively neutralise saw-scaled viper venoms in models of envenoming highlights the promise of this drug as an early, pre-hospital, therapeutic intervention for life-threatening bites by snakes like the saw-scaled viper," he said.

The World Health Organization (WHO)  classifies snakebites as a priority health threat and has set itself the goal of halving the number of deaths and serious injuries by 2030. This is to be achieved on the one hand by research into new drugs, and on the other hand by building better local health facilities that can help those affected more quickly.