After successfully claiming compensation after being overcharged by Anderlecht last season, hardcore Bayern Munich supporters now claim that AEK Athens are also in breach of UEFA regulations on ticket pricing. 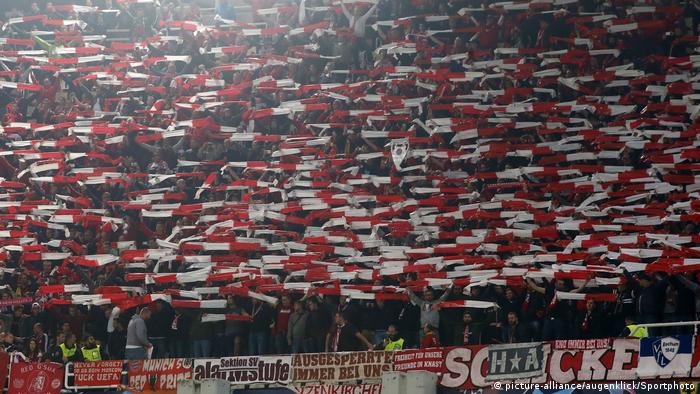 Bayern Munich supporters are demanding that UEFA open disciplinary proceedings against Greek champions AEK Athens after claiming once again that they were overcharged at a Champions League away match.

At Bayern's Champions League group stage game in the Greek capital last month, visiting supporters in blocks 20 and 22 of the Olympic Stadium were charged €35 ($40).

But according to research conducted by Bayern supporters and shared with DW, fans in equivalent sections in the home end were only charged €15.

What's more, some home fans in the sections directly beneath the away end, and therefore closer to the pitch, were even charged as little as €10, while seats directly on the halfway line with a far superior view of the pitch cost only €25. 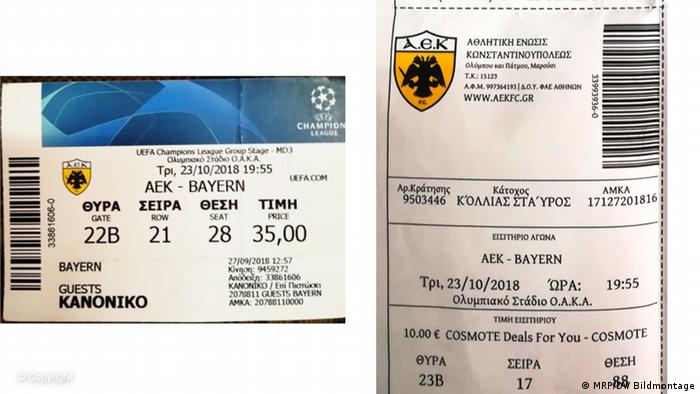 Bayern fans in inferior, upper-tier seats in Athens paid more (left) than home fans (right). Prices in directly comparable blocks in the home end were also cheaper than the away end, in a possible breach of UEFA regulations.

Should UEFA find this pricing structure to be correct, the Greek club could be in breach of Article 19 of European football's governing body's Safety and Security Regulations which states that "the price of tickets for supporters of the visiting team must not exceed the price paid for tickets of a comparable category that are sold to supporters of the home team."

In response to DW, UEFA said they have "opened an investigation (referring to article 19 of the UEFA Safety and Security regulations) in order to evaluate whether there are sufficient grounds to open disciplinary proceedings."

"UEFA's own regulations state that away fans cannot be charged more than home fans in comparable price categories," said fan group Munich's Red Pride (MRP), who have made their displeasure at ticket pricing known via banners at home and away games which have been visible on television.

"But this rule was circumvented for the umpteenth time in Athens. Money back now!"

This is not the first time that Bayern Munich supporters have complained about ticket prices when following their team away in Europe.

Earlier this year, UEFA ordered Anderlecht to repay €30 to each visiting Bayern fan in the upper tier after finding that the Belgian side had breached Article 19 by charging €100 for tickets in the away end – a cost which was also initially subsidized by Bayern Munich themselves to the tune of €30 per ticket. Ultimately, all Bayern fans, in both tiers, received €25.

In a similar situation, English side Manchester United also subsidized tickets after supporters were initially charged €100 for their Champions League last-16 away fixture against Sevilla. In that case, after the Spanish side refused to negotiate, United funded the subsidy by increasing the price of tickets for visiting fans at the return leg in Manchester. 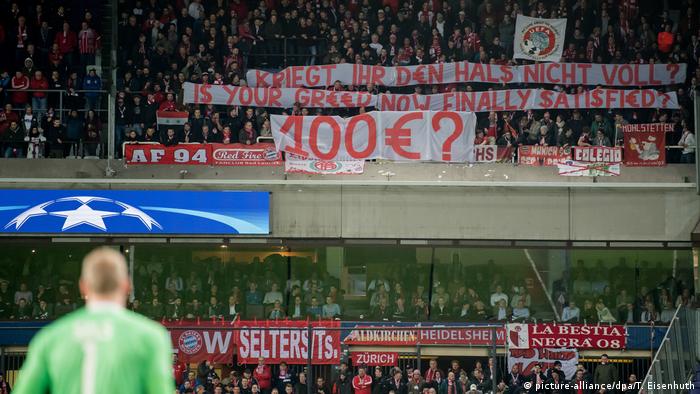 Bayern Munich have also been guilty of overcharging away supporters at the Allianz Arena, and the Bayern fans have been equally critically of their own club.

"After all the drives for reform of European competition to bring in millions, Bayern Munich surely don't need to charge away fans €50 in the group stages when the cheapest tickets in the home end only cost €30?" said Bayern supporter Franz W., a season ticket holder in the Allianz Arena's Südkurve.

"Whether in terms of club licensing or ticket prices, financial fair play only exists on paper."