Excessive Drinking Growing Problem in Germany | Germany| News and in-depth reporting from Berlin and beyond | DW | 13.11.2007

Germans lead Europe in alcohol consumption drinking on average 20 liters of alcohol per person each year. The drinking brings with it serious health risks and economic costs, according to a recent conference. 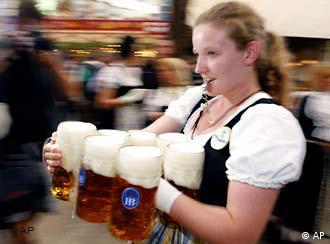 Don't be fooled by the rosy cheeks and twinkling eyes. Behind Germany's happy-go-lucky drinking culture are some sobering statistics.

On an average day, one in three Germans binge drink. It's this excessive alcohol intake that has pushed Germany to the top of the European Union in alcohol consumption. Per capita, Germany downs an average of 20 liters (5.3 gallons) of alcohol each year.

"Sadly, when it comes to alcohol consumption, Germany takes a leading position," said Jürgen Rehm, head of the Dresden Institute for Clinical Psychology and Psychotherapy. He was speaking Monday, Nov. 13, at the start of a conference in Mannheim bluntly titled Addiction 2007.

"These countries have exchanged the top spots in recent years," DHS spokeswoman Christa Merfert-Diete told the online version of the Focus newsmagazine.

Binge drinking not only for teenagers 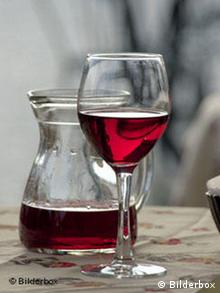 Between 2003 and 2006 the percentage of binge drinking among German adults increased 10 percent. A full 34 percent of adults binge drink daily, which means more than five glasses of alcohol in a short period of time, according to figures from the German Center for Addiction Issues (DHS).

"With binge drinking, one shouldn't point the finger at young people," said Walter Ferke of the DHS. "This is also about adult consumption."

A recent European study shows that across the continent, alcohol accounts for 7.8 percent of all sicknesses and early deaths.

Many costs of alcohol consumption 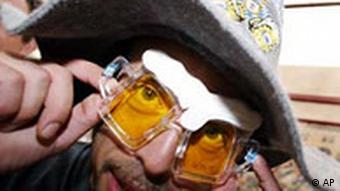 Seeing the world through beer-colored glasses

Statistics put the death toll among working-age adults from alcohol overconsumption at 23,000 yearly, 18,000 of them men. Three to four times as many people die from alcohol as in car crashes, statistics show.

Drinking a bottle of wine each day makes the risk of mouth or esophageal cancer 18 times higher than normal. Add to it cigarette smoking and the risk factor increases to 44 times above than average.

Germany should strive to reduce its alcohol consumption to between six and eight liters per person. If this level were reached, the negative health effects would be reduced about 20 percent, the DHS study said. 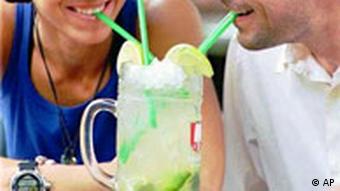 Rehm suggested implementing a tax that would be tied to the alcohol content of drinks. A higher price would decrease consumption, Rehm said. In Germany, alcohol is cheaper than anywhere else in Europe.

"We must make alcohol more expensive," Rehm said. "It's important for health reasons and also because it allows us to control costs to our health care system."

DHS blamed the alcohol lobby for downplaying the dangers associated with drinking alcohol. The group advocates a general advertising ban.

Germany's annual report on drugs and addiction was released showing a overall decrease in drug-related deaths, but alarming data on prescription drug addiction and youth drinking. (04.05.2007)

Germans will have to dig deeper in their pockets to enjoy their beloved beer as barley is increasingly displaced in the country's fields by heavily subsidized crops used for biofuels. (23.04.2007)

Do you think Germany has a drinking problem? Don't forget to include your name and country in your reply.