Georg Ratzinger, the older brother of former Pope Benedict XVI, established a "reign of fear" while leading the boys' choir in Regensburg, his successor claims. The Catholic choir has been hit by a massive abuse scandal. 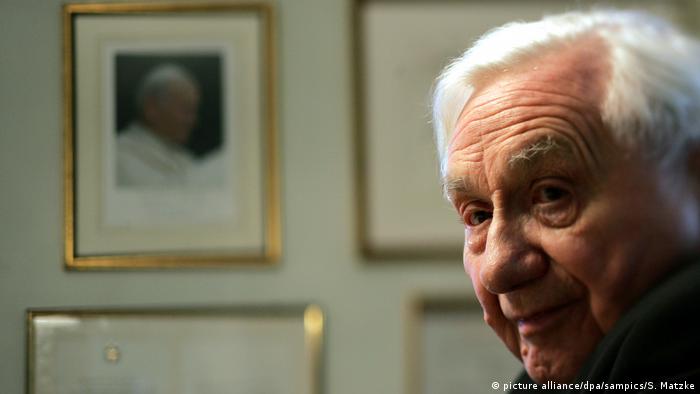 The latest findings into the decades of abuse in the Regensburg Domspatzen Catholic boys choir implicate 49 church members. Victims described their time in the choir as like "a prison, hell and a concentration camp." (18.07.2017)

Regensburg choir abuse victim: 'I have found my peace'

As a child in the famous Regensburg Domspatzen Catholic boys choir, Alexander Probst was one of hundreds of victims of physical and sexual abuse. Now, with the release of a final report on the abuse, he speaks with DW. (18.07.2017)

The Pope's post will be empty as of Friday, after Benedict XVI's retirement - his successor will be elected only in March. But the ex-pope himself won't have to worry about his pension. (28.02.2013)

The long-time choirmaster Ratzinger was "impulsive, even fanatical" when it came to imposing his idea of "musical quality," Ratzinger's successor and current Regensburg choirmaster Roland Büchner told Die Zeit weekly on Wednesday.

The now 93-year-old led the boys' choir between 1964 and 1994. During that time, "a reign of fear" was reportedly present among the pupils. Many of them were physically assaulted.

Ratzinger himself was reportedly "merciless" during rehearsals.

"After that, he could be the gentlest man in the world," according to Büchner, who took over the baton in 1994. "Some of the students saw him as a role model, others feared him as someone who could beat them."

Ratzinger is the older brother of the 90-year-old Joseph Aloisius Ratzinger, who served as Pope Benedict XVI between 2005 and 2013.

'Looked the other way'

The Regensburg choir re-entered the headlines earlier this week when investigator Ulrich Weber presented a 450-page report on abuse that allegedly spanned many decades. At least 547 young boys were abused by their priests and teachers, 67 of them suffered sexual assault, including rape.

The investigation focused on incidents from between 1945 and 1992. Ratzinger, who took over the choir in 1964 from Theobald Schrems, denies any knowledge of the sexual violence. He claimed that slapping pupils was normal at the time.

However, the lead investigator Weber said Ratzinger "looked the other way" and failed to act against the abuse "despite his knowledge." His report also blasts other Catholic Church figures, including Cardinal Gerhard Ludwig Müller, for failing to effectively confront the issue during his time as bishop in Regensburg.

It is unlikely the world can meet the goal of ending extreme poverty by 2030, a World Bank report found. Experts have said CCOVID-19 ended years of progress while war and higher prices are now making things worse.