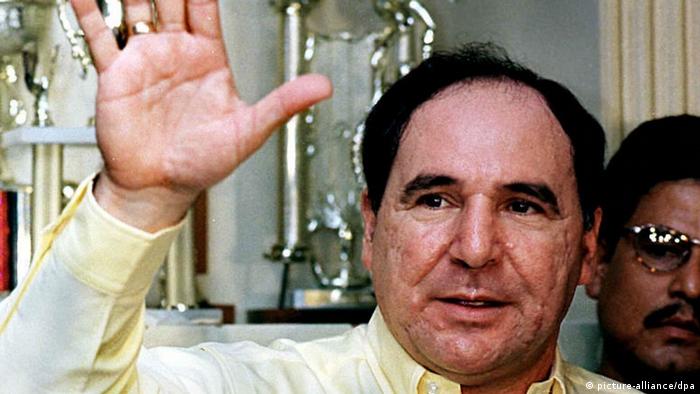 Former Ecuadorian president, Abdala Bucaram, was detained on Wednesday following a raid at his home as part of a corruption probe into the purchase of hospital supplies during the corona crisis.

Authorities have recovered nearly 5,000 masks and 2,000 coronavirus test kits, along with an unlicensed gun.

Though no charges have been filed, Bucaram was detained for possession of the gun.

"The ex-president Abdala B. was detained having been found to be in possession of a firearm, without presenting justification," the public prosecutor's office said on Twitter.

The search at Bucaram's home in Guayas province's Guayaquil, Ecuador's largest city and the epicenter of the COVID-19 outbreak in the country, was conducted in connection with an ongoing suspected embezzlement probe at a major public hospital.

Bucaram, 68, was removed from office in 1997 when the parliament deemed him mentally unfit in the midst of large-scale protests against his government. The populist leader was accused of corruption and nepotism during his stint in office. The parliament, however, did not have a medical justification for its ruling.

The country's public prosecutor is investigating a series of suspected corruption cases related to the acquisition of medical equipment during the pandemic. In one case, officials were charged $150 for body bags that should cost $15.

The residence of the prefect of Guayas province, Carlos Luis Morales, has also been searched as part of a probe into influence-peddling in the acquisition of hospital supplies.

Guayaquil's health system had collapsed when the pandemic in the country was at its peak in April. Bodies were piled up in the corridors and toilets of public hospitals.

Some bodies had also gone missing from the morgue.

Ecuador has reported a total of 3,500 deaths and 40,000 cases. The government suspects another 2,200 deaths from the coronavirus, on top of the official figures.

Nowhere is the commitment to environmental protection as dangerous as in Latin America. In a new report, the investigative data journalism project Tierra de Resistentes draws a shocking conclusion. (19.05.2020)

A group of Venezuelan refugees are making the grueling journey all the way to Peru, in part thanks to their lucky charm coconut, "Wilson." (13.04.2019)