The giant container ship finally arrived at its destination more than four months after being stuck for six days in the waterway that links Europe with Asia. 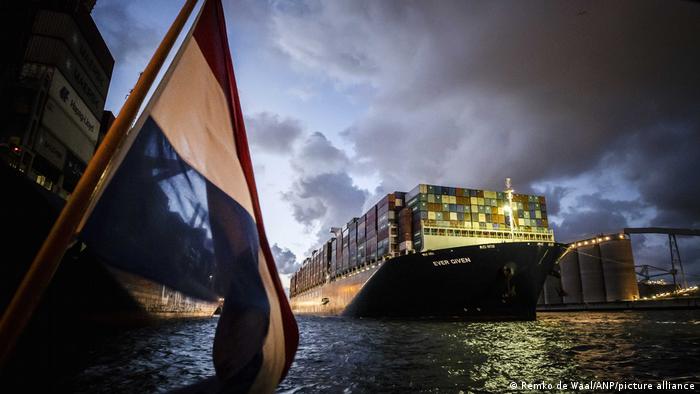 The Ever Given arrived in Rotterdam at around 5 a.m. local time

The Ever Given finally arrived in the Dutch port of Rotterdam on Thursday, some four months after the giant container ship was stuck for almost a week in the Suez Canal.

With the sun still to rise in Europe's largest seaport, the vessel was nonetheless welcomed by a small crowd. It had nothing like the attention bestowed upon it in the spring, however, when the world watched with bated breath for six days, as the ship remained wedged in the canal following a sandstorm on March 23.

"It was a great relief to see her and a special moment," the port's director of containers, Hans Nagtegaal, told the AFP news agency. "Finally we can get the job done offloading and hopefully get her back to a normal sailing routine."

Stuck in negotiations for 100 days

The 400-meter (1,312-foot) vessel resumed its voyage to Rotterdam on July 7 after a non-disclosure agreement was reached between the Suez Canal Authority (SCA) and the Ever Given's owners, Japanese firm Shoei Kisen Kaisha.

The SCA were keen to make up for lost revenues, salvage costs and damage to the canal.

The nearly 200,000-ton ship had been blocking a vital artery from Asia to Europe that carries 10% of global maritime trade, providing Egypt with vital revenues.

Egypt initially wanted $916 million (€772 million) in compensation before dropping that demand to around $550 million, but the final figure agreed upon remains undisclosed.

The Ever Given will stay in Rotterdam until Monday, before setting sail for Felixstowe, on the east coast of England. The ship will then go to into a dry dock in Dunkirk, France, for a further inspection.