Retiring European Commission President Jean-Claude Juncker has expressed regret for the lack of transparency in the process to nominate his successor. His own appointment had followed an election campaign, he noted. 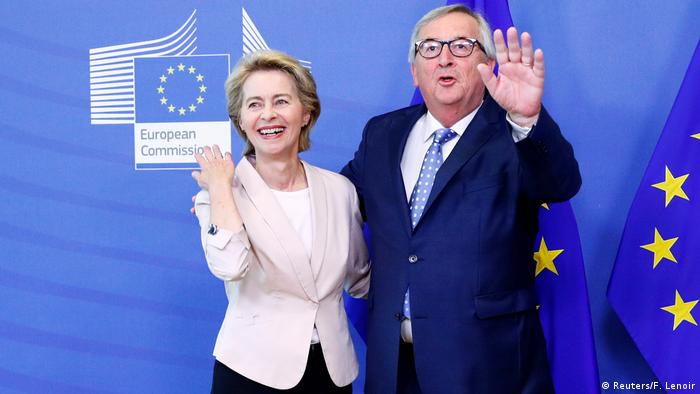 European Commission President Jean-Claude Juncker said the process that led to the nomination of Germany's Ursula von der Leyen had been an unwelcome departure from the practice of Spitzenkandidat (lead candidate).

Speaking in Helsinki on Friday, Juncker told a news conference: "The process was not very transparent."

Von der Leyen's nomination still requires approval from a majority in the European Parliament before she can take up her appointment in November.

His own appointment five years ago had been transparent as he had been chosen by leaders after running a campaign in European elections as a lead candidate in 2014: "I always had the impression that I would enter history but not like that. Because I am a very unique guy," Juncker quipped.

"Unfortunately it did not become a tradition," he said. "I was the first and the last Spitzenkandidat," he added.

Von der Leyen went to Brussels on Thursday to meet with Juncker. "It was a friendly meeting between two Europeans who have known each other for years," Juncker's spokesman said, adding that the two leaders had "agreed to stay in close contact."

The vote to confirm von der Leyen's appointment will be held in the European Parliament at a plenary session during the week of July 15. She needs 376 votes for the confirmation.

Only one third of Germans believe their defense minister, Ursula von der Leyen, is a good choice to lead the EU Commission, according to a survey. Many believe the state is too lenient with Neo-Nazis. (04.07.2019)