The eurozone has unanimously approved financial aid for Spain's ailing banking sector. But the aid package has done little to smooth over market fears that the country is heading toward a full-blown bailout. 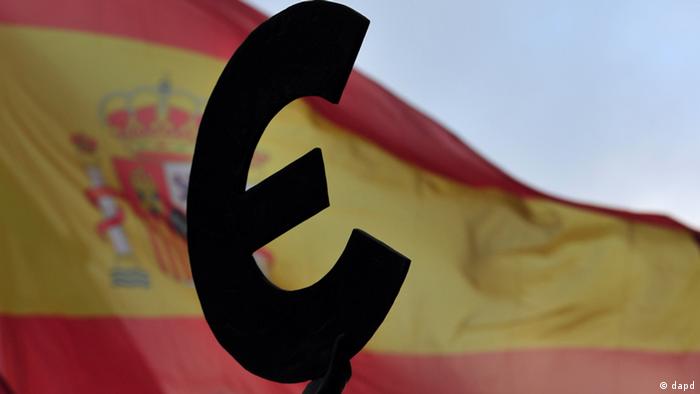 Although eurozone finance ministers on Friday gave the green light to 100 billion euros ($123) in aid for Spanish banks, the announcement did little to stabilize the country's soaring borrowing costs, which have reached their highest level yet.

While EU staffers in Brussels are on vacation, it's a different story in Madrid. Officials there are working into the hot months to fix their economy. But spending cuts and tax hikes might not be enough to end recession. (19.07.2012)

The yield on 10-year Spanish bonds rose to 7.2 percent on Friday, a level considered an unsustainable burden on a country's budget over the long-term. Greece, Portugal and Ireland were forced to seek bailouts when their borrowing costs reached that level.

In another drain on Spain's coffers, the municipality of Valencia has applied to borrow money from a national fund of 18 billion euros, which was setup by Madrid to aid its suffering regions. Stocks tumbled on the news, with the blue-chip eurostoxx 50 index falling 2.7 percent. Madrid's stock exchange was worst hit, with the IBEX 35 index slumping by 5.82 percent, the largest drop of the year.

Meanwhile, the Spanish budget minister, Cristobal Montoro, warned that Spain's recession was expected to continue through 2013, with the economy shrinking 1.5 percent this year and 0.5 percent next year. The Spanish government had originally predicted that the economy would grow by 0.2 percent in 2013.

"For the next year the economic scenario is that the recession will continue, but more softly," Montoro said.

"The implementation of these measures will contribute to significantly strengthen Spain's financial system, an essential step in restoring growth and prosperity in the country," Lagarde said in a press release from Washington.

The first tranche of money, some 30 billion euros, is expected to arrive in Madrid by the end of July. Spain originally sought the aid package when its fourth largest bank, called Bankia, asked for 19 billion euros in state assistance in June.

"This is surprising, especially considering the recent package of savings measures… and the definitive validation of the bank bailout," Daniel Pingarron, a strategist at IG Markets trading group, wrote to the news agency AFP.

"A large number of investors think that the possibility of a break-up of the euro is rising."