Unemployment figures in the eurozone climbed to a record 18.2 million in August as the debt crisis hit deeper. Data released on Monday showed unemployment at its highest level since records were first taken in 1995. 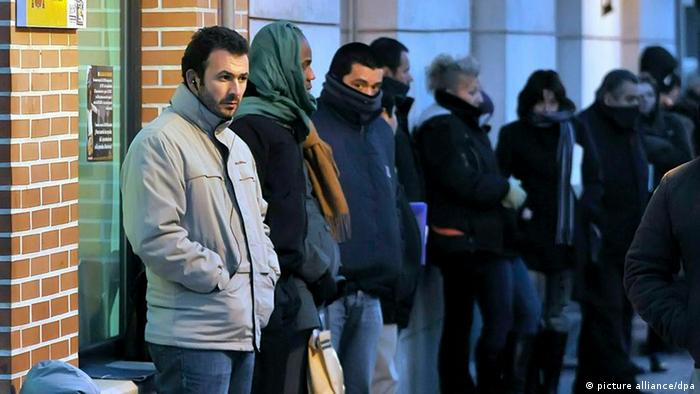 The European Union's Statistics' Office, Eurostat, said a further 34,000 people were registered as redundant in August, when compared to July, as the eurozone jobless total swelled to just short of 18,2 million.

The Eurozone jobless rate has hit another record high

The figure represents an unemployment rate of 11.4 percent, which stands in stark contrast to unemployment rates in other major industrialized nations such as Japan and the United States. Their official jobless rates came in at 4.1 and 8.1 percent respectively in August.

Compared to August last year, Eurostat's latest data show that a staggering 2.1 million people joined the jobless ranks during the 12-month period - a sign that the economic downturn is taking an ever heavier toll on eurozone labor markets.

Jobs in the wider 27-nation European Union are also being increasingly hit by the debt crisis in the euro currency area, according to Eurostat. EU-wide, another 49,000 people became jobless in August, pushing the total to 25.5 million, which equates to 10.5 percent of the EU's available workforce.

Greece and Spain - the two eurozone countries most affected by the debt and economic crisis in Europe - posted the worst figures in August.

In Greece, latest available figures dated July, show unemployment standing at 24.4 percent, with the jobless rate among young people under 25 years of age at 55.4 percent. Spain recorded overall unemployment in August came in at 25.1 percent, and youth unemployment at 52.9 percent.

The lowest unemployment rates were once again posted in Austria at 4.5 percent and Luxembourg with a rate of 5.2 percent. Jobs markets in the Netherlands and Germany were also holding up comparatively well with rates of 5.3 and 5.5 percent respectively.