A press report says several European countries including Germany are considering creating a new and independent funding institution to stabilize the euro. But Berlin denies that the plan is official policy. 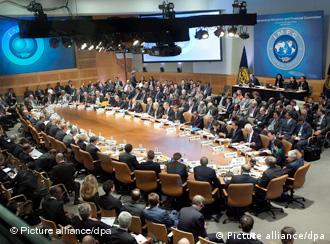 The new institution would work side-by-side with the ECB

Germany is considering a "European stability, growth and investment fund," according to a government paper seen by the Sueddeutsche Zeitung daily. The newspaper said that French Finance Minister Christine Lagarde had called for the 16 eurozone countries to build a strong economic alliance that would explicitly exclude Britain.

Lagarde told the newspaper that London should not be allowed to "hold everyone else up." She also said this "economic government" would have to be consulted if any member state takes a decision that affects the others. 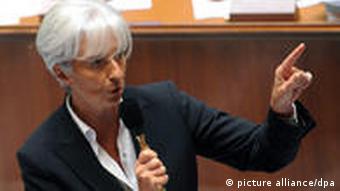 The mooted body would exist side-by-side with the European Central Bank, would benefit from the same independence and be tasked with helping distressed eurozone countries if they meet a list of strict conditions.

Governments that need to borrow from the fund would have to put up solid collateral such as gold reserves or private bonds, the newspaper said.

The document said such a fund would have an "unlimited capacity for refinancing" and would be proposed to finance ministers in mid-January.

The German finance ministry moved quickly to deny the report.

"The document mentioned in [Thursday's] Sueddeutsche Zeitung comes from considerations made at the working level of the [German finance ministry]," a statement said.

The ministry's leadership has apparently not seen or approved the document, and it does not represent the ministry's position. "This is not the path we're following," the statement said.

In addition to Germany, Finland, France, Ireland and the Netherlands are working on various proposals. German Finance Minister Wolfgang Schaeuble is to discuss the plans with his French counterpart Lagarde on Thursday in Strasbourg, the report said. 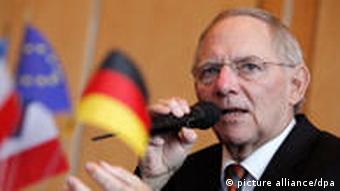 The newspaper quoted Lagarde in a separate article as saying: "We will discuss how we can work more closely together."

The EU set up a 750-billion-euro ($1 trillion) rescue fund with the help of the International Monetary Fund in the fallout from the Greek debt crisis, but it runs for only three years.

At an EU summit earlier this month, leaders agreed to replace the emergency fund with a permanent mechanism from mid-2013 but the precise details are yet to be agreed.

One of the world's largest bond investors, Pimco, suggests financially troubled Greece, Ireland and Portugal should temporarily leave the eurozone to put their economies back on track. (21.12.2010)

The International Monetary Fund has released the latest installment of Greek emergency loans, and lauded the country's cost-cutting progress. The IMF also warned of tough times ahead for Greece, and debt-laden Ireland. (18.12.2010)

Opinion: Heading in the right direction, but eurozone stability won't be easy

As Angela Merkel tries to harmonize European economic policy, one should expect a lot more discord, according to Christoph Hasselbach, Deutsche Welle's Brussels correspondent. A prime example is the euro bonds dispute. (17.12.2010)