From this year on, votes cast by professional juries and viewers in each country will be announced separately. Organizers hope that the change will help keep viewers guessing about who has won until the end. 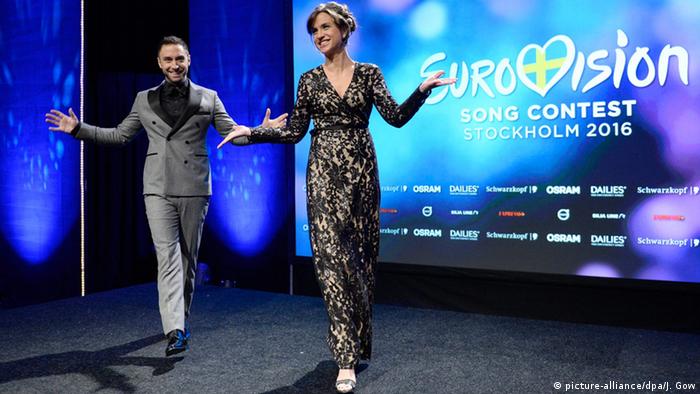 Eurovision officials said the current voting system ruined the surprise for viewers, as it often becomes apparent who has won long before the end of the marathon finale show, which usually lasts over three hours.

Up till now, each country has presented a single set of votes, meaning that it was possible for one or two acts to quickly build an unassailable lead, leading to a premature climax for the kitsch music spectacle.

Germany to send one of these 10 musicians to Eurovision

Ten singers have been nominated for a televised casting show to select Germany's 2016 Eurovision Song Contest contestant. After achieving "zéro points" at last year's ESC, will Germany pick a winner? (12.01.2016)

They picked Xavier Naidoo as the candidate for the world's biggest entertainment show - then dumped him. Do public broadcasters know what they are doing? DW music editor Rick Fulker comments on their strange strategies. (23.11.2015)

Sweden's Mans Zemerlow has won the final of the 60th edition of the Eurovision Song Contest in Vienna, the sixth time the country has won the competition. Facing strong contenders, Germany came away with zero points. (23.05.2015)

"In previous years the winner has been known for up to 20 minutes before the end of voting, and that's not good TV," Martin Osterdahl, the executive producer of the 2016 show in Stockholm, said in a statement late Thursday.

From now on, the presentation of scores will be split between national juries and viewer votes under a system that organizers hope will add more suspense to the big night.

Keeping viewers on the edge of their seats

In a new twist, the highest score of 12 - the competition's famous "douze points" - won't be handed out by the juries until the lower points (one to eight and 10) from all countries have been revealed.

"This format change will inject a new level of excitement into the finish," Osterdahl said.

Votes from all countries will be combined and announced together after the jury scores, meaning an entry could be awarded hundreds of additional points to claim victory in the show's final moments.

Eurovision voting has long been dogged by controversy, with countries accused of awarding the maximum 12 points to neighbors and allies rather than according to the acts' musical merits.

This year's contest will be held in the Swedish capital of Stockholm, after Mans Zemerlow won the country its sixth crown last year.