The world's most avidly-watched entertainment show is bound to rile at least some of its 200 million viewers. Here's what has made blood boil in 61 years of ESC history.

The Russian boycott of this year's Eurovision Song Contest was the culmination of months of escalating tensions between Russia and Ukraine over the contest. But as a look back over six decades of ESC history shows, controversies big and small have often swirled around the event.

1956: The very first Eurovision Song Contest, then called the "Grand Prix Eurovision de la Chanson," is held in Lugano, Switzerland - and the host country wins, personified by singer Lys Assia. But some cry "Unfair!" when it's revealed that cash-strapped Luxembourg, unable to afford to send its own jury delegation to Lugano, had instead asked Switzerland's jury to cast its votes on Luxembourg's behalf. Did that distort the final result? No records of the jury voting back in 1956 exist today. 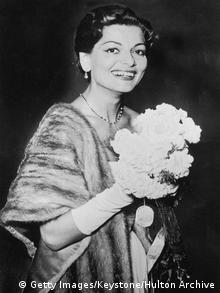 1957: Danish contestants Birthe Wilke and Gustav Winckler share an eleven-second televised kiss. 60 years ago, that was the stuff of scandals.

1968: Yugoslavia casts its vote for Spain, tipping the balance in favor of the country then ruled by dictator Francisco Franco. Years later, news emerges that Franco is said to have bribed Eurovision judges all over Europe, hoping that a win for Spain would enhance the country's image. The truth? Or just one of the many conspiracy theories that have swirled around Eurovision down through the decades? We may never know.

1969: Four countries win the contest: Spain, Great Britain, The Netherlands and France. After that, the point allocation rules are changed - only one of many times in song contest history.

1974: If not inciting a revolution, Eurovision at least sets the timetable. It's the year of the Carnation Revolution in Portugal, ruled by dictator Marcelo Caetano. Resistance fighters plot his overthrow and secretly agree for revolutionaries to storm the country's courthouses when Portugal's song entry "E Depois do Adeus" (And After the Farewell) sounds out on TV. The revolution is a success, but not the song: singer Paulo de Carvalho comes in 14th out of 17 contestants.

1978: Refusing to acknowledge Israel's participation in the event, broadcasters in Arab countries switch to advertising every time the Israeli act comes onscreen. That becomes increasingly difficult when Israel leads the fray during the voting tally - and when it wins, the Jordan broadcaster declares Belgium the winner. 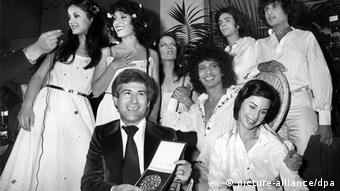 Alpha Beta took the prize for Israel in 1978

1979: "Dschingis Khan" (Gengis Khan) is Germany's entry. That may sound innocuous, but to some, it has ominous overtones: with the contest taking place in Israel, Germany is seemingly singing the praises of a maurading dictator.

1982: Whatever could be scandalous about "Ein bisschen Frieden" (A Little Peace)? For some pacifists, Nicole's entry - which wins the Eurovision prize for Germany - doesn't go far enough. It's a scandal, they cry in the throes of Cold War angst: Nicole should have advocated "total peace."

1986: And the winner is: Sandra Kim. A very mature 13-year-old, the Belgian is the youngest winner in ESC history. But her management had falsely declared her 15. In the wake of this, the minimum age for participation is set even higher: 16. 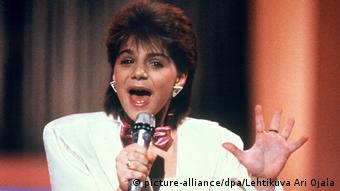 The makeup made her look older, but Sandra Kim was only 13

1998: All eyes and ears are pointed toward Dana International from Israel. But she is a he - or at least that's how they declared the complex issue of gender identity back then. For ultra-orthodox Jews, it's an outrage. Defying them, Dana not only participates. She wins.

2009: Georgia's entry "We Don't Wanna Put In" disqualifies the country because the last two words sound a lot like "Putin" - and at Eurovision, political statements are verboten. And there just happens to be a military conflict going on between Georgia and Russia at the time.

Also in 2009: The BBC reports that in Azerbaijan, people who voted for Armenia (with an ongoing conflict between those two countries, too) are questioned by state authorities. Mobile phone service providers had reportedly traced their votes. Following an investigation by the EBU (European Broadcasting Union, the host of the ESC event), a new rule is established prohibiting mobile phone providers from sharing their clients' voting patterns or personal information. 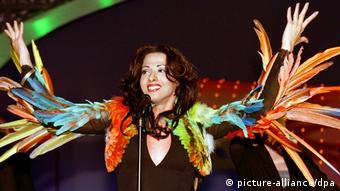 2009: Sprucing up the city for Eurovision tourists, Moscow rids the streets of large numbers of stray dogs and cats, says the Russian division of the WWF (World Wildlife Fund). Incidentally, the same was said about the Ukranian city of Kyiv in the run-up to this year's event.

2013: Germany's entry, Cascada, is said to have plagiarized their ESC song. An expert commission comes to a different conclusion. Does the controversy perhaps have to do with the fact that popular music - especially the kind tailored for Eurovision - is sounding more and more the same these days?

From here on, incidentally, we find scandals every year, and sometimes more than one. Are we witnessing a decline of fair-minded behavior along with increasing European tensions? Or is it more about past scandals gradually fading from memory? Maybe a bit of both…

2014: Ten seconds of booing for Russia's act from the moment they appear, so it's not about the performance. It's about the annexation of Crimea. 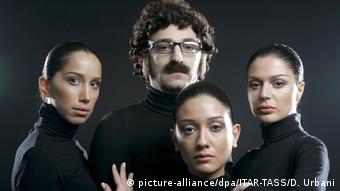 Tough luck for Stephane & 3G of Georgia, whose song was deemed political

2015: Maybe this only has to do with Germany, but at least here, it's a scandal: in the national finals, Andreas Kümmert wins the televoting only to summarily decline to participate in the upcoming Eurovision Song Contest in Vienna, citing his lack of stamina. Host Barbara Schöneberger looks utterly dumbfounded for a moment, then artfully saves the day in an unprecedented situation by declaring runner-up Ann Sophie the winner. It's a dubious honor for the singer, who goes on to win zero points for Germany - for the first time in 50 years. And if that's not scandalous…

2016: In another disruption at the national level, Xavier Naidoo, a well-known German singer, is delegated to represent his country. Controversy over this decision by public broadcaster NDR immediately erupts on social media: Naidoo, it seems, has a certain proximity to a group of far-right conspiracy theorists and has propagated some of their ideas. Furthermore, some of his texts are considered, to put it mildly, politically incorrect. It's not the social media that bring him down, however, but NDR staffers fearing harm to the broadcaster's reputation. NDR backtracks and returns to the tried-and-true televised casting procedure. Not that that helps in the end: at the subsequent Eurovision finale in Stockholm, Germany lands at the bottom of the heap - again.

Also in 2016: Armenian singer Iveta Mukuchyan is rebuked and nearly disqualified after waving the flag of Nagorno Karabakh in the camera during the semi-finals. That region is disputed between Armenia and Azerbeijan. It's a clear violation of ESC rules prohibiting political statements during the contest. Sometimes, however, the application of that rule is less clear... The end of a dream for Yulia Samoilova?

2016, yet again: Political or not? Russia says yes, the EBU says no. Jamala sings "1944" for her home country Ukraine - and Russia is not pleased, as the story of the deportation of the singer's Tartar grandparents from Crimea in that year appears all too topical, and yes, political. Ruling otherwise, the EBU declares that the song is merely historical and not a call-to-action. But some both inside and outside Russia say that the rule against non-political content was stretched a bit too far. So what happens? The song - and Ukraine - wins. And that brings us to…

2017: Russia's entry, the singer Yulia Samoylova, is banned from participating in this year's contest. The reason: in 2015, she had performed in Russian-annexed Crimea after entering the disputed region via Russia, not Ukraine - for which Ukraine customarily imposes a travel ban. This comes on the heels of ongoing and increasingly bitter bickering between the two countries. On March 23, EBU General Director Ingrid Deltenre sends a letter of protest to the Ukranian Prime Minister, denouncing the travel ban and the politicization of the event. On Tuesday, April 4, 2017, Ukranian president Petro Poroshenko upholds the decision. Rumors that several other countries would boycott the Eurovision Song Contest were only that - rumors.

A wheelchair-bound singer is Russia's Eurovision contestant in Kyiv. Ukraine should welcome her, writes Andreas Brenner. (13.03.2017)