More than 350 people in Europe alone have been arrested as part of an investigation into online child abuse. However, the case has drawn criticism from civil liberties groups. US and European police arrested nearly 900 people thought to be connected to an underground child pornography network in a case that has drawn criticism from some civil libertarians.

The announcement of the arrests from the Federal Bureau of Investigation (FBI) and Europol came days after a court sentenced Florida-based Steven Chase, founder of the so-called Playpen pedophilia network, to 30 years in prison. The arrests were in connection with the Playpen network and followed a more-than-two-year investigation into the group's members around the globe that began after Chase's arrest in 2014.

Playpen was accessible in what is known as the "darknet," where internet users can engage in illegal activities using encryption and anonymity software in an effort to hide their identities. The secret network allowed anonymous users to engage in a forum where they could share photos and videos showing the sexual abuse of children.

As part of its investigation, called "Operation Pacifier," the FBI managed to use to malware to seize the Playpen website and server, which allowed authorities to track and identify Playpen users.

Of the 870 people arrested, 368 were in Europe. The investigation also identified at least 259 sexually abused children. 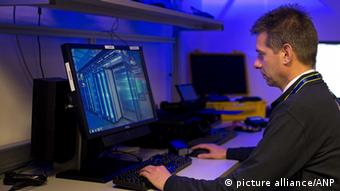 An employee of the European Cybercrime Centre in The Hague

Some privacy advocates criticized the investigation, however, suggesting the FBI may have broken the law by using the malware to identify Playpen's users.

"The warrant here did not identify any particular person to search or seize. Nor did it identify any specific user of the targeted website," the Electronic Frontier Foundation said, according to the AFP news agency.

EFF said the FBI continued operating Playpen servers after seizing them, allowing the exchange of illegal, pornographic images of children and using malware to hack into many users computers and have the computers send identifying information back to authorities. In a 2016 post, the digital rights group said such hacking threatened "to undermine individuals' constitutional privacy protections in personal computers."

Authorities countered that as criminals become more technologically savvy, police needed to use additional tools in their investigations.

"Those individuals involved in the sexual abuse of children are becoming increasingly forensically aware and are actively using the most advanced forms of anonymisation and encryption to avoid detection," said Steven Wilson, head of Europol's Cybercrime Centre, in a statement.

"The internet has no boundaries and does not recognize borders. We need to balance the rights of victims versus the right to privacy. If we operate 19th century legal principles then we are unable to effectively tackle crime at the highest level," he added.

A former archbishop, Jozef Wesolowski, has passed away while awaiting trial for paying for sex with minors, Vatican officials say. He was the highest-ranking Catholic official to face accusations of pedophilia. (28.08.2015)