Europe′s Radical Left Confronts Global Issues and Enemy Within | Europe | News and current affairs from around the continent | DW | 09.04.2007

Europe's radical left-wing groups are at the forefront of demonstrations against international injustice. While the coordination of protests has improved, the radical left continues to suffer from a violent minority. 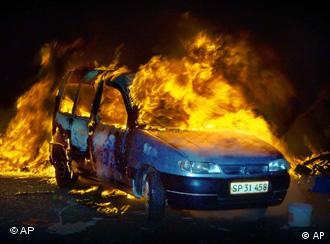 The Easter holiday weekend is one of the traditional protest seasons on the European activist calendar, one which has enjoyed a renaissance in the last few years. After watching attendance figures fall throughout the 1990s, the 2003 invasion of Iraq marked the beginning of a gradual upswing.

The increase of people at the Easter demonstrations over the past four years, and the rise in other high-profile, hugely popular protests suggests that European activists, mainly from the radical left, have more to march against these days.

Opposition to the Iraq war mobilized between six and 10 million people worldwide in 2003 -- three million alone in Rome, while over 300,000 anti-capitalist demonstrators converged on Genoa in 2001. This summer's G8 summit, from June 6 - 8, is expected to attract a similar number in host location Heiligendamm and the surrounding region.

It seems that the left-wing movement in Europe has found a new impetus the like of which has not been seen since the radicalism of the 60s and 70s. Fired by opposition to war, globalization, inequality and threats to the environment, radical left-wing groups are once again making their presence known. 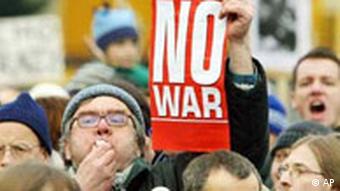 However, war, poverty and inequality are not new issues. The gradual resurgence of the radical left in recent years has as much to do with its organization than an increase in causes to rally around. The cohesion and professionalism involved in bringing a continent's like-minded groups together in one place suggests the work of a coordinated radical left-wing network in Europe.

One organization that claims to play a leading role in mobilizing the radical left across Europe is Globalise Resistance, a non-violent London-based group which has been involved in coordinating many of the continent’s largest demonstrations of the last six years.

"For protests such as the EU and G8 summits, there is an umbrella organization that is established to coordinate such mobilizations," Globalise Resistance's Guy Taylor told DW-WORLD.DE. "More often than not, it is Globalise Resistance that takes that role."

"The radical left has always been better integrated than the far-right as it has historically been supported by states such as the Soviet Union and China," said Professor Cas Mudde, a senior lecturer in political science at the University of Antwerp and an expert on the radical left. "While that state support is not there anymore, the left has a more international ideology and the links remain allowing independent organizations to work together."

Click here to read about the radical left's problem with violence 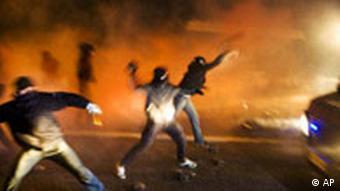 Anarchists attach themselves to left-wing causes

In addition to the improved coordination of groups and the attendances at demonstrations, violence has been another aspect of recent protests which has been on the rise.

The May Day protests in Germany rarely pass without a car or two being set on fire, but it is almost out of tradition that the police allow a few vehicles to be sacrificed to appease the anarchists and avoid confrontation.

At other more international demonstrations, however, violent confrontation has increased in both regularity and intensity. While this could also suggest a coordinated approach, it is something Guy Taylor does not agree with.

"It is very rare that the groups involved in protests come under pressure from certain organizations to react violently," Taylor said. "The effect of being ignored by the politicians annoys some and as a result they see a need of a more 'radical' way of protesting, but this is not an argument that gets a lot of support in our group." 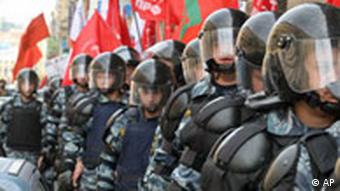 Excessive police force has been blamed for violence

According to him, when a protest turns violent, it is rarely the case that the outbreak has been premeditated or organized by protest groups, since most groups' small size precludes them from large-scale coordination.

"More often than not, the only organization capable of igniting a riot is the police," he said. "Massive protests have passed off peacefully despite radical and angry demonstrators being treated with contempt because the police have been careful not to provoke."

The University of Antwerp's Mudde says the radical left holds very diverse views and tactics, but in general, the majority do not follow a violent ideology. However, anarchists and violent protesters of the so-called Black Bloc movement are violent revolutionaries and are relatively mobile. The Black Bloc is a so-called "affinity group" which comes together during protests. The name comes from the black clothing and masks they wear, which make them appear to be one large mass and also hinders identification by authorities.

They have links through the squatter scene in places like Germany and the Netherlands, but comprise a fairly small group of individuals, as few as 200, which could be described as professional protestors, according to Mudde.

Professor Luke March, an expert on left-wing extremism in Europe, agrees with the view that most left-wing groups are decidedly non-violent and most aren't anti-democratic.

"The violent groups are more correctly usually anarchists, animal rights and radical environmental groups," he said. "These groups may march alongside left-wingers but their concerns are somewhat different and they don't have strong links to them."

Recent examples, such as the riots in Copenhagen over the closing of a youth center which attracted radical left-wing extremists from around Europe, indicate that some activists are willing to travel to violently support causes in other countries. One far-left group which was involved in the Copenhagen demonstrations, the Anarchist Black Cross, organizes protests around the world.

"It must be noted that many moderate left-wingers now stay away from this type of protest," said Mudde. "It is the more radical element that attends."

Left-wing, not far-right, unrest at G8

As the June G8 summit approaches, there are fears of further disorder as left-wing groups are concerned that German right-wing extremists might infiltrate the protests. But Cas Mudde believes that if there is trouble, it will come from the radical left's anarchic factions.

"The far-left and far-right share similar feelings towards globalization," he says. "But they will not mix. They will stage their own demonstrations away from each other, and I believe the far-right extremists will not go in search of confrontation with the left."

Police in Copenhagen Saturday raided numerous houses and arrested 90 suspects, German left-wing agitators among them, to prevent renewed outbreaks of violence after a third night of unrest in the Danish capital. (04.03.2007)

An arson attack on the home of the German deputy finance minister is believed to be the work of militant protesters opposed to the G8 summit slated to take place in Germany next year. (28.12.2006)