Illegal immigrants attempt to cross the Mediterranean sea at a higher risk than ever before. High-tech surveillance systems leave them no choice but to take far more dangerous routes. 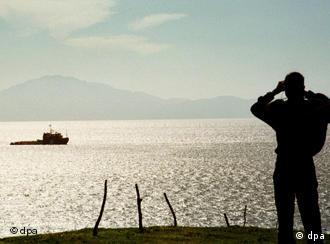 A police officer watching over the straits of Gibraltar

Four weeks ago, the German aid organization Cap Anamur found 37 Africans drifting on open waters in a small dinghy. In the meantime, the organization has shipped the refugees to Italy where they've been taken into custody.

A great deal of journalists and some of the most important Italian and German government authorities are currently caught up in the case. However, the attention surrounding the story will fade away sooner or later, the media will lose interest and the politicians will eventually calm down. 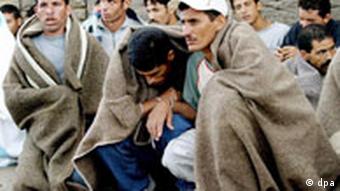 A group of illegal immigrants in Spain.

But immigrants will not give up attempting to cross the Mediterranean sea. Just one week ago, 39 Moroccans tried to bridge over 200 kilometers in order to reach the Canary Island of Fuerteventura.

This route is considered to be particularly dangerous due to very unpredictable sea conditions. The refugees barely have a chance of passing through undetected. Two years ago, the Canary Islands established a high-tech surveillance system that can even detect an air bed on the ocean's surface.

In 2002, Sive was installed at the straits of Gibraltar where only 14 kilometers lie between Africa and Europe. It turned out that the system was highly efficient in Spain -- awakening US interest in Sive for the war against terror.

Because of Sive, the number of refugee boats has decreased by half. Sive can also help to locate ships much faster than before, which can be life-saving for people in need of rescue.

The German human rights organization Pro Asyl estimates that, in the last few years alone, around 5,000 people have drowned in the Mediterranean sea. "The only possible solution concerning the refugee problem is to seal Europe off," said Karl Kopp of Pro Asyl.

At the EU summit in Thessaloniki in June 2003, the securing of Europe's borders became a top priority. The heads of state decided to strengthen border patrol by investing a sum of €400 million. Kopp criticizes the continued spending to upgrade Europe's borders when little is done at the source of the problem.

"The refugees should already be caught in African harbors," Kopp said. According to Kopp, Italy has equipped some African countries with the necessary means to patrol their borders, with the result that the number of larger refugee boats has been reduced. But these measures have also resulted in greater numbers of refugees attempting to cross the Mediterranean in smaller, less detectible boats. 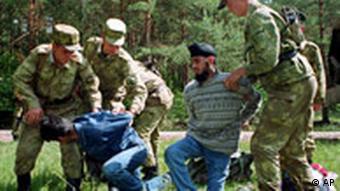 Since EU expansion, Germany has moved to the center of the bloc. The new eastern EU members are now under pressure to improve their patrols on the EU's new external borders.

Pro Asyl fears that the eastern states aren't capable of dealing with the expected wave of immigrants and would to seal themselves off as a result. This kind of behavior would lead to the establishment of refugee camps along the borders of these countries, says Kopp.

Such a development has already occurred in Ukraine. One of the most notorious camps, Payshino, is located on the country's western border. According to a report by Human Rights Watch, hundreds of illegal immigrants are being held in the camp under inhumane conditions.

At a meeting of 10 Mediterranean countries, Europe agreed to boost ties between the wealthier northern states and the poorer south and to help in the fight on terror and stemming the flow of illegal immigration. (Dec. 6, 2003)

The fate of 37 African immigrants now on land in Italy after spending weeks on a German relief ship remains uncertain as Rome and Berlin argue over which country should take them in. (July 13, 2007)

The founder of a German aid group, whose boat helped 37 African asylum-seekers reach Italy this week, has criticized members of his own organization for their handling of the situation in the Mediterranean Sea. (July 15, 2004)