Europeans Hopeful US Democrats Will Rescue Trans-Atlantic Ties | Europe | News and current affairs from around the continent | DW | 24.02.2008

Europeans think the next US president will be better. They hope a Democrat in the White House will reinvigorate trans-Atlantic ties. But the candidates aren't necessarily much more in tune with Europe. 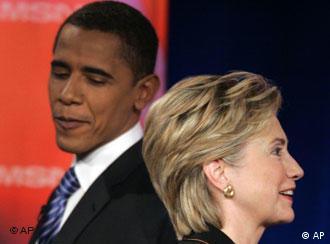 Europe has high hopes for the Democratic presidential hopefuls

Europeans' interest in the US primaries and caucuses is immense: leading German newsmagazine Der Spiegel even devoted its title story to Democrat Barack Obama last week, and the Internet is alive with young Europeans commenting on the campaigns in innumerable blogs and forums. 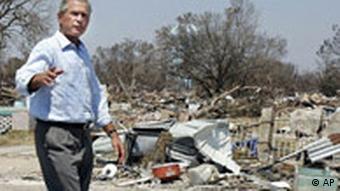 A new president may take a different approach to climate change

Many Europeans connect the election of a new US president with the hope for a new beginning in trans-Atlantic relations, which suffered setbacks due to numerous controversies, from George W. Bush's uncompromising approach to climate change to his foray into the Iraqi desert. To many Europeans, everything will get better once there's a new president. And if he or she is a Democrat, they believe, it's guaranteed.

Regardless of how passionately Europeans follow the duel between Barack Obama and Hillary Clinton, Europe plays a negligible role in the top Democratic contenders' campaigns. Aside from a few sentences in speeches and essays, the two have hardly said a word about Europe.

And according to some, European hopes will likely be dashed.

"A fundamental new evaluation of the trans-Atlantic relationship will not take place," said Esther Brimmer, research director at the Center for Transatlantic Relations (CTR) at Johns Hopkins University in Washington, DC.

But the tone will change.

"Obama and Clinton will make themselves out to be more cooperative, more international. And for every American president, Europe remains the most important partner," Brimmer said.

US won't allow Europe to dictate

On points of contention between the US and Europe, such as climate change or human rights, the Europeans could expect significantly more cooperation than in the past, she added. 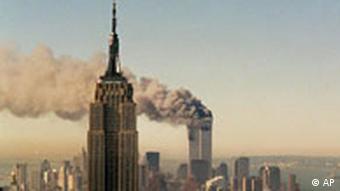 Sept. 11 doesn't loom as large for Europeans as it does for Americans

But whether under a President Obama or a President Clinton, the US would demand the leadership role in fighting climate change. It would also refuse to let the Europeans dictate what should be done, Brimmer said. And it's inconceivable that a new president would ratify the statutes of the International Criminal Court (ICC), an issue that looms large for Europeans.

"With so much military personnel all over the world, the US doesn't want to be subjected to politically motivated accusations from other states at the ICC," Brimmer said.

But a new president wouldn't try to actively thwart the ICC, as the Bush administration did at the start.

And when it comes to Iraq and Iran's nuclear ambitions, a President Obama or Clinton would discuss the issues more closely with the Europeans, Brimmer reckoned.

Obama attracted attention last year by suggesting he would try to engage in direct talks with Iran. Clinton called the suggestion naive.

Brimmer said the biggest difference between the two Democrats in regard to Europe was that Obama wanted to set the course for where the US would be in 30 or 40 years, particularly in terms of climate change and international dialogue. Clinton, on the other hand, was focused on improving America's standing in the world in the near term. 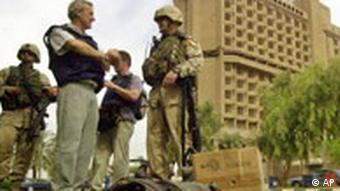 Many have been unimpressed by the Americans' actions in Iraq

This different approach "naturally influences the role Europe plays for the US in the mid-term," Brimmer said.

Though Bush's foreign policy may have caused a storm over the Atlantic, actually there had been a fundamental, structural change in the trans-Atlantic relationship, said Karen Donfried, vice president of the German Marshall Funds of the United States.

"The attacks on Sept. 11, 2001, hit the US at a time when the Europeans -- after the end of the Cold War -- felt safer than ever," she said. The US and Europe had not only developed different interests, but were also no longer united by a common enemy.

Polls reinforce that view: While Americans identify terrorism as the number one threat, Europeans say climate change is the biggest problem.

Finding a common cause

The rise of new 'super powers,' such as China and India could, however, bring Americans and Europeans closer together again, according to Donfried.

"The EU and the US must work together to integrate countries that come from outside this tradition into the global political system they have so clearly molded," she said.

In that sense, Obama and Clinton would certainly view Europeans as effective partners. But the "Europeans would have to finally get their house in order," Donfried said.

"In haggling over a new European constitution and the Lisbon reform treaty, the Europeans were so occupied with themselves that they were neither united enough nor did they have the necessary view of the outside world to be this effective partner," she said.

Expats Around the World Vote in Democratic Primary

Democrats who live outside the US also cast ballots on Super Tuesday. And while voters in the US may be split between Obama and Clinton, the "beer-and-schnitzel" constituency in Berlin was clear about who it preferred. (06.02.2008)

Do you think a change in the White House will result in improved EU-US relations? Please include your name and country in your reply.

The EU will provide funding and support to the prosecutors of the International Criminal Court to help document apparent war crimes in Ukraine and keep Russia responsible, said the EU's Josep Borrell.