The Iowa caucuses kicked off a long, costly presidential primary season in the United States. European experts said they find the US system to be unnecessarily drawn out, expensive and outdated. 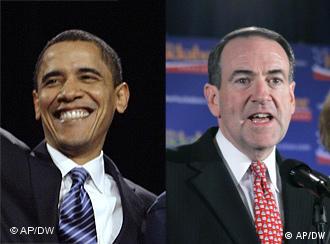 In just over 10 months' time, US voters will elect their next president. Between now and then, election politics will take center stage in the US. Much of the discourse will be civilized: televised debates, town hall meetings and fundraising dinners. But smear campaigns and scandals will also likely elbow their way into the spotlight.

At this point, the field is still wide open on both the Democratic and Republican sides. On Thursday, Jan. 3, party members in Iowa gave their opinions on who should be the next US president, with Democrat Barack Obama and Republican Mike Huckabee taking home their parties' endorsements. By Feb. 5, most other states will have held primaries to determine their preferred candidates.

All about the money 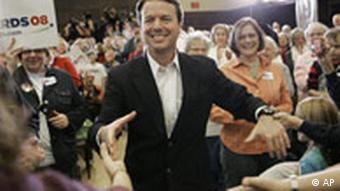 Democrat John Edwards is among his party's frontrunners

"Quite frankly the American democratic system is atavistic," said Frank Unger, an expert on US politics and a professor at the John F. Kennedy Institute, which is part of the Freie University in Berlin. "It's outdated. It doesn't really reflect democracy in a modern sense."

In Iowa, a small number of voters are courted by politicians for months. The entire political circus brings tens of millions of dollars to the state. That so much money and energy would be spent on so few voters is a perfect example of how US elections are money driven, said Thomas Greven of the Berlin-based German Institute for International Relations.

In the last elections, George W. Bush and his challenger John Kerry each raised more than $300 million (203 million euros) for their campaigns. The total amount spent by political action committees, political parties and the candidates is thought to have reached $1 billion. 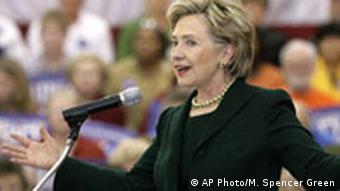 Attempts at campaign finance reform tried to stem the influence of money in politics, but little progress was made, according to a report by the Organization for Security and Cooperation in Europe (OSCE). The group said the efforts were largely circumvented by special interest groups unaffiliated with the candidates spending huge sums on political issue advertising.

The OSCE monitored the last presidential election in 2004 at the invitation of the US government. It's likely that observers will be sent again this year, although an invitation wouldn't come until a few months before the elections, said spokeswoman Urdur Gunnarsdottir. 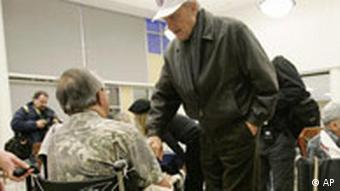 Besides being driven by money, American politics has also become too personalized, Unger said.

"Generally, I feel that the way American democracy developed into the 21st century, if you would judge it objectively, you would say this is not adequate anymore," Unger said.

Unger said recent presidential elections have become a "battle of personalities" where everything is focused on the candidate while important issues have been ignored. Unger said he's hopeful that will change somewhat in this election, though the system works against taking the focus off candidates and putting it on issues.

In parliamentary systems, people vote for political parties, which in turn decide who will fill leadership posts. Unger said he feels the US would be better off if it moved to a proportional system similar to what is used in Germany, where parties get a number of seats in parliament based on their votes.

This allows for a broader range of political parties to be represented in government, which is important for a lively democracy, Unger said.

Calls for a new approach 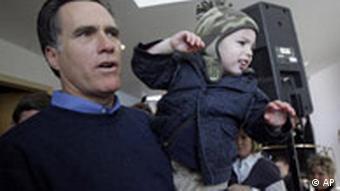 While many are still adopting a wait-and-see attitude until the parties decide on their candidates, Europeans are closely watching the election.

Their hope is that the candidates -- whoever they are -- will understand that even domestic issues, such as climate change or domestic security, have international components and impacts, said Thomas Bauer of the Center for Applied Policy Research at the University of Munich.

Politicians have to understand that "everything is really connected with everything," Bauer said. "There's no option of being isolationist anymore."

Bauer said whether an international approach is taken will depend entirely on which candidates advance to the general elections. Europeans are hopeful, Bauer said, that whoever is at the top of the party tickets will realize the importance of US policy in a global context.

Just after French President Nicolas Sarkozy flies out of the US, German Chancellor Angela Merkel flies in. Both European leaders have sought to improve their ties with the US, but the trio doesn't agree on everything. (08.11.2007)

Novelist Gary Shteyngart was born in Russia but moved to the US at age seven. Currently in Berlin, he took time off from writing to discuss his latest work and what's going wrong in both of his home countries. (18.10.2007)

What do you think of the US primary system? Don't forget to include your name and country in your reply.