Surveys Show US Image Plummeting in Germany | Germany| News and in-depth reporting from Berlin and beyond | DW | 08.08.2007

Five years after former German Chancellor Schröder refused to join the US in its invasion of Iraq, surveys show that the continuing bloody conflict there has contributed to a growing negative view of America in Germany. 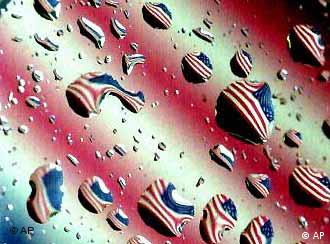 In its latest poll gauging how the US is viewed by other nations, the Washington-based Pew Research Center says that over the past five years, America's image has plummeted throughout much of the world, including sharp drops in favorability among traditional allies in Western Europe.

Richard Wike, senior researcher at the Pew Center, said that "favorable views" of the United States in Germany have nosedived.

"At the start of the decade, according to US State Department polling, 78 percent of Germans had a favorable view of the US," Wike said. "Today, according to the latest Pew Global Attitudes survey, only 30 percent have a favorable view, the lowest percentage of any European country included in the survey." 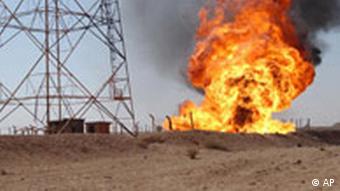 Other surveys that confirm those findings stress that the current poor image of the US is largely linked to its invasion of Iraq in 2003 -- a decision which sparked vocal opposition in countries such as Germany and France.

German weekly magazine Stern published a poll this spring, conducted by the Forsa Institute, which said that 48 percent of Germans believe that the United States is "more dangerous for world peace than Iran."

Manfred Güllner, head of the Forsa Institute, told the online portal stern.de that "since the beginning of the war in Iraq, the image of the US as a power that has no qualms about military interventions and which sees itself as the world police has grown."

While Güllner believes the negative image of the US in Germany is linked to the Iraq war, others suggest that a "latent" anti-American tendency has always existed in the country.

Wolfgang Tönnesmann, a political scientist at the Kaiserslautern-based Atlantic Academy which aims to foster trans-Atlantic dialogue, said that anti-Americanism has existed on both sides of the political spectrum in Germany.

"Some people who disliked the US all along now feel vindicated [because of the war in Iraq]," Tönnesmann said. 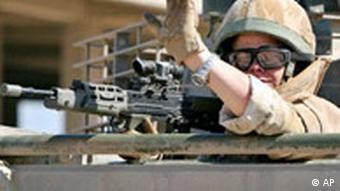 A British soldier, and ally, of the US in Iraq

"Germans don't need American protection anymore (or so they believe)," said Alexander Höse, a foreign policy expert at the University of Cologne. "America is now just seen as the 300-pound gorilla throwing its weight around; nobody likes that."

Höse added that differing views among Americans and Germans on economic and social policies contributed to the problem.

Others, however, say anti-Americanism runs much deeper.

Andrei Markovits, a professor of Comparative Politics and German Studies at the University of Michigan, said not latent, but blatant anti-Americanism is prevalent in both Europe and Germany. 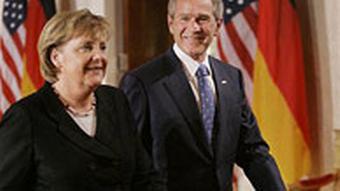 "It is a conflicting emotion that is hard to define, a deep-seated resentment on the part of Germans and Europeans toward America," said Markovits, who has covered the topic extensively in his book "Uncouth Nation: Why Europe Dislikes America."

He says that anti-Americanism is nearly a sport among German intellectuals -- an act of rebellion and subversion which flourishes among the educated elite.

"Europeans don't like the US because it's big, brash, uncouth, vulgar, yet quick," he said. "Then, when it becomes powerful and intervenes in Europe like it did throughout the 20th century, which was to many Europeans' benefit, they don't like it."

His explanation: "America represents modernity from the 19th century onward, and anyone who fears modernity associates that fear with America."

Whether it's fear of US foreign policy or a deeper-seated sentiment against the world's superpower, as some suggest, there's little doubt that ordinary Americans are increasingly confronted with prejudices and hostility in Europe. 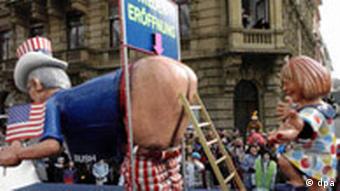 "Americans have a difficult time here right now," Tönnesmann said. "Students in particular get a lot of questions about what their government is doing, and they have to justify themselves, and occasionally Germans show their disrespect or dislike."

Americans in Germany must not just attempt to justify Iraq, but must also address questions about everything from the American penchant for guns, the questionable nature of the death penalty to the lax approach of the nation toward climate protection.

To counter the one-sided image, the German-American Institute at the University of Tübingen has initiated a program called "Rent An American," which arranges for American exchange students to visit local German schools to talk about their view of the US. 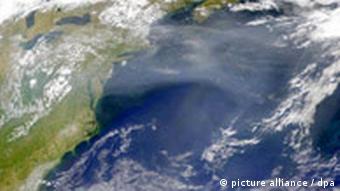 A changing climate in trans-Atlantic ties?

Experts, however, are optimistic that current perceptions of US policies in Europe will not cloud the overriding positive image of America in European minds.

In the end, said Tönnesmann, "Europeans and Americans are not that different; ultimately, they have to rely on what their government tells them.

"We can only hope that most people can realize what America really stands for: that is, multilateralism, liberalism, openness, and compassion."

Wike of the Pew Center agreed.

"Despite their misgivings about the Bush Administration and its policies, Germans still tend to have a positive view of the American people," he said. "Fully 63 percent say they have a favorable view of Americans."

Others point out that the same applies to Americans looking across the Atlantic too.

Germany's Solidarity With US Waning After Sept. 11

After the attacks on the USA in 2001, Germany's readiness to help knew no limits. Five years later, this is no longer the case. The feeling of security in Germany, however, remains strong. (11.09.2006)

Sept. 11 shook Americans inside and outside the US. For those abroad, "home" had suddenly become unsafe. Five years on, ex-pats in Germany and other European countries still feel uneasy --because of anti-Americanism. (04.09.2006)