Europeans ′Blockupy′ the ECB in Frankfurt | Germany| News and in-depth reporting from Berlin and beyond | DW | 31.05.2013

Thousands have converged on Frankfurt to shut down key financial institutions this week. Their reasons may vary, including frustration with banks and the EU, but Europeans are uniting around the Blockupy movement. 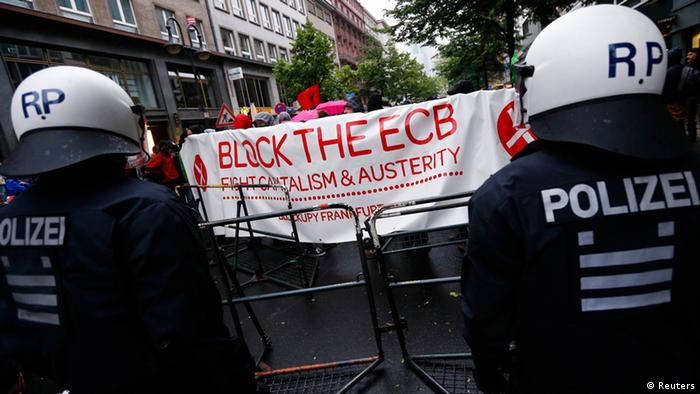 Among the estimated 2,500 people taking part in Blockupy Frankfurt on May 31 was Elanora, who traveled there from her home in Naples, Italy. The young woman, who preferred to withhold her surname, is a member of an Italian social action group called Global Project. The group flew to Frankfurt to protest EU-wide austerity measures in front of the European Central Bank.

"You look at the statistics of unemployment and welfare in south Italy and you discover that we are poorer than the Greeks. So we're suffering under austerity very much," she told DW, explaining why she and her fellow Italians were joining the protests.

The Italians were flanked by representatives from other countries in southern Europe, all who came to voice frustration over EU economic policies, which they feel have resulted in deteriorating social conditions back home.

Where the money is

For the 42-year-old professor Nicole, currently residing in Lieges, Belgium, the trip to Germany's banking capital served as a demonstration of solidarity for friends and family back in his home country Spain. "Fifty percent of youths are unemployed there," he told DW. "People are eating trash. They're self-immolating. Last week there was a police officer who stabbed a banker."

Previously, Nicole took part in a demonstration that blocked the European Commission in Brussels. But Frankfurt, he said, was an important location. "In Brussels you have the politicians. Here is where the money is."

Participants at Blockupy Frankfurt are proud to attend the event and speak up for those who couldn't afford to travel the distance. For 25-year-old Antonia from Thessaloniki, Greece, it was important to participate on behalf of her countrymen.

"For me it's important to speak up. Being Greek, I can understand how the people of my country feel."

Founded in 2012, Germany's Blockupy is not a movement in itself but an alliance of national European movements. Its primary annual event, Blockupy Frankfurt, brings those groups together for six days. The climax includes the attempted shuttering of the ECB.

"What's unique about Blockupy is that it's not organized from anyone above - that every possible group, with different topics that are related to the crisis somehow - that they come to Frankfurt and bring those protests with them," said Ani Dießelmann, a volunteer spokesperson for Blockupy, in an interview with DW. 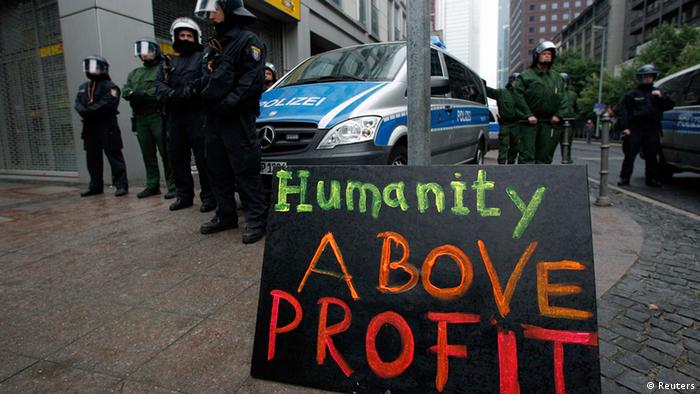 Anti-capitalism slogans are common. But it is not always clear what kind of reforms the activists want

As a result of its open mandate, Blockupy suffers the same criticisms as Occupy - namely, that it lacks a unified message or clear set of policy proposals. Anti-capitalism slogans are common. But while few appear to want a return to national currencies and abolition of the euro, it is not always clear what kinds of reforms they would like to see.

Dießelmann views things differently. Though she's quick to point out that her own involvement in Germany's Interventionistische Linke ["Interventionist Left"] means that she can't always speak objectively on behalf of all groups participating in Blockupy, she does see a common theme.

"Beyond questions of 'crisis' and fiscal policy, we're asking how political power can be organized so that it can be called democratic," she said.

Yet beyond that desire for greater democratic accountability in the European Union, Blockupy Frankfurt plays a more important role for the groups involved. With more than 30 lectures, roundtables, workshops and a handful of concerts to boot, it provides an annual exchange of pan-European grassroots political ideas and tactics, something many national groups feel has been missing.

"You can block [the ECB] for a day and you create a precedent for other groups to direct action like that," said Avout, a Dutch member of the International Socialists group who traveled to Frankfurt for the event. "On the other hand, it's also important to have communication with each other and build networks. Because the crisis is coming from Europe, we should also organize Europe-wide all and Blockupy is a very good reason to do that," he told DW.

In addition to networking, Professor Nicole views the gathering as an effective show of solidarity. "If you go to the gatherings in the camps, that's where you'll see people from Italy, Belgium, from France. Of course there are a lot of Germans. But people have come from everywhere."

He also views June 1 protests that will take place in 70 European cities, as a kind of "Thank you" from countries in Southern Europe. "People have said, 'First we're going to take on Frankfurt.' And then the Portuguese and Spanish said, 'OK, on the 1st of June, since we don't have the money to travel, let's take to the streets in our own city."

'Indignados' continue protest behind the scenes

Long before the Occupy movement besieged Wall Street a year ago, the 'Indignados‘ set up their tents in the center of Madrid. The tents have gone and the Spanish people’s protest movement has become less visible. (18.09.2012)

Fewer 14-to-19-year-olds express an interest in political parties, politicians and parliaments. But researchers in Germany say that doesn't mean they're turning into an apolitical generation. (12.08.2012)