The EU has expanded a ban on three neonicotinoid pesticides, now completely barring their use outside. The vote comes after the EU's food safety watchdog found the pesticides pose a risk to bees. 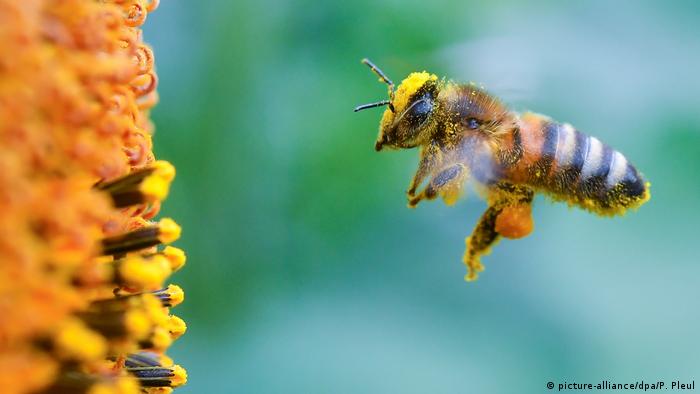 An expert panel of representatives from the European Union's 28 member states voted on Friday in favor of extending a ban on three neonicotinoid pesticides that researchers warned have negative impacts on bee populations.

The approved proposal calls for a full outdoor ban of three substances: imidacloprid which was developed by Germany's Bayer CropScience, clothianidin created by Bayer CropScience and Japan's Takeda Chemical Industries, as well as thiamethoxam from Switzerland's Syngenta.

"All outdoor uses will be banned and the neonicotinoids in question will only be allowed in permanent greenhouses where exposure of bees is not expected," the statement said.

The three neonicotinoids, a class of pesticides based on the chemical structure of nicotine, have been widely used in agriculture over the past 20 years.

Unlike other pesticides which remain on the surface of plant foliage, neonicotinoids are absorbed into the plants, meaning that they kill off aphids and grubs, but also have an impact on other insects as well.

In February, the European Food Safety Authority released a report stating that "most uses" of the neonicotinoid pesticides posed a serious risk to bees.

Other studies found that the chemicals can lower bees' resistance to disease and causes them to become disoriented, meaning they cannot find their way back to their hives.

Bees dying off in Romania