Pop and rock songs form a soundtrack to the story that leads from the Cold War to peaceful revolution in eastern Europe. Twenty years after the fall of the Berlin Wall, celebrity musicians remember November 9, 1989. 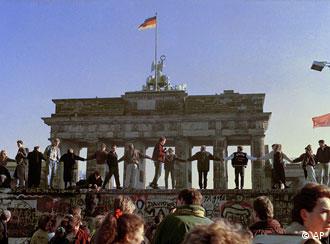 By November 9, 1989, Berliners were singing and dancing atop the Berlin Wall

Twenty years ago, the eyes of the world turned to Berlin to witness the images that have since become iconic symbols of peaceful revolution. Pop music also played a role in that momentous and moving story, reflecting the mood of events from the Cold War to the collapse of communism and German reunification.

Back in 1983 and 1984, in an era of rising Cold War tensions, the song "99 Luftballons," known in the English speaking world as "99 Red Balloons," was a global hit for West German pop star Nena. The lyrics were inspired by the image of balloons floating over the Berlin Wall, which triggered 99 years of war and left the planet in ruins. 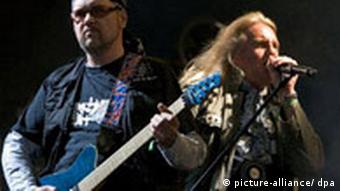 Like English hard rockers "Saxon," some of the key musicians weren't German

In 1988, shortly before a revolutionary wave welled up in Poland and washed through Hungary, East Germany, Czechoslovakia and virtually all the Soviet satellite states, English heavy metal outfit Saxon released a song called "For Whom the Bell Tolls." Saxon’s song eerily predicts events in Berlin in 1989: "A city divided, the West and the East. Tear down the walls, and give them release. People are marching, they're out in the streets, shouting for freedom, shouting for peace."

March and shout is precisely what hundreds of thousands of East Germans did at demonstrations demanding change and civil liberties in the autumn of 1989. They were also listening to restive rock music.

The sounds of freedom

Puhdys were one of the best-loved bands in East Germany, but like all artists in the country, they had to bow to the censors. Their 1989 album contains songs with titles that translate to "Free Like the Wind" and "New Heroes," songs with carefully formulated lines anticipating the change to come. Well before that, however, their 1984 release "Ich will nicht vergessen" (I Don’t Want to Forget) addresses what it means to be German and the division between those "here" and "there." Despite Puhdys’ good standing with the regime, the song was banned from TV and radio but became a kind of secret anthem for many in the East.

In the summers of 1987 and 1988, music had helped to stir unrest in the East. Major concerts by Pink Floyd, David Bowie and Michael Jackson were held close to the western side of the Wall. East Berliners wanted to get up close to listen. None of this went down well with authorities, and it caused political fallout and even violent skirmishes. 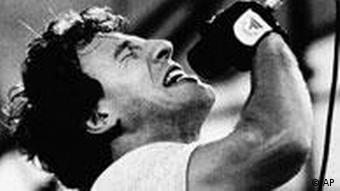 Born in the USA but big in Berlin: Bruce Springsteen

In July 1988, US singer/songwriter Bruce Springsteen received permission to perform in East Berlin. The Communists considered him a working class hero and at the time also wanted to polish up the state’s appeal to its citizens. Performing for 160,000 East Germans, Springsteen called out to the crowd: "I want to tell you I'm not here for or against any government, I came to play rock 'n' roll for you East Berliners in the hope that one day all the barriers will be torn down." He spoke in German and the crowd went wild before Springsteen launched into a cover of Bob Dylan’s "Chimes of Freedom."

The following year, East Germans drained the state of its life blood, fleeing via neighboring Hungary and Czechoslovakia. The world tensely looked on, wondering if it all might end in a violent crackdown reminiscent of Tiananmen Square in China earlier in 1989. East German rock stars released and often recited daring criticism of the government in a paper known as the "Rock Resolution," risking their careers and homes by speaking out but encouraging change nonetheless. 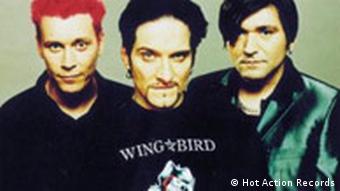 Bela B. of West German punk rock band Die Aerzte vividly remembers the night of November 9, 1989. "I was sitting in my favorite pub, which was unusually empty, which made me wonder. I looked out the window and suddenly saw East German soldiers walk past. I told the bartender, but he just said, ‘That’s it, you’ve had enough to drink!’"

Half an hour later, when an unfamiliar group of punk rockers walked into the bar, Bela B. knew something was up. "They told us that they’d just crossed the wall from East Germany and wanted to check out the famous hot spots," recalled Bela B. His own fame was also legendary in the East. "They recognized me immediately and couldn’t believe their eyes, saying ‘Incredible! We come to this place and the guy from Die Aerzte is sitting right there!’ I spent the rest of the night with them and listened to all their stories. It was a very cool experience."

While many East Germans relished their new-found freedoms, some Westerners were just as excited about being able to travel at will to the East. When the news sank in, West German artist Marius Mueller-Westernhagen started forging plans to perform there.

"Before that I had always refused because they censored lyrics," he said. Westernhagen’s song "Freiheit," which means "Freedom," became an anthem of the era of change in Germany. 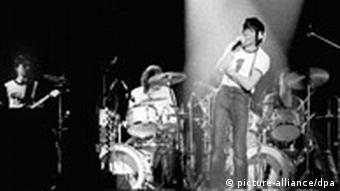 Later, in the years following the fall of the Iron Curtain, issues of identity, solidarity and nostalgia plagued the new Germany. Die Aerzte's 1995 release "Hurra" is an example of a critical commentary on German reunification. But in those initial moments of a divided nation closing the gap, most were optimistic about the future. Ringing in the New Year and a new decade, Berlin was the place to party. For the first time in nearly 30 years, East and West Germans could celebrate together.

In his hard-to-miss jacket studded with blinking lights, US celebrity David Hasselhoff performed at Berlin's Brandenburg Gate. His song "Looking for Freedom" was one of the highest ranking hits of 1989 in Germany.

Today, it's more difficult for the younger generation to relate to the significance of the events of that year. Bill Kaulitz is the lead singer in the popular boy group Tokio Hotel, a band from Magdeburg in former East Germany. "It was never a huge topic for us," he said. "We get asked about it a lot, especially when we travel abroad. Sometimes people have really wild notions about it, asking us if there are bananas where we come from. For us there’s only one Germany, we never knew it any other way."

Bill was just a baby when the Berlin Wall fell and he speaks for many of his twenty-something peers.

Back in 1979, a decade before long lines of East German Trabant cars crossed through the border and strangers tearfully embraced at Brandenburg Gate, English rock group Pink Floyd released their famous rock opera, "The Wall." Singer Roger Waters adapted it into a film a few years later. In a radio interview in July 1989, Waters said he’d only perform it again live if the Berlin Wall came down - which it did, just months later.

True to his word, Waters staged a massive spectacle in July 1990 where the Wall once stood. An estimated 350,000 people attended and the event was broadcast in 52 countries and later released as a live CD, video and DVD.

Before the Berlin Wall came down in 1989, jazz singer Angelika Weiz had to fight to produce songs in English, but her record still was never released due to its criticism of the East German system. (06.11.2009)

As an artist in East Germany, Hans-Hendrik Grimmling painted himself out of "socialist realism" in the GDR. He and five other artists were pioneers in organizing an uncensored exhibition: the First Leipzig Fall Salon. (04.11.2009)