The European Commission's closely-watched Economic Sentiment Indicator has dropped for the sixth straight month. The fall of nearly five points was the worst month-to-month drop since December 2008. 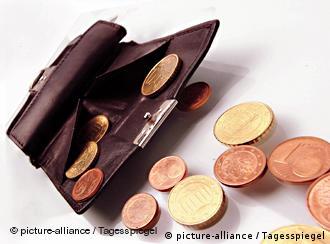 Consumer and economic confidence in Europe has dropped further, according to the results of a survey released by the European Commission on Tuesday.

The Economic Sentiment Indicator (ESI) fell more than expected, from 103.2 in July to 98.3 this month. This represents the biggest month-on-month drop since the onset of the global financial crisis in December 2008.

It's also the sixth straight month the ESI has registered a drop.

Among individual nations in the eurozone, Germany recorded the sharpest drop in consumer confidence, falling from 112.7 to 107. Outside the eurozone, Britain had the biggest drop in the greater European Union, from 98.5 to 92.9.

Analysts had expected German business confidence to drop - but they hadn't reckoned with a drop like the one recorded this August. It's the biggest month-on-month plunge since 2008. (24.08.2011)

German consumer confidence dropped for the first time in 10 months leading up to April, according to a key barometer released Tuesday. The increasing uncertainty came on the back of "uncertain economic conditions." (29.03.2011)

Unrest in the Middle East has cooled investors' enthusiasm for emerging markets. Many are moving their cash back into industrialized economies with much lower interest rates. (02.03.2011)