Some cultural projects manage to become an actual brand. Each year, the Cultural Brand Awards honor the people and institutions that go one step further in promoting Europe's cultural identity.

During an event called the "Night of Cultural Brands," which took place on Thursday evening in Berlin, the European Cultural Brand of the Year 2017 recognition was awarded to the Guggenheim Museum Bilbao.

The 38-member jury of the Cultural Brand Awards chose to honor the museum for the fact that it had positively affected the entire city of Bilbao and its culture. The top-class museum has become a leading cultural brand on the European market, the jury argued.

Bilbao has good reasons to be proud. For 20 years now, the Basque capital has housed one of the world's most famous museums.

The Guggenheim Museum, with its splendid architecture built by Canadian-born architect Frank O. Gehry, has instilled new wealth into an industrial city that had previously been on the decline. By now, the museum attracts roughly one million tourists per year.

The museum's 20th anniversary was celebrated throughout the year. The show "Reflections," a highlight of the celebratory program, was an event held over four nights held in October, during which the building's glass and titan facades were illuminated by a light installation. Star architect Frank Gehry was fascinated by the idea: "The arbitrarily drawn curves of the buildings have been created with the intention of catching light," he said.

How the Guggenheim saved Bilbao's economy

From the 19th century until the 1970s, Bilbao was the most significant industrial port city of the Basque region. With its strategic access to the ocean, Bilbao's economy — based on shipbuilding, as well as coal and steel production — was booming.

However, industries didn't adapt quickly enough to changing technical standards. The outdated dockyards and factories had to close. Factory buildings and ironworks were abandoned.

Bilbao's revival would only come in the early 1990s, when the European offshoot of the Guggenheim museum opened right by the city's river.

Four years later, the entire Nervión region was revived, with its biggest attraction being the Guggenheim Museum. The economic revitalization of the region occurred through culture, a phenomenon described since as the "Bilbao Effect" or "Guggenheim Effect." 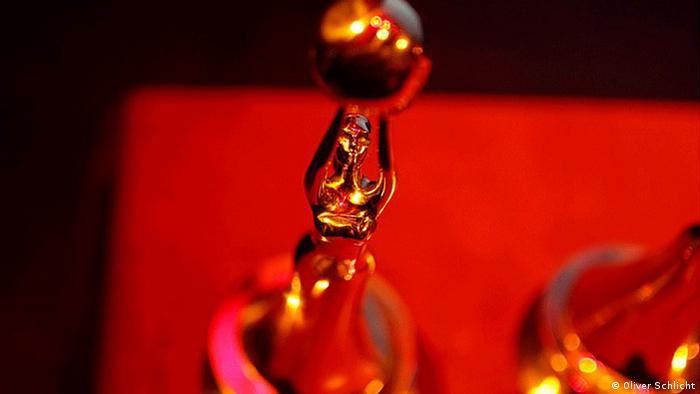 The Aurica stands for cultural excellence

Honoring excellence in the business of culture

Created in 2006, the Cultural Brand Awards' statue, called the Aurica, stands for the excellence, attractiveness and diversity of the European culture market.

Prizes are awarded in seven categories, including for the best marketing strategies deployed by cultural providers, for the most creative culture sponsoring investments into culture, the most innovative education programs and the most dedicated culture managers of the year.

This year, a total of 104 applications came in for the prestigious prize of which 22 were shortlisted.

Along with the Guggenheim Museum, Hamburg's Kulturfabrik Kampnagel and Austria's broadcaster ORF 1 were nominated in the European Cultural Brand of the Year category.

Among the other prize winners are Frances Morris, director of London's Tate Modern, in the category European Culture Manager of the Year 2017, as well as Dr. Gereon Sievernich, director of the Martin Gropius Building in Berlin, who received a special award for his lifetime achievement.

The winner in the category European Cultural Tourism Region of the Year 2017 is the organization NRW e.V. with its project #urbanana, which offers a discovery trip to the hidden cultural treasures of North Rhine-Westphalia.

DW is a media partner of the Cultural Brand Awards.

It looks like a giant lizard sunning itself. The Guggenheim Museum designed by Canadian-American architect Frank Gehry is very much a landmark of the Spanish harbor town of Bilbao. (15.02.2016)

Highlights of the Guggenheim Museum Bilbao

It's not just another epicenter of contemporary art. Two decades ago, the Guggenheim Museum in Bilbao completely changed the city and turned the once dying Basque capital into a modern metropolis. (10.11.2017)

The Guggenheim Museum in Bilbao, created by Frank O. Gehry, celebrates its 20th anniversary. And it is not the only spectacular building by the internationally renowned Canadian architect. (19.10.2017)

International collectors are snapping up his paintings. Amoako Boafo is Ghana´s rising star. But how did the fisherman´s son from Accra become one of the world´s most sought-after contemporary artists?

Beuys would have turned 100 on May 12. Decades after his death, the celebrated postwar conceptual artist continues to polarize critics and the public alike.